It's For a Good Cause 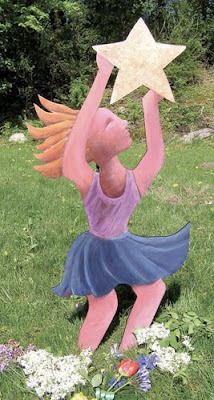 The sculpture to honor Sarah Leary
I knew I was doing a 5K today. As I heard it pouring on the roof last night I kept hoping it would stop. This is what I read last night on Monica's blog (Aaaaahhh!  It's almost the weekend.  All I know is I didn't  pay to get up early, drive a minimum of 30 minutes, be completely nervous, wait in line at a port-o-potty and run.  I get to sleep in. I LOVE, LOVE SLEEPING!!)  I laughed out loud when I read it BUT I did pay to get up early,(actually I paid when I got there, I wasn't even pre-registered and I still went,)  drive almost 1 hour, use a port-o-potty when it was FREEZING out and pouring.  I can't say I got nervous.  I was too cold!!  I got to play the "What should I wear game with T." I ended up wearing shorts and a short sleeve shirt with a "rain resistant" jacket. She had on shorts but brought pants that she changed in to!!!! Oh well, I'm tough I thought before the race began.

In the car before the race questioning our sanity 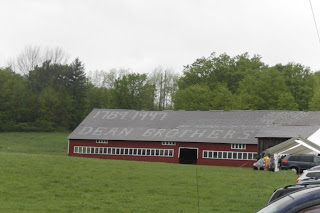 Beautiful barn at the farm where the race began and ended
This is also where the race began when we ran through the field!
But first why was  I there?  I didn't need a race for May. I already ran one and have another one at the end of the month. But the cause for this race just touched me.  Let me give you some of the history.  It was put on by the family of a teenager who died in a car accident last year on Mother's Day. No drugs or drinking were involved simply inexperience.  The race took place at the farm where the accident occurred. There was a beautiful sculpture at the spot, the design of which has also been used on stationary, t-shirts and jewelry.  The race was to benefit a scholarship. Sarah Leary, the student who died particularly loved to travel. The proceeds of the race go to help local high school students travel who otherwise might not be able to.  The artist who designed the sculpture sang the Star Spangled Banner and everyone joined in. Then everyone sang You are My Sunshine. I really choked up at that and I didn't know the girl.  Her brother blew the horn to start the race.  I believe all of her family ran it. It had the feel of a  Susan Komen event.  Many many people walked and had obviously not done something like this before. Going 3.1 miles was a big deal for many people. One young woman did it on crutches and remember it was raining out. One girl did it on roller skates.  It was a very heart warming race. I am sure I am leaving a lot out.  Her mother spoke with a great deal of grace thanking everyone.  So many people turned out on this miserable day.
Back to my race report.  The farm we were at was in a beautiful location.  We couldn't figure out where the race started. The map showed this road we couldn't find.WELL! That is because there was no road.  The first half mile of this race was through a field!  Not with a road, just through a field. Well I worried about falling and got completely soaked. When I came out of the field I felt like I had dead legs half a mile into the race. But the rest of the race was on the road, hilly but bearable.  It was quite pretty even on this overcast day.  When  I looked at my Garmin later I wasn't surprised at my slow first mile (around 9:30) but was surprised at my slow second mile (9:37) because I thought I had picked it up. My last mile was in the 8s with my overall pace being 9:03.  I am always disappointed not to be in the 8s but oh well.  There is always next time.  It was a fun race to see the warmth and caring people showed.  T went with me which is always a plus especially on such  a foul day. About 300 runners were registered but only 200 or so ran. I could give you my race stats - they sound very good overall but so many people weren't runners that the stats are inflated in my favor.  I was 3rd in my age group with T being second. I wanted her to come with me, why??? Just Kidding T. Come to every race with me!!! 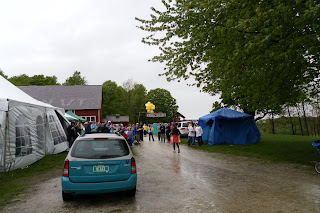 The finish up a short hill 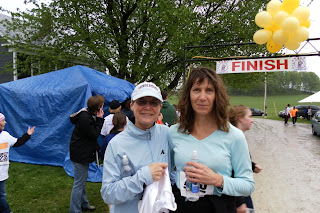 Front of the t-shirt

Once again the sculpture
Posted by ajh at 9:29 PM

What a sad story, but wonderful event. Sounds like it was really aomething special to be a part of - even with the crappy weather.

What a beautiful and touching tribute. Such a tragic loss. Kind of fitting it was raining don't you think?

What a nice way to remember and honor Sarah, no wonder you went through so much to get there! It looks like you had fun too.

Thanks for the wonderful reminder (the day before Mother's Day) to kiss and hug our children more! To tell them how much we love them and how proud they make us!

I'm so honored you included part of my post! Wow!

I often wonder myself why anyone would pay to get up early just to run a 5K (did it myself this weekend), but that race you just did is definitely one I wouldn't think twice about doing.

Great job weathering the elements to run for a cause! Nice scenery, even with the blah skies.

In answer to your question - Sage does not run with us any more - she is 12 and has some physical limitations.

wow, what a wonderful reason to do a race... who cares about the rain when it's all about people caring about one another?

Have a great Mother's day!

That is a great tribute to Sarah and probably a comfort to her family. Good for you for participating despite the ugly weather! Happy Mother's Day!!

A great reason to run. Congrats on the 3rd place AG win!

What a sad story...but, a wonderful event with a great turnout, even with the rain! Congrats to you for participating and running a great race...yay for 3rd place!

Crappy weather for the race but definitely for a good cause, what a horrible story.

Too bad the weather wasn't better. It was cold windy here but at least the rain stopped.

It seems like the rain was so appropriate for the occasion.
Happy Mother's Day.

What a wonderful event to celebrate a life taken way too soon.

What a wonderful reason to run. Way to get out there in the crappy weather/rain! I loved your race report and enjoy the pictures:) Way to take third place...that is awesome!

BTW: Yes, I do think that some of the recent followers were because of the giveaway. Many of them do not run but want a chance to win the giveaway:) You will be at 100 in no time...trust me. I love your blog and I think that you are very inspiring! You leave kind comments that I always enjoy reading! I hope that you had a wonderful Mother's Day!

A very good way to celebrate Sarah. Beautiful pictures, beautiful place and sad story. However as I often say I like to run under the rain.

Congrats on another super run! This is a very special race.

What a nice way to honor that poor girl.

nice job on your run, I had to laugh at the field part.

Hope you had a great Mother's Day!

Totally a race worth running :) Congrats on the AG place - you earned it no matter what!
Have a great week!

what a great race! touching story - i'm glad the event is such a success. congrats on your race and ag award! next time, just trip T around mile 2 or something ;)

What a wonderful cause - a race for Sarah! I absolute love the sculpture (I need one for my garden :)), too. Congratulations on your AG placement - you deserved it after those icky race conditions!! Happy Week to you!!

Oh, and I meant to say thanks for your very kind note on my blog. It's so hard to lose our parents at such a young age - the hardest for me is that my kiddos never got to know her. My dad passed away about 7 years ago so they did know him...but I wonder how many memories my boys, now age 14, will have when they're older. Thanks for sharing that stuff with me :).

That does sound like a good cause, and inflated numbers or no, nice job on 3rd in your AG!

I have not seen a race quite like that..very touching! You ran a great race even though the conditions were less than desirable!

It's nice that you were part of such a personal event.

Congratulations! All local events are inflated in some way, so don't even think about it. I think you did great!

What a wonderful race. I love your new header photo!

What a beautiful race. I think it's great that her family commerates her this way and is giving back to the community.