What a beautiful day in Vermont for a run!  I got up early in spite of many nights without much sleep.  I needed to run TMBs Virtual 10K as part of my 8 mile taper for my half next week. I decided I was going to run it not race it which is much easier to do in a virtual race than in a live race. I decided not  to race it as I am tapering for a half next weekend.  I did not wear knee high socks but wore my flashiest low socks in honor of TMB. I wore my hot pink running shirt and my compression racing shorts.  I felt like I was ready to go! 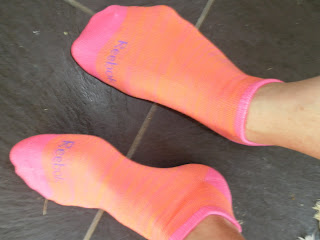 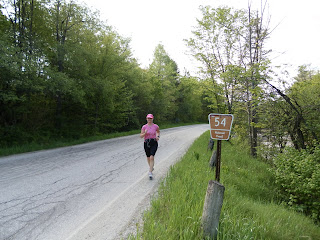 Playing with the self timer
Then I had two more miles to go and apparently I was somewhat in the racing mode as I kept up my faster pace for an overall negative split second half.  My 7th mile was 9:28 and my 8th which is my hard mile was 10:00 flat. I was very happy.  The pace for all 8 was 9:45.  It was a  run that was very easy to do and I could easily imagine going another 5.  I run so much better in the morning especially before it is hot!! 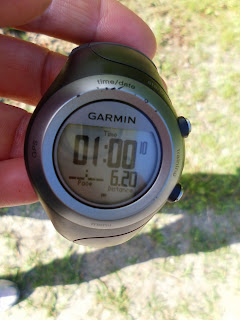 I'll take it! It was a great run.
New York City
Saturday I went to NYC for the day. It is about 5 1/2 hours so it is a lot of traveling. I went with a local group on a bus to see a show. We got there about 10:15 and the show was at 2:00 so we had some time. My friend and I had decided we were going to have a no stress wander around time -see what we see with no plans. We wandered around Times Square and Rockefeller Center playing tourists. 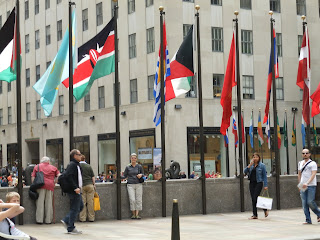 We went by St. Patrick's Cathedral and headed up to Central Park my favorite place of all in NYC! 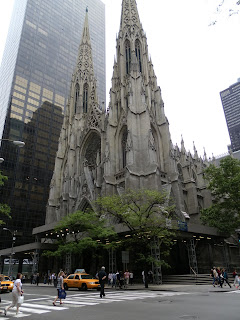 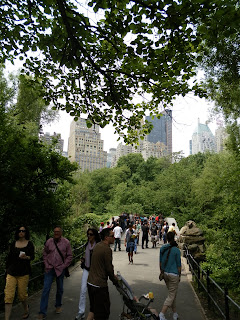 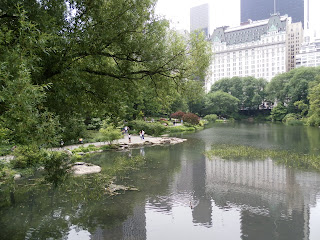 We got some lunch at a deli - nothing special and cheesecake at Roxy's very special!
Then we headed to the show.  It was fabulous. Disney knows how to put on a production.  I got just as much enjoyment from watching the little girl next to me as I did from the actual show. She was probably 5 and dressed so sweetly.  She was so into everything.  We were in the lower balcony.  When Mary Poppins flew up to us at the end I thought her eyes were going to pop out of her head! 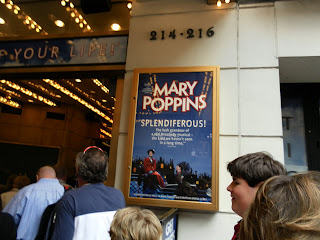 Then back on the bus, a seemingly longer ride home and a late night for me!
Posted by ajh at 4:32 PM

Nice job on your virtual race! I love the pink socks...you were running in style:)

Lucky you getting to go to NYC for the day! I am pretty sure that Central Park will be one of my favorite places too! I would love to run a race in Central Park. You posted some great pictures:) I am glad that you had a blast!

Central Park looks beautiful. One day, when I win the lottery (which will be hard because I never enter) I'd like to visit NYC - maybe do the marathon there.

Nice pics from NYC! What a beatiful city.

Awesome job on your 10K! Love the socks.

Looks like a great weekend!! It think it is so great that you can go to New York with such a short drive!

Good job on your 8 mile run! You are ready for the half next weekend and you'll do great. Love the NYC pix. I'll get there some day. Have a great week!

I LOVE NYC! I live about 2 hours away and go quite often. I love seeing shows there :)

NIce job on the race and the 8 miles! Sounds like a fun trip too.

BTW, I got your email and will respond soon. Also, looks like we might be in Vermont in October for Harpoon's Oktoberfest!

Nice run and great time! I love the NYC pics. NYC is on my list to visit one day.

Great job on the runs! Hot pink socks work for me!

You asked what I learned in my race and I would say definitely to take it easy in the first half. I felt so much better in the second half when I picked it up. Also, not to put so much pressure on myself. I think I push it to hard and crash at the end. If I am more relaxed I run better and enjoy it!

Nice run!!! Great pace! And those socks are awesome!
Jealous you got to see MP, one of my favs from childhood :)

Great run!! It looks like a great, albeit quick, trip to the City.

Nice job on your virtual 10K!

I want to go to NYC, so bad! I've never been but heard that it is something to experience.

Great job on the race and pics! Congrats on your giveaway win, too.

Great pace on your race! NYC is great and I love broadway! Mary Poppins sounds amazing...and I would totally have enjoyed watching that little girl's wonder :)

Actually, I used to travel to different Native communities and do assessments in the schools. The time I'm talking about, I was in Waswanippi! I've never been to Mistassini, but some of my colleagues would go.

Great job on your virtual run.

New York and a show man i am jealous. :)

I hope I can bring my kids to May Poppins, we missed the Little Mermaid....I totally know what you mean about watching their little faces!