St. Patrick's Day 8K and A Bloggy Meet Up! 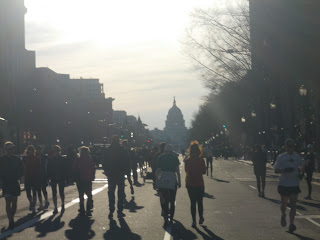 Before the race start -the Capitol in the distance

This was my fourth race of the year.  Guess how many have been in Vermont?  A big fat zero.  Two were in New York, one in New Hampshire and now one in DC.  Yeah, I travel for races.

The weather on race day was the nicest one of my days here in DC.  I hadn't brought a lot of clothes so there wasn't too much agony over what to wear.  Capris, short sleeve shirt and a long 1/4 zip for before and after the race. I tied it around my waist to avoid a bag check which worked just fine. 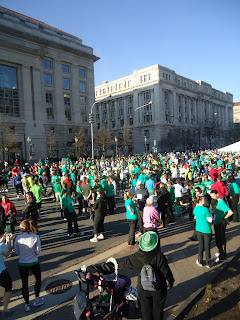 Before the race start

First problem though- I stopped to use the Port a let as soon as we got there and got separated from Emily.  I never found her again before the race started.  She was looking for me too but no go.  I did see her when we met when the race wound back on itself  which was great. I didn't check my watch a whole lot and just tried to keep pushing. I was tired from all of our running, walking and fine dining but hoped to get in the 9s, lower being better.  We went by the Capitol many many times.  I didn't realize how many times we would meet the faster runners.  I was feeling great about how many people were behind me when I found out they started in waves and therefore after I did. I confess I was in the first wave as I was trying to find Emily. 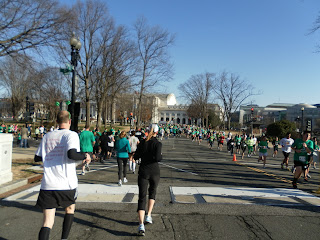 Meeting the other racers 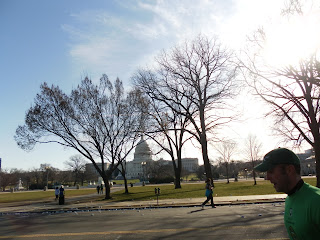 One of many times we could see the Capitol

When we got to the 5K point my time was okay.  As always it seems  better if you go by Garmin then the race stats but here goes. Of course I have never done an 8K so that would be a personal best.  But my Garmin clocked it at 5.03 so no personal best there.

I was getting tired as the race was near the end but I could see the finish line.  There were the balloons.  Wait, wait, Noooooo, we made a turn and went down a little side street to turn around and come back and then head to the balloons.  That was not a happy feeling once I realized that.  But I made it to the end and quickly reconnected with Emily. 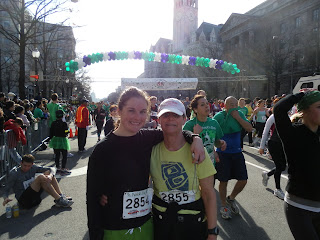 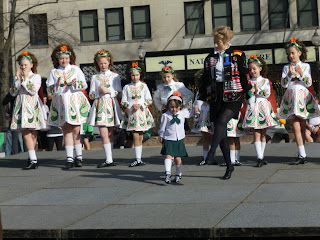 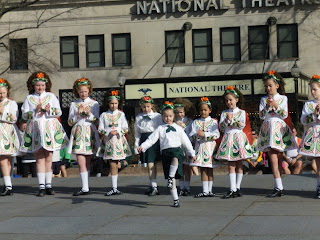 After the race was over I got to meet DASH!  I loved meeting her and her friend, Liz.  Both of them know Emily so there were lots of connections here.  We chatted for quite awhile over coffee (in my case) at Starbucks.  Dash and Liz might be heading up to Maine to do a really fun half in the fall.  (All Women and One Lucky Guy) It is a great course and I highly recommend it. Bar injury I will be there this year.  Anyone else interested? 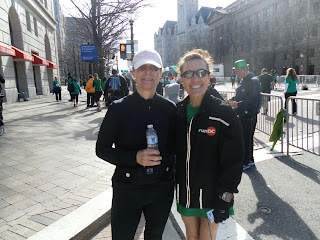 A bloggy meet up with Dash! 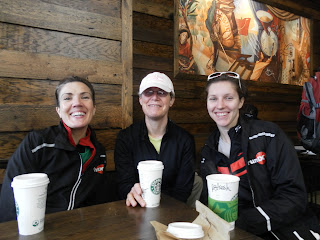 Having coffee with Dash and Liz 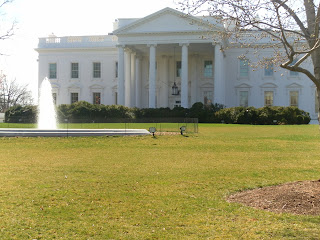 Walking home from the race - my first time walking alone,
I am very good on the Metro BUT..... 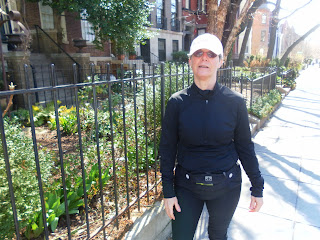 I got lost twice and man am I tired when I get home.
But we went out to eat - a great brunch and then just laid low before I went to the airport ridiculously early - that's me!  I slept most of the way back before landing and returning to................snow, snow, snow.  Yes, a lot melted this weekend but there is still plenty around.  Last night it was cold, dark, snowy, cold, dark, snowy, cold, dark. snowy. I just wasn't feeling my usual love for Vermont.
Today I did a lot of yawning at school, I do much better on more sleep than 4 hours.  After school I was going to head to the gym but it felt rather spring like out so I came home and ran outside.  As tired as I was it seemed like it would be much less painful outside...........and I was right. 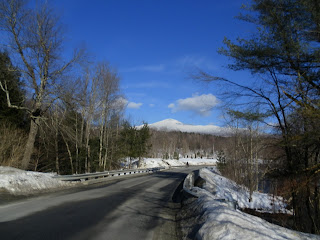 Yes, DC was great but Vermont's not too shabby either!
Posted by ajh at 8:54 PM

I may be interested in that Maine race this year.

I loved the pictures from both you and Emily! I notice she posted more panda pictures and you posted more people...you two are so cute!
I loved the Irish dancing girls, especially the tiny one :) !
Congrats on your race, you did a wonderful job!

Great pictures, as usual. I really dislike when races psych the runners out like that...just when you think you're near the finish, but no...not yet... Argh! Congrats on another race on the road!

Great race and pictures! I'm so glad you had a fun weekend with Emily.

You and your daughter look so cute! And ditto on seeing the finish line, only to run away from it and them back - ughh!

Nothing gets me more excited than St. Patty's Day and a race for such an occasion is always so fun. This year was the first in 10 that I didn't get to do it....so I'm glad you ran for me :). Nice job on the race and SO glad you found you way back home :). A race in DC would be so much fun!!

It was 73 degrees here last week in Denver. Oh, maybe I shouldn't mention that!! Hehe.

Glad to see you two having fun together! BTW, did you try the new Red Velvet Whoopi Pies at Starbucks yet??? Ummm, good! Have a great week!

What a fun race that has been with everybody dressed in green. And a blogger meet too: perfect day for you!

Wow! Sounds like you had a great race and a great trip visiting Emily!

Washington looks like a great city to run in. Sounds as though you had a good holiday!

I wish my Mom would take up running! You guys are so cool together. Congrats a good race! Cheers!

Where do you get the energy?? I got tired reading about your activities. The half you mentioned is now in Mass. not Maine & not as hilly.

Love that last picture! All blue skies with the snow - lovely!

It was so nice meeting you. And I'm so sorry you got lost--I should have dropped you off. At least it was a beautiful day for a walk. See you in November :)

It sounds like a great race and a fun-filled weekend in DC! I loved the pictures.

you had beautiful weather for the race, much better than all that snow!! nice job!

Great pics again. I am glad you had a great time in D.C. and tha tyou made it home safely. Hopefully, you will have spring weather real soon.

I am not a fan of finish line teases!! Congrats on a great race!

Yay! I'm so glad I got to meet you!! I will def let you know about the Maine race, it would be so much fun!

We should have warned you about that sneaky finish. Congrats on your race!

Great race and I LOVE the pics!

Great job on your race! The pictures were beautiful as always :)

Cool race. I like Garmin pace better, don't you?
Oh, you do get tired. Now that is news to me. :)

you're so awesome, you can't be bothered to 'just' run a race at home ;)

there was a team called "11 women running wild and one lucky guy" at the ragnar i did in jan! i wonder if it's the same team... small world, if it is.

I always love reading your race recaps! You did good, especially considering the time on your feet and good food before the race ;) Your weekends with Em are always such fun to read about.

How amazing to run a race with your daughter. That would be awesome if my kid would do that. I think she'd rather go to the Dentist.

So didn't you meet Dash's Mom? I love her. I mean Dash and her Mom.

Great run, well done! I love it when we can see the other runners and sometimes the leaders in a race. Sounds like you had a perfect time with Emily. Hope you've had some good sleep by now!

Great and fun race on the road! Fourth race of the year (less than three months). That's great, considering that you ran those four races in winter time.

I'm glad you enjoed the race and had a good time on a sunny morning. Beautiful report!
I wouldn' mind a cup of that coffee :)