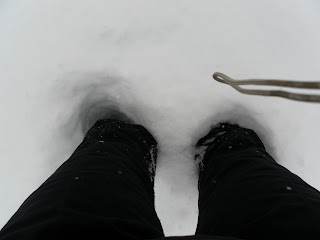 Looking down - in the snow up to my knees
here
Yesterday and today we had the 5th biggest snowstorm in the history of Vermont. It basically shut Vermont down and we aren't wimps here.  If people are staying home you know it is a bad one.
Even my husband didn't go to work. I knew last night that school was cancelled actually much to my dismay. I had all my parent conferences scheduled for today and tomorrow.  That way when I go to DC at the end of the week they would be done and off my mind.  Well, not only did we not have school today, we already know we don't have it tomorrow.  They need it for snow removal. Which truthfully I get!  So I have stopped stressing.  I emailed all my parents I could to try to start rescheduling for Wednesday.  Most will probably be next week when I come back and that is just how it is.

How did  I spend today's snow day?  I spent the first half in bed, reading blogs, watching Lost, going on FB, all kinds of productive things.  Then I got up and fueled for my run.  I fueled with jelly beans.  Not the sports kind.  My husband laughed when I told him I was going for a run.  Yeah, I get that too. 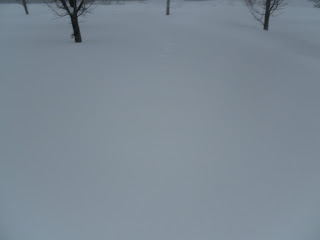 So I head out.  First problem was I couldn't find the driveway.  There was none. So I headed down where it should have been. To say the snow was deep is putting it mildly.  I was huffing and puffing going down the driveway. I get to the bottom of it and have to crawl over the mountain at the bottom to get to the road. I was not graceful at all.  So I get to the road which the plow has just gone by on and realize I don't have my Yak Trax.  How stupid was that?  I knew the roads were 100% covered with snow.  But there was no way I was going back up that driveway until I was done. So I headed off very slowly and quickly realized I was overdressed. I wasn't going to go on the main road but decided to.  Hubby had told not to wear my Ipad (yeah that says Ipad) because the snow would muffle sounds.  Well he was right about the snow and the sounds, he just had one vowel wrong.  So when I did hear vehicles (not that often) I would get way over on the side.  It wasn't too bad although I was as slow as a snail. It was the old soft sand running. (I say it wasn't that bad, my neighbor posted on FB that I was nuts as it was wild out there.  But another neighbor who was out shoveling clapped for me when I went by!)  I went slightly more than two miles and turned around.  Now I wasn't overdressed, the wind was whipping. I had not noticed it's benefits on the way up though. 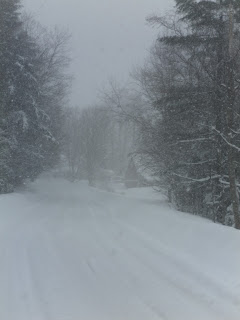 Looks like I am on a path of some sort,
not a main road 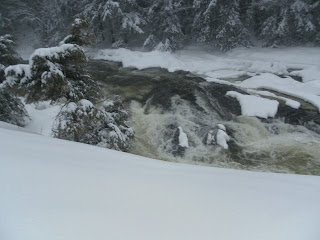 The ice just came out of the river,
on Saturday.  There is still
a lot in it. 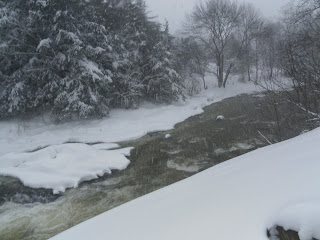 So I head back, still stepping out of the way of traffic, stopping to take the occasional picture.  When I get home I crawl back over the driveway mountain and as I climb up the driveway I fall down a couple of times. I had visions of myself unable to get out of the deep snow and freezing to death. Seriously, I was wishing I had my phone.  I seemed to have some vertigo doing this.  Maybe it was snow blindness!  Well, I got to the top finally after more huffing and puffing and came inside.  What a crazy run! 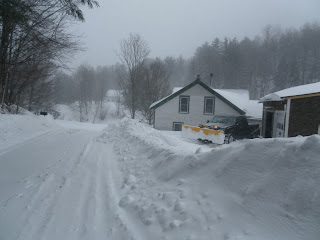 A neighbor trying to plow out of his driveway
to the road.  I don't know how well
the pictures show this but I wasn't sure he would make it.
A friend told me the truck couldn't do it at her house and
someone had to come with a bucket loader. 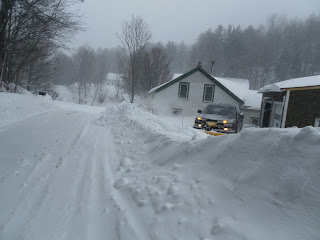 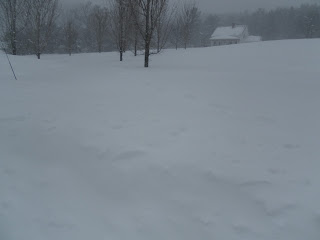 Time to trudge back up the driveway. 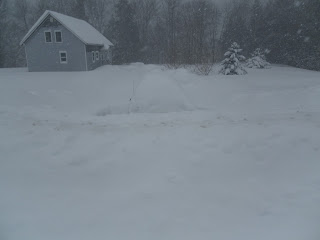 Yet another neighbor, can you see his car?  It is behind the
snowbank almost completely buried.
Now for our cars.  They are all now dug out
though. 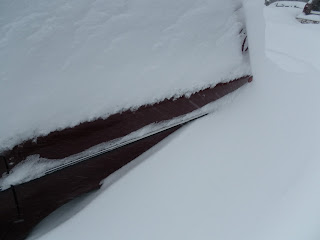 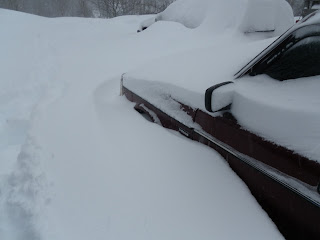 Later we went out to plow and dig the cars out. I wanted to be able to get to school tomorrow. Well, that is not happening but I am going to get out and run those errands I didn't do and I might even venture to Burlington. 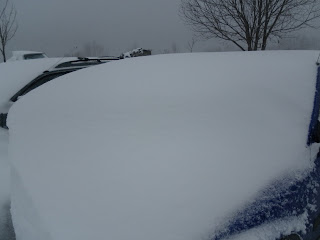 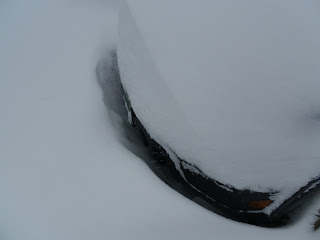 Everyone around here is posting snow pictures on Facebook.  One thread is about mail.  No one had it delivered today. My husband asked me if I got it when I went for my run. I told him there was no way it was being delivered today.  Love being right!
Oh yeah, the original 8 to 16.  We ended up with over 2 feet. The storm was supposed to end at 8 this morning. Try 6 tonight.  But now we're done. Right, Mother Nature?
Posted by ajh at 9:00 PM

Boy, you guys have really gotten pounded on this year!

Holy snow! Ca-razy about the vertigo. How did I not hear about this storm? Oh yeah I was dealing with scaly reptiles, wild dogs and the like.

CRAZY... I need to quit complaining about chilly weather, at least I have pavement.

So.....maybe I don't want to live in Vermont :) too much snow! Ha! Nice job on the run and good luck digging out of that one.

Oh, my gosh, that's a lot of snow. Wow! I love that you went out and run. I'm glad you didn't get stuck in a snowbank and freeze, proving all the doubters right.

I think you and I are quite possibly grave dangers to ourselves. :)

That's a LOT of snow! I think the Midwest is due for more this week, so I hope it dissipates before it hits your neck of the woods.

Andrea you're my hero! I can't believe you went out running with that amount of snow. I'm so impressed!

As the sun shines in through the window here, I can hardly believe what your place looks like! I hope that's the last storm you get... Great effort with the run though!

Wow! Your blog title should be 'Hardcore Runner - rain nor heat nor darkness nor 2 feet of snow will deter me from running'.

Awesome run - way to get out in the foul weather. Enjoy another day home with a hot cup of coffee. (That snow blindness does freak your equilibrium out after a while.) Have a great snow day!!!

Wow! Way to go out and get your run in even when you're buried in snow!
Your pictures make me so thankful we just got rain down here!!

You love this stuff! But I guess enough is enough and some springtime joy needs to come your way. Good job getting out there and keeping up with your running, all winter! Most people just run on the TM. Cheers!

I can't believe you went out there and ran! You are such a trooper! You definitely don't let much stop you from getting your runs in. Thanks for the inspiration :)
That is one crazy snowstorm...it was a snow day over here too yesterday, but not today.

How do you handle all that snow? Just looking at it makes me want to cry!

Good for you for getting out there! I would have wimped out. We got dumped on too, and are supposed to get more this weekend. Seriously, I feel like it's never going to end!

Pretty sure this one will go in the books as CRAZIEST RUN EVER! I can't believe you went out in that! Okay, maybe I can! Good job and glad you didn't get lost in the piles of snow!

Let's recall how much you LOVE the snow, that will help :).

So the comment I left on FB about how I wouldn't complain about the 4" we were to get....we got 1". So I REALLY won't complain...other than it's cold. But 65 by Thursday so all's good. Maybe you could move to Colorado :).

Okay, yes. Winter can be over for you now. I will allow that.

You are one crazy lady (that was supposed to be a compliment). Do weathermen in VT know spring is just around the corner?

Wow, sorry about the snow. We got rain over here, lots of it, but still, no snow! I would have gone for a run, too, so great job!

So isn't LOST addicting? I am close to finishing season 2. Where have I been when everyone was watching?

Here is to no more snow until next winter!

Oh wow. That is a lot of snow! It sounds like you had a running adventure. I'm surprised that you didn't pass anyone cross-country skiing.

OMG - you are mad! I can't believe you got out for a run in that - w/o your Yak trax even! Picturing you running with an Ipad was kind of funny, though!
Hope you guys get a thaw soon - you really need it!

You really did get dumped on. We ended up with a fair amount of ice under our snow (maybe 5" of snow). No one could go out on the ice though. I hope things are back to normal there, or at least drivable.

You are nuts!! Haha about your neighbor applauding. I'm glad you eventually made it back up the driveway and didn't get buried under the snow.

What a great running adventure! I Hope that winter can be over for you now!

Oh lord look at all of the snow! And I thought I had it bad in Chicago...