Cheetahs and Elephants and Pandas Oh My 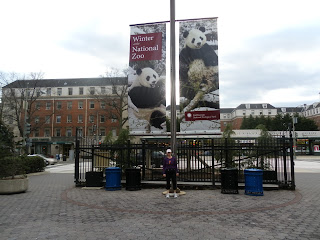 Winter in the National Zoo is looking
different than my winter 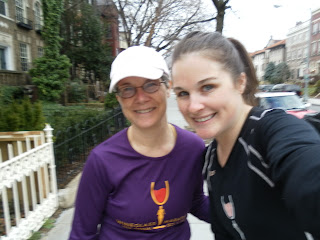 About to head out for our first run together
in DC 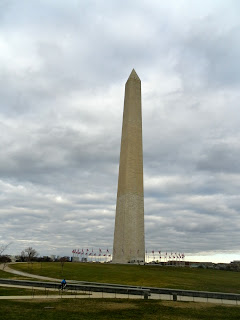 I arrived last night and met Emily at the New Zealand Embassy for a reception.  It was just a tad fancier than any reception they ever throw for teachers.  Wait, they don't throw receptions for teachers.

Today she went off the teach spinning bright and early this morning.  I was determined that I was going to tour the Bureau of Printing and Engraving. So I went to Starbucks where I had coffee and sat for awhile with my book, then jumped on the Metro and headed to the Mall.  I got a ticket no problem but there was an hour to kill and it was cold.  Nothing was open. I walked up the Washington Monument to kill some time, took a few pictures and headed back.  Now the building was open and it was warm. It wasn't time for my tour so out came my book.  I was happy.  Once the tour began it took about 45 minutes. I had been told this was the second most popular tour in DC.  Not in my opinion. It was fine but it is not one I will repeat. On a scale of 1-5 with 5 being the best, I would give it a 2.  When I left I thought I would go back to the Washington Monument just to see if I could get a ticket.  Score! I guess March is good time to visit. It wasn't until 11:30 so I had some time to kill. I went to the Freer and Sackler Galleries which I had been planning to do.  I have to say, it rated a 1.  Was I discouraged?  Heck, no.  Lots of choices left. I actually went to the Smithsonian Castle next which is an information center but had examples from all of the different museums. LOVED it.  They had a Nike license plate amongst many other cool things like warm, clean bathrooms, a place for a snack and a quick read.  Then  I headed back to the Monument, where it was freezing.  (When did I get so wimpy?)  They were running behind BUT a lady who had an extra 11:00 ticket gave it to me so I got right in.  Soon we were inside where it was warm and I read my book while I waited.  Do you see a theme here?  Maybe you wonder what I am reading.  The new Jodi Picoult book - Sing You Home which I am enjoying immensely and which Emily wants me to finish before I leave so I can leave it here.  Soon enough we were headed up the elevator.  I have never been up to the top of the Washington Monument. It wasn't sunny but you could see a long ways. It was fun picking out things in all directions. It wasn't that crowded and people were taking turns at the window. Life was good. 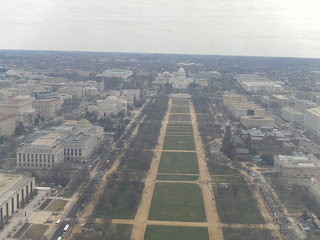 Looking at the Capitol from
the Monument 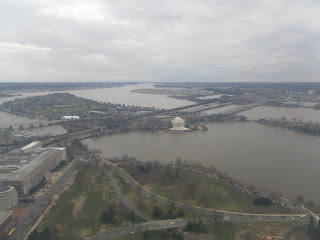 My favorite memorial, the Jefferson Memorial,
but what I also liked seeing was Haines Point,
behind it and to the left. You run there in the
MCM and Emily and I ran (she biked) there
last summer.  It is a pretty cool place.
When I came down I headed back to the museums and decided to go to the National Gallery of Art to make up for my earlier disappointment.  I went to two exhibits as it was getting close to time to meet Emily but they were great.  I went downstairs to the Impressionist Era and was in heaven.  I will go back another time. 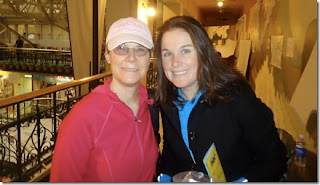 Once I met up with Emily we headed off toward downtown to pick up our race packets, eat lunch, head to Starbucks for the free petite snack and go home to change for a run!!!! 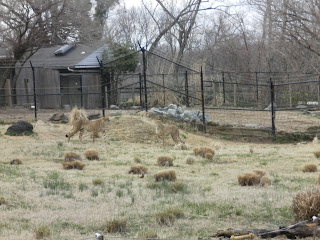 We headed off to the zoo to run.  There weren't a lot of animals out as it was cold (apparently I was not the only one thinking this) but we saw some favorite ones. I would have liked to see the new lion cubs but we were too late.  We did see the cheetahs, elephants, and panda. 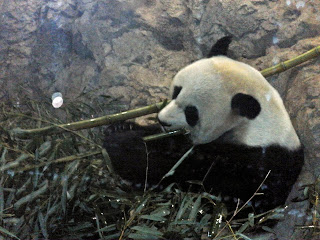 It is quite fun to run around a zoo. It is where Emily goes for her hill workouts.  She did a few while we were there. I did not join her.  I had so so so much fun running with her!  It is at the top of my list of what I have liked so far.  That scale of 1 - 5. It was a 5! 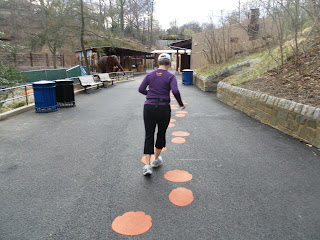 Following the elephant tracks to... 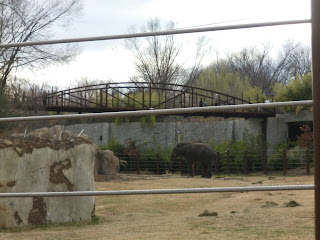 .... the elephant of course 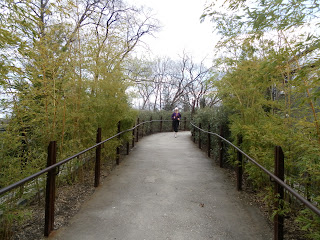 Just enjoying running in the zoo
Then we headed out to dinner to my favorite DC eatery where I had a banana and peanut butter panini.  Yeah, I have very refined taste buds.  Then we went to Target in a bit of a shadier section of town, but Emily protected me. I bought a new thingie to download my pictures and no matter what else I buy here it will be my favorite purchase. My camera has been a real bear when it comes to downloading pictures and this thingie downloaded at the speed of sound. 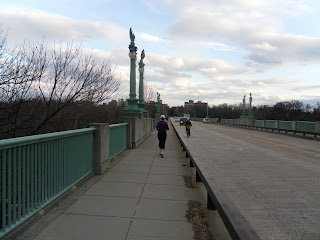 Running back to Em's house 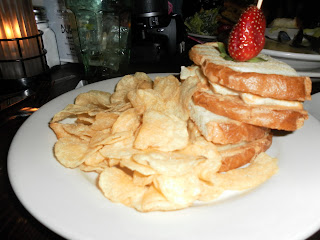 I'm so happy that you're having an awesome time. Enjoy the rest of your weekend!

You made it! And there's no snow and no heel pain - and you get to run in the zoo - how cool is that?
I am finally reading "House Rules" by JP, I was on the reserve list at the library forever...
Have a great race and enjoy the rest of your trip!

PANDAS! so much fun having you here!

ps-you're doing it again, and i'm not making it up

DC is one of my favorite cities. I am jealous! Looks like you are having a great time. Enjoy! Hope the rest of your weekend is just as fun.

What a wonderful day...that's pretty close to my perfect day...reading a good book, taking in some cool sights, running with daughter and picking up race packets...fantastic! :)
YAY for no heel pain...I am thrilled for you!

Sounds like a wonderful time. I love Washington,D.C. Of course, I've only been there once, when I was in 7th grade, but it was wonderful then. I do remember being excited to see the National Zoo and then thinking it wasn't nearly as nice as our St. Louis Zoo, though the pandas were a highlight.

I'll have to put that book on my "to read" list.

YAY! I am so glad that you made it to DC. Sounds like you are having a great time!

First of all-yay for no heel pain!! Second, you have just an awesome relationship with your daughter. I love it!! Third, I'm very jealous of no snow, and all your little sightseeing excursions! Enjoy the rest of your trip!!!!!

What a fantastic day you've had Andrea.

And running in the zoo: so great!

We have a zoo in the city 10 minutes from here and when that city had their first marathon ever 2 years ago part of the route went through the zoo.

It sounds like you are having a wonderful time with your daughter! Have a great rest of your vacation.

So glad you actually made it out there. I know the weather your way was not so good. Sounds like you are having a great time!

Yay, no snow! Enjoyed the pics! You ran at the zoo? Never thought of it! Fun! What a great day!

Just seeing the Panda made the day - everything else was icing ;-) Glad the weatherman "allowed" you out to visit Em - you two seem to have a great time together which is awesome!!! Enjoy the rest of your stay!

Good luck in your race tomorrow!
I have actually never been to the top of the washington monument. I run by it often but have yet to make the trek up. Someday. :)

It sounds like a great trip! I'd love to run through the zoo. Great idea! The views from the Washington Monument are amazing.

So glad you ran pain free! I guess I'm a dummy, but I didn't know you could go up in the Monument (kinda like the Arch at St. Louis) pretty cool!

I love the mother and daughter posts!

Cheetahs, elephants...for a moment I thought you were coming to visit me. Beautiful photos of DC! It is so great that your heel pain is something of the past.

I'm so glad that you enjoyed racing with your daughter today :)
Have a nice week!

that is def not the entry/gate to the zoo i stumbled upon haha.

glad you two had a good weekend!

ooo…I love pandas. Here I bought a cuddly panda bag (L) that I can hardly put it down! I believe it is a GREAT find for every panda fanatic! http://hkpanda.freetzi.com/