Am I supposed to get in the snowbank/TTT

Three Things Thursday
OR
Am I supposed to get in the snowbank? 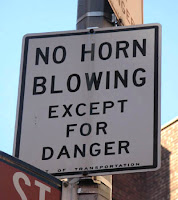 1. Today I was running on my usual route when a van waited until it was beside me and laid on the horn startling me, making me jump and giving me a heart attack.  I assume they thought I was in the way.  Well, I was on the side of the road, the "shoulder" was filled with snow and there was NO CAR COMING IN THE OTHER DIRECTION so there was plenty of room for this van and myself. The car directly in front of the van had no problem. The other 41 (yes, I counted) cars I met had no problem. If he truly wanted me to move he could have given a slight honk BEFORE he was beside me but no he wanted to go for the nasty approach!

2. I had a decent 5 mile run today except it was raining. Yesterday we had this beautiful snow and I stayed in because my body really needed a day off. Today I go thinking it will still be beautiful but the snow was already ugly and it was raining.  It wasn't cold though and the roads were clear.

3. Today I had lunch with two former colleagues.  I don't see these two wonderful friends as often as I would like but I am glad we haven't lost touch.  One woman left to pursue a new career which she has been very successful at. The other woman retired. She and her husband have done retirement the way I think it should be done. They have done a ton of traveling with lots of wonderful adventures.  Back in the day when I was 50 pounds heavier and pretty much a slug I admired C for her dedication to her running and fitness routine.  (But I only admired it with no attempt to follow it. )  She has stayed fit and is way more adventurous than I!  If I can do half as much when I retire I will be thrilled!
Posted by ajh at 9:10 PM

No you are not supposed to jump into the snow bank!!! I hate it when cars honk at me and scare the cap out of me!! They do it to bug us because they just don't understand!! I could go on and on about this one:)

Good job on your run!! How wonderful that you were able to meet a couple of good friends for lunch! It must of been so fun just to sit chatting and playing catch up on stuff:) Happy Thursday!!

What a jerk...I can imagine how your heart must have been pounding when he honked his horn at you. Ahh, maybe he was having a bad day. There's this thing called karma... :)

I better not start complaining about drivers who won't share the great big road with just me way over on the other side of the road. That horn picture you used - perfect!

I can not stand drivers who honk. Or ones that won't move into the other lane. Or men who yell things out their windows ... ok, maybe I just need to run where there are no cars ...

ugh, nothing like breaking your concentration on a run with a honk!

I just showed my husband the photo of your lobster roll from your race recap. Now I'm wiping his drool.

There is something that happens to some people when they get into those cages with wheels (cars, that is). It is like they become animals. Have you ever heard of pedestrian rage?
In the book 10 Million Steps a guy who at age of 73 ran across America in 124 days often mentions drivers like the one you just encountered. The guy was a jerk and I am glad you are OK.
Hey, at least you had a good time with your friends.

Do people even realize that they FREAK out runners? Makes me sooo mad..

FYI I may just do the alphabet backward or think of another creative way to post. So stay tuned..

Don't you just meet the jerkest people sometimes?? Probably just jealous you were out there running and he wasn't. Or couldn't. Or didn't know how. RUDE! That's great you still get to occasionally meet up with your old friends - those are the best!!

I'm so glad you caught up with old friends, there's nothing better than that! Stay warm this weekend!

Hopefully your get together erased any negativity from the a$$ on the road.

I also want to get to retirement with energy and vigor to enjoy all that life has to offer.

Retirement? What does that word mean? LOL! Glad you got to meet up with some old friends!
And that guy was a jerk - I could really rant about this, as it happens in my neck of the woods all the time and we don't even have snowbanks! Where there is enough room in the other lane to go around the runner safely - do it! Jeesh!
Happy Friday!

drivers are dumb! F that! I think you are pretty amazing for al your running that you do now! I hope I can still be rocking it after I have children :D

The people in the van were most likely overweight and inactive.

We had the same weather. Beautiful snow on Wed. Rain all day Thursday. Today is a mix but a lot warmer. I admire you running outdoors.

Grrr on the rude driver! I've had them swerve at me when I was in the bike lane and point at the sidewalk on the other side of the road. Craziness abound, it seems!

Yay for meeting up with old friends!