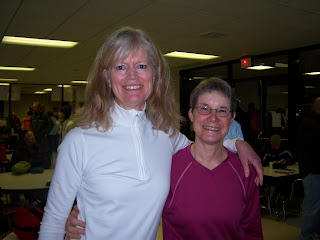 Before the race
A year ago January I raced in the Inaugural 5K in Durham, NH. It was easily the coldest day I had ever raced. Well no more!  I don't know what the temperature or the wind chill was but it was FREEZING today in Lake George.  Just stepping out of the car at the elementary school was enough to take your breath away.  But that was nothing compared to running alongside the lake with the wind whipping across the lake to push against you no matter which direction you were running in.  I was very proud of both myself and my friend who braved the elements and ran in spite of the cold.

My friend had come along to cheer me on although I had asked her if she wanted to race.  Much to my surprise she decided to race in spite of the fact that she hadn't been running in awhile.  She weighed the pros and cons and despite a lot of hesitation went ahead and registered.  Many people would have stayed behind in the warm elementary school. I was very proud that she bit the bullet and ran! Of course then there was all the usual agonizing over what to wear. If you didn't have to go outside and STAND THERE waiting for the race to start it would be fine.  I ended up with one layer of pants, long sleeve shirt, vest and hoodie.  I wore a headband, thin gloves and turtle fur.  I did end up with the hood up the whole way even though the wind in the hood probably slowed me down a great deal. (ha ha)  Overall the right clothing decision. 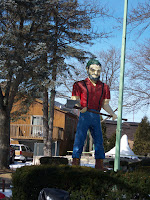 After a short freezing wait the race began.  I took off feeling like I was doing very well.  I came to the first mile marker and my time was 9:13. WHAT???? I was not happy.  Usually my first mile is my fastest.  I am happy if my pace is anywhere in the 8s.  This was not going to get me there.  So I picked up my pace which was helped by a short downhill but not helped by now being on the lake in the wind. We headed past Paul Bunyan who was cheering us on 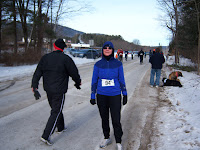 and I hit mile 2 with a pace of 8:43. Better.  Again a downhill which I used to quicken my pace and we turned a corner and headed back to the lake and more wind.  I kept thinking, this is just 4 miles, you will be done soon.  We get to the end of the lake and start heading UP for the longest hill in the race.  When I reached mile 3 my pace was 9:01.  As you can see there was no guarantee I would be under 36 minutes which is what I was striving for.  I had a little more of an uphill and then it was downhill with a long flat finish.  I had been passing many more people than were passing me so I felt good about that.  Once I got to the flat part I remembered that last year it was much longer than  I thought so I was mentally prepared for that. I passed a woman in a purplish hoodie and stayed ahead of her for quite awhile.  After we turned the final corner she passed me going quite a bit faster than she had been going.  I reminded myself that I should have some left as I started out slower than usual.  I didn't think I could pass her again but knew just attempting it would better my time.  I didn't pass her but it gave me the last minute surge I needed.  I crossed the finish line in 35:49 with a pace of 8:57. It is amazing how much happier I am with that than 9:01.  As soon as the woman in the purple hoodie and I got through the chute we turned to each other and said together, "You were a great inspiration to keep up with!"  I love runners!

Then I waited for my friend to finish, no longer feeling the cold as much in my exhilaration!  Racing always leaves me high for hours!  She was thrilled at finishing and running the whole way.  We went inside, changed and waited for awards.  I placed 2nd in my age group!  I got a pin.  I have placed here each year I did it. One year it was a medal.  Last year a trophy. This year a pin. I must say I am a sucker for the hardware.  No big deal though. 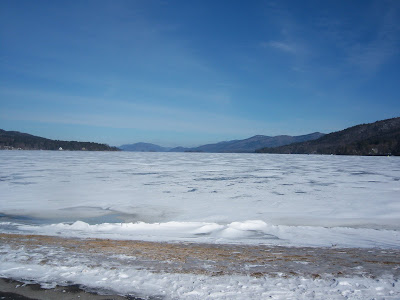 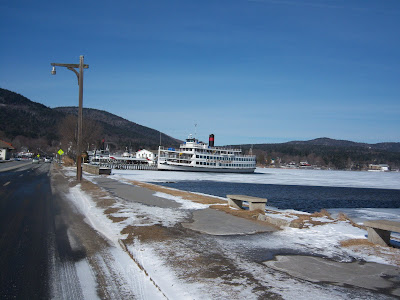 Lake George in all it's winter glory! 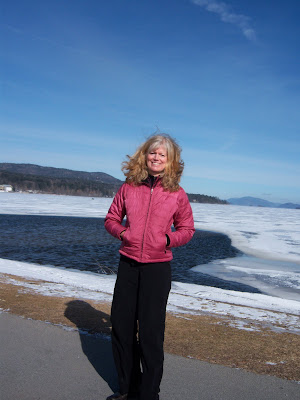 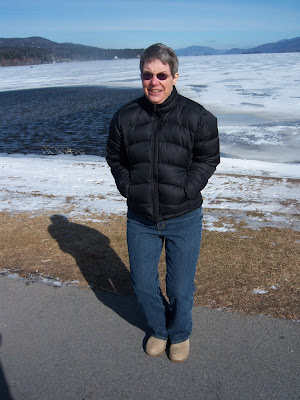 Then we headed out to shop.  I'll save that for another post!  These photos are after the race. We are trying to look cold.  I think we succeeded.  Tomorrow I am scheduled to run 12. I am okay with that but I so need it not to be freezing. I have been a good sport but enough already! 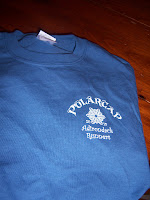 This is the shirt. It is fine, nothing special but I
at least got a small. 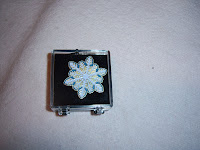 Wow congrats! I love that you got your goal. I agree!! I am always happier when my training runs are in the 8's instead of the 9's. I cannot believe that you were freezing and we had 60 degree weather today :)

Hey, way to finish strong and fast!! Congrats you did awesome in the cold weather:) Great recap and I love the pictures. Have a great run tomorow:)

You and your daughter have this thing for running is cold temperatures/crazy weather conditions! Great job on the grace and beating the 36 time mark!It looks so cold out! The wind was probably a killer too!

Yay!!!! Congrats on your time! What a great pace. I'm so happy for you.

It was 23 degrees when I started my 14 miler today. I thought I would die due to the cold. LOL. You would have thought it was a heat wave!

And to think I am complaining when temps are in low 40's. Great race. Congrats on a strong finish.

I don't know how you guys run in such cold weather. Makes me glad I live in CA.

Congrats on 2nd place and winning a neat pin! You and the other runner helping each other to run fast - super!

Congratulations to both of you for braving the cold! I don't thinkit got above 15 degrees yesterday! And you are running again today???? You must have to have a whole shelf system for all the hard ware that you are accumulating! Anyway congratulations...and let's plan a get to gether on your vacation!

Way to finish strong! Congrats on the cool pin! I am a sucker for t-shirts, so I LOVE the shirt! And, it looks so cold!

Great job on your pace!
Congratulations on placing, the pin is very pretty...and woman, you are a polar bear :)
I thinks it's really cool that your friend decided to go ahead...kudos to her!

I looks so cold out there... but at least you did have 3 feet of snow like I got. How to your run 6 miles when you have to move your legs like you are running hurdles for each stride.

ANDREA - - it's almost that cold in FL!!! I've been walking/jogging on the boardwalk right by Alice's condo. . . lots of dophins playing! That's fun..... congrats on your race.
We head home tomorrow...hope to miss the snow messes on our way north

BTW, this has nothing to do with this post, but about Chibougamou :)...I used to do assessments in the Québec North and one of the towns I worked in was Waswanippi (if I remember well, we used to land in Chibougamou) :) ...I also worked in Waskaganish...and many others farther out. I've been meaning to mention that! So cool that you lived there...

Rock on! I got a little chilly just reading your post.

Way to go! I hope it is a little warmer for you today...but given our weather I don't think the weather is cooperating.

Congratulations! I love the pin. It'll remind you of the cold!

Congratulations! Way to go on the small shirt! I will get there soon enough :-)

Congrats! You did awesome. The races I've done only have a prize for first (plus my age is a 20 yr age group and I'm at the far end of it - pooey). That pin is cute.

And yeah, our weather is just a tad nicer out here this year. Last year we were blanketed in snow, this year the tulips are starting to break thru.