Is there such a thing as too much chocolate? 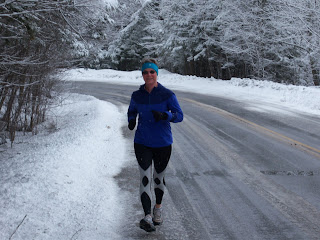 Trying out my new compression tights - Loved them! 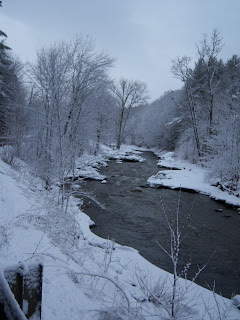 We had a great 8 mile run this morning. With the recent snow we were back to a picturesque snow covered route.  The temperature was reasonable and T was running with me.  As we ran we discussed the possibility of entering the Seattle Marathon.  It's kind of a 50/50 deal right now with work being in the way for T.  I would love to do it as the time works out supremely well for me.  I also gave T a recap of the half marathon I ran last weekend. She is always a great audience for as many race details as I want to give her.  Her son is down visiting my daughter in DC so we spent some time speculating what they had on tap for today. 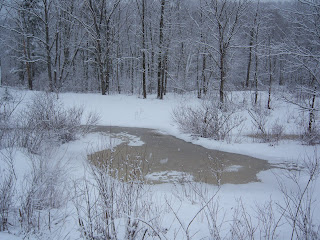 Temperatures are warming up but the river continues to look cold! 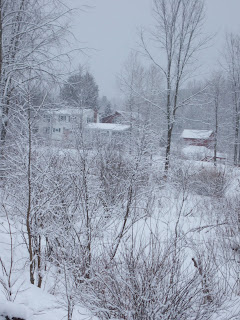 This afternoon my husband and myself as well as two friends headed up to Burlington's Mardi Gras parade. There have been many years where I have FROZEN at this.  No worries this year, the temperature was almost balmy!  It is always a great parade. I tried to take some pictures but I mostly got arms reaching for the many things being thrown from the floats. I saw one of my students there who was busy collecting his own beads. 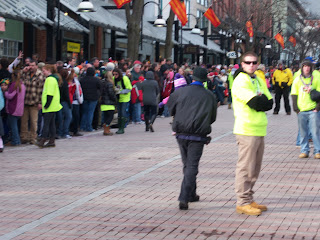 Waiting for the parade to start 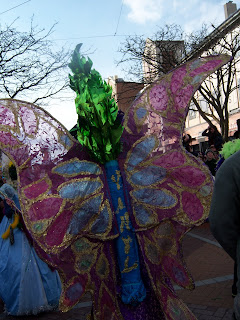 The owner of Magic Hat Brewery Who Sponsors the Parade 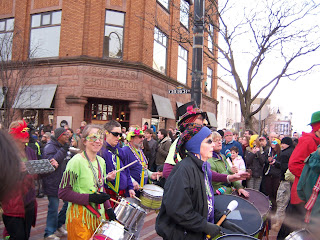 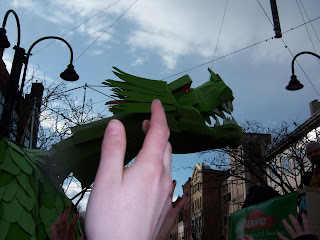 Most of my pictures of the floats look like this, arms reaching for the multitude of stuff being thrown 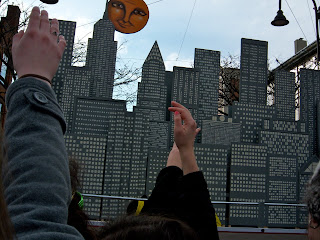 Okay I'm finally getting to the chocolate referred to in the title! We left there and went to a local restaurant. We sat at the bar sporting our many colorful Mardi Gras beads.  We chatted and enjoyed wine/beer before we all ordered burgers.  That should have been enough but I looked over the dessert menu. I found out it was Chocolate Fest which meant there were many chocolate offerings and you could have as many as you wanted.  Thankfully my friend's husband decided to partake with me so I didn't look like a total hog alone.  All I can say is YUM!  How could anyone resist!!!
A fun day overall.
Posted by ajh at 9:05 PM

I love Mardi Gras parades. Even cooler that it's sponsored by Magic Hat. And, no, there is no such thing as too much chocolate.

That sounds like a fun parade. By the way, I love your compression tights. I have some and once I put them on, I don't want to take them off. Too much chocolate?? What a funny question!

Too much chocolate? That is just impossible - there could never, ever be too much of it. (Guess why I don't keep any in my house)
I love the contrast in those two sets of pictures, the almost black and white snowscapes and then colorful Mardi Gras ones.
Really cool tights!

Great pictures...they are very pretty:) Good job on the eight miler! The parade looks like fun! Oh, I love chocolate and you could of for sure talked me into the dessert:) I like the tights too, they are very flattering and make you look like lean & fierce running machine!! I hope that you enjoy the rest of your weekend:)

chocolate.... sign me up! no you can never have too much :) parade looks like a fun time and i love the snowy run pics!

I used to not care for chocolate and then I got pregnant with my first baby boy and now I love it. What Seattle Marathon are you thinking of doing? Seattle or Rock-n-Roll? Would be fun if you came out here.

Love all the pictures!

Ah I love the look of the tight! So BA! You look awesome - so tough and hardcore! How fun that you all have a Mardi Gras parade. I'm sure NYC goes - although i've never heard of one. And no, no you can never, ever have too much chocolate. If you ever feel like you have to much, please FedEx all remaining chocolate to me.
PS - I have no idea how to do a give away either. Its the "thing to do" so I've been considering doing one. If I do, i'll let you know how it goes!

oh chocolate, did you say you could have as many as you wanted?!....I love the dark, good for you chocolate, but I'm just as happy with a snickers bar.

Rookie on the Run said...

No. There is no such thing as too much chocolate. Beautiful pictures of the snow! Cold but beautiful. :)

According to my daughter, one can never have too much chocolate.

Lovely pictures! I crave chocolate from time to time and always listen to my body give it what it wants. Runners can never have too much chocolate.

No, you can never have too much chocolate. It's always the first thing I go for when my kids are stressing me!

Love the icy pics but glad to hear it was balmy at the parade! You are cute in compression--I love them! And yes never too much chocolate. I'd have been a total 'hog' right with you!

Your running location looks beautiful! Those hills and streams covered in snow look like something from a postcard. I am so excited for spring to finally get here. I'm sick of looking at snow.

You can NEVER have too much chocolate. Ever. Those running tights make you look super fast!

Great snow pics! VT looks so nice. There is no such thing as too much chocolate!

I'm pretty sure you can never have too much chocolate. :)

I know i've told you before, but you run in a beautiful area. I'm sure you're tired of the snow, and living in Texas, we NEVER see that type of weather.

No such thing as too much chocolate!

You really can't turn down a chocolate crap festival like that! Especially when you were out celebrating mardi gras with friends! Sounds like you had a great time.

I like your new compression tights; I just bought some Zoot compression socks. I hope I like them!

Like the new header! Those tights make your legs look so skinny!

Definitely cannot have too much chocolate - ever! How do those tights work - do your legs feel less tired or painful when using them?

You'll need to do a review on those tights. They look very interesting. Though (please don't shoot me) it's too hot for me to wear long pants running here right now - heehee.

My hubby is the beer drinker in the family wonder if he's heard of magic hat?!?! Wonder how far it is from where we are vacationing in Maine--bet if it's close he'll want to make a stop? sorry, lots of thinking out loud there.

Love the compression tights---I really think mine help speed up my recovery time.

That run looks so scenic! Hard for me to imagine running in that, though :)

I am so much more a vanilla person, than chocolate...which I know is odd! When I eat chocolate, I prefer dark. Dove dark chocolates with carmel...CRACK!

Great pictures! You know how I feel about chocolate, you can never have enough!