What was your most meaningful race? Here's mine -a very special one. 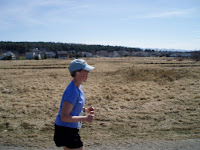 This post was inspired by ESH at Sweat Once a Day who wrote such a wonderful post about me. It got me thinking about my own mother who may not have inspired me as a runner but certainly was an inspiration in many ways. It was also inspired by Christina at Lazy Bones Running who is posting an intriguing question each week. It made me think of a question I would like to blog about and to invite others to do the same.

What is the most meaningful race you have run? It could have been meaningful for a variety of reasons: your first marathon, running for a charity to raise money for a special cause, running with a friend or family member, running in memory of a loved one.
The last reason is the reason for my most meaningful race. My mother died when she was 53 when I was just finishing my first year of college. It left a huge hole in my life which continues to this day. I wanted to do something special in her memory when I was 53. The marathon that I was planning to run that year was past my birthday so I would be 54. I decided to focus on a half marathon that I was already running in the spring.
Once I decided to do this my brain went into overdrive with many ideas. I wanted to raise money in her memory but I wasn't sure how. I decided to just ask colleagues at work and friends. My goal was to get 53 people to donate. I came up with a short note that explained what I was doing and why and passed it out. I didn't know who to ask at work and didn't want to leave people out so I asked everyone hopefully making it clear any amount or nothing was acceptable. I thought maybe I would raise $100.00.
The response was incredible. Many people donated various amounts to my race. Several people asked me to run in their mothers' memories also. I was touched by the number of people who gave me $53.00 realizing the significance of that amount. I had told people I was going to donate the money to St. Judes Children's Research Hospital which was a favorite of my mother. She was also a teacher (like I am) so donations benefiting children were very appropriate. Sixty-four people ended up contributing to this cause. I raised $1415..00, far beyond my wildest dreams. 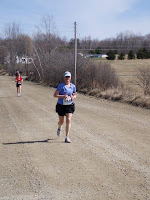 The race itself was fantastic. Each time I reached a mile marker, I thought there is another $100.00 for the cause. I had prepared a play list I was listening to. I played songs from each decade my mother was alive. I listened to Dixie Chicks in between each decade to easily separate the decades and because they are just plain fun to run to. Ready to Run was my starting song. I listened to songs from Swanee (Al Jolson - 1920s to Fire and Rain - James Taylor , 1970s.) I included some Frank Sinatra to honor my father too. I was just past the last decade when I crossed the finish line. My cousin had sent me a St. Jude medal which I kept in a pocket and fingered from time to time.
The weather was also great. I had a time goal of a pace of 9:30 a mile but this was a hilly course and I didn't know if I could do it. I had told my daughter to meet me at mile 11 because she wanted to run the last two miles with me. But I was ahead of my pace and had only a mile and a half to go when she met me. It meant a lot to me to be running part of this race for my mother with my own daughter. I really worked the last few miles still hoping I could meet my goal but I didn't think I had. Much to my delight and surprise my pace was 9:28 a mile. It was a good ending to a very special race. 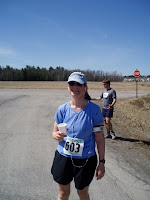 Wow, this is such a great story. Meaningful is probably the best way to describe it. I hope I can do a meaningful run as well some day. I have some plans and you just gave me some ideas and motivation. Thanks for sharing this!

Wonderful story. Loosing a young parent is hard and you honored your mother with your race. I love how people donated $53!

To answer your other question, the HEED giveaway isn't my first. My sister-in-law works for Hammer Nutrition and when she had her baby she used her monthly product allowance and sent me a few things to try and give away.

What a special way to honor your mom!

What a beautiful and touching story...thank you for sharing. I am inspired!

Wow. That is beyond amazing. That was such a wonderful idea. Very very awesome

That is such a great story! Thanks for sharing :-)

What a touching story and an amazing way to honor your mother. I love the idea to have a song from each decade your mother was alive. That is very special.
My most meaningful race was the last Half that I ran in Az. Though I didn't perform as well as I had hoped, I got to run with my big brother. It was his first race and was a wonderful bonding experience for both of us.

What a wonderful story!

What a great, touching story.

I lost my dad when I was 13 and know all too well about the hole it leaves.

Thanks for sharing such a great story!

That was so thoughtful and touching, it made my day. Again, I see why your daughter is so wonderful!

What an inspiring story! I am so thankful that my mother is still with me; what a great way to honor your mother.

Wow what a story.

I lost both of my grandmothers within weeks of each other right before my first marathon---I definitely thought of them during that race.

I really love that you remember so many details from this race. Proves how special it must have been for you. I think there is no better way to honor those we love. Thanks for sharing.

BTW, it's cold there! Wow! I'm so impressed that you are still getting out on the roads!

Great story. You're my inspiration - keep it up!

Hi there,
New follower here. I discovered your blog from Robin at Running Circles Around the Turtles. I'm an older runner too (41), so I enjoy finding blogs of other runners who are "older" too :)

Beautiful story about your most meaningful race. Yo've got quite the list of accomplishments from last year. Nice job.