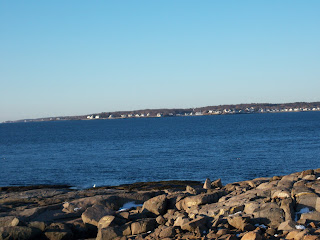 Generally following a half marathon or marathon I take some time off to allow my body time to recover.  But after Sunday's fun fun fun half marathon, I have not yet stopped running. I was in Maine on the ocean and could not resist running in one of  my favorite places.  Last week ESH at Sweat Once a Day asked what our favorite running routes were. I added running on the ocean as a distant fourth but that is only because I get to do it so seldom.  Running in York up to the Nubble Point Lighthouse is right at the top for me.  It totally rocked this year because I got to run it on a clear sunny day which was beautiful and then on a cloudy stormy day which is how I truly love the Maine ocean!  I ran slowly and smart so as to not strain my muscles and pretended it was recovery. Truly though I had a couple issues before my race (hip flexor and piriformis) and they both feel much better now!  Let's hope they stay that way!

Much of my running route in York follows the route of my last half marathon All Women and One Lucky Guy.  If you haven't run this race, think about it!  Crush Til It Hurts, you want to meet some running ladies, here is an opportunity for you! 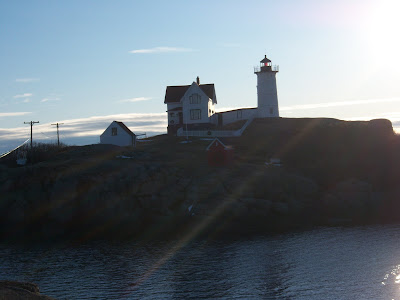 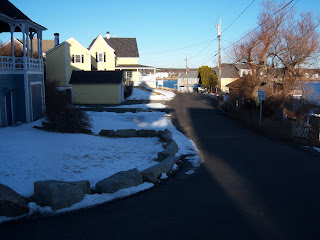 Monday I left my hotel (off in the distance in the picture on the top left) and ran along Long Sands before heading up to Nubble Point Lighthouse.  I love going up toward the lighthouse looking past the houses on the cliffs to the ocean beyond.  My entire run was only about 4 1/2 miles so I don't think I did too much damage to my recovering muscles.  This picture to the left is headed back down on the other side to Short Sands. 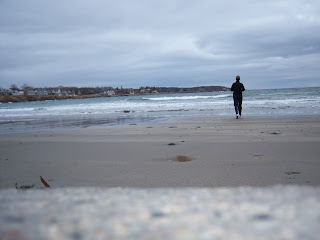 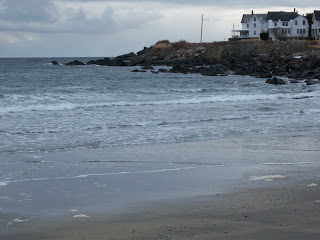 Tuesday (today)  I was up bright and early again but I could see rain on the window.  It only rained for about 3 minutes but it certainly felt like it was going to storm later in the day.  The sky was much grayer as was the water.  When I got to Short Sands today I started playing
with my self timer. I am NOT headed into the water, just away
from the camera not always timing things the way I mean to.
I fooled around with it again at the lighthouse having trouble
finding a rock to balance the camera on and figuring out how to keep the ugly electrical wires out of the picture.  Lame lame photo but I was having fun! When I headed back to the hotel I went down onto the sand to run.  It was pretty wonderful. I guess I will take tomorrow off not that I am back home but it is snowing hard out and I do love to run in the snow when it is light and fresh! 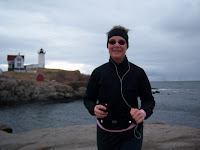 Lovely. I really enjoyed running in Maine when I was up there this summer.

It looks beyond pretty! So jealous that you got to run on such a great location. I love your self timer shots!

Oh my goodness, I wish I could of been on the run with you!! Those pictures are beautiful:) Thanks for sharing them...it makes me want the snow to go away ASAP!! Way to get out there for a few miles so fast after your half:)

After 13 years of living in CA I still cannot decide if I like it better than New England. I truly think those are just amazing places to live in. Great pictures.

Very cool pics and I love that you used the self timer... great idea.

I'll be in Maui in June and I am planning on some sunrise runs along the beach front with my daughter. Can't wait for that.

The pictures are just gorgeous. I've never been to Maine but I'd love to visit one day. It looks like you had some nice runs!

Great runs in beautiful surroundings. Thanks for sharing. Lovely pictures as well.

Wow, those pictures are awesome. I will have to run in Maine before I move on.

Beautiful! I want to visit that place and experience that run for myself. Thanks so much for sharing.

Love the pics! What a beautiful February day. So Jealous!

I am so jealous... what an awesome run.

Those are beautiful pictures! What great runs...I love the ocean :)

Oh my goodness! That looks absolutely gorgeous! My husband and I might be relocated in that direction and now it makes me want to go more :-)

I used to vacation in Maine in the Summer when I was a kid. So beautiful. Great pictures!

It sounds like you're on a continuous running high! Gorgeous photos!

wow, looks like a great place to run!! Great Pictures

Wow, just awesome. I have never been to Maine and now I want to go! I am only a short drive away from Santa Cruz here in California but I don't go nearly enough!
And I wouldn't have been able to pass up running in that beautiful scenery either! Especially when you have so much snow to go home to! Enjoy your trip :)

Cool pictures. The view is so picturesque!

OMG!! I can't believe how GORGEOUS it is up there!! Consider yourself very lucky to get to run with such beautiful scenery.

There is special place in my heart for Maine. That's where I got engaged in 2005. It's beautiful there.

Actually, not sure where you are in Vermont but my husbands family is going to Maine for a week this summer---maybe we could do a meetup?!?!

I've never been to Maine. Thanks for sharing the great photos!

I have always had a secret love affair with Maine ... although I occasionally cheat with Louisiana ;) hehe

Gorgeous!! I have never been to Maine but it's high on my list of those places I want to go to! You're very blessed :).

Email me at: ambitiousalisa@gmail.com and i'll send you the specs of the trip. Would be super fun if you're going to be around.

How gorgeous! What a great run! Maine is on my list of places on want to visit. I have never been to the Northeast before.

The farthest east I've been is Utah (ya, not far). But it's definitely on my to-do list to the see the east coast.

So jealous that you got to run on such a great location. I love your self timer shots!

I'm catching up on all of your posts. First off, congrats on your race! 2:05 is a great time!

Second-Congrats on all of your awards! I too love popcorn w/ parmesean cheese. Yummmm. Although I don't eat it for Friday night dinner! :)

Third-I love all of your pics of Maine. I have never been. My mother has always wanted to live there and I've always heard how beautiful it is. Perhaps someday I will visit.

i have never been to maine but it looks beautiful! love the pics and action shots of you running :) i always wish i had cool, artsy, scenic pics of me while running.