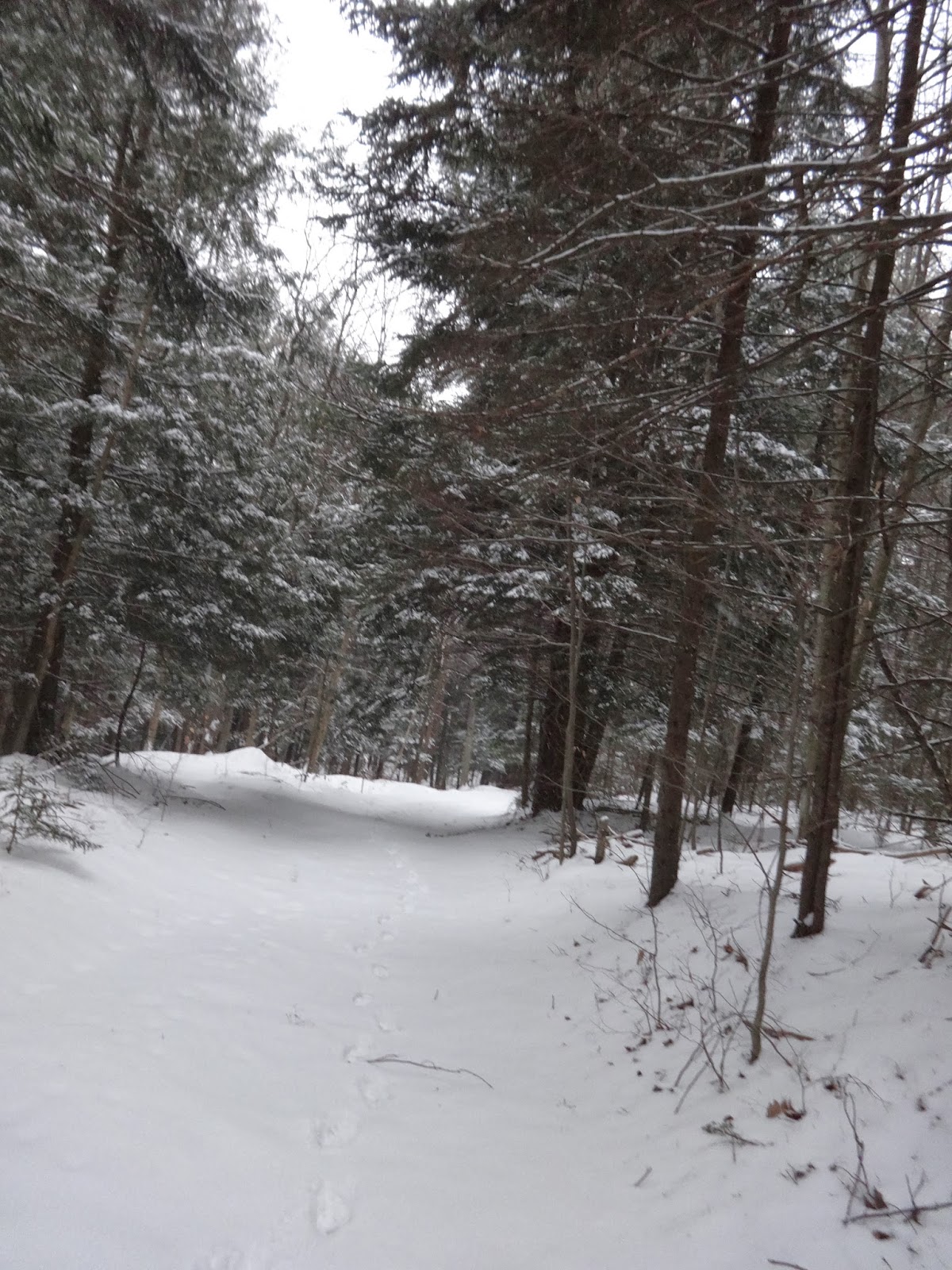 It's actually snowing on this snow day.  Not enough in my opinion but better than nothing. So far I have gone to the gym and done my pace run. I'm hoping to get outside too but I want it to be snowing more.  My pace run was great. So so much easier to do it in the morning before I'm tired from work.  Monday and Tuesday I was beat after school but I got the runs in. Today was going to be swimming but running worked better with the day off. 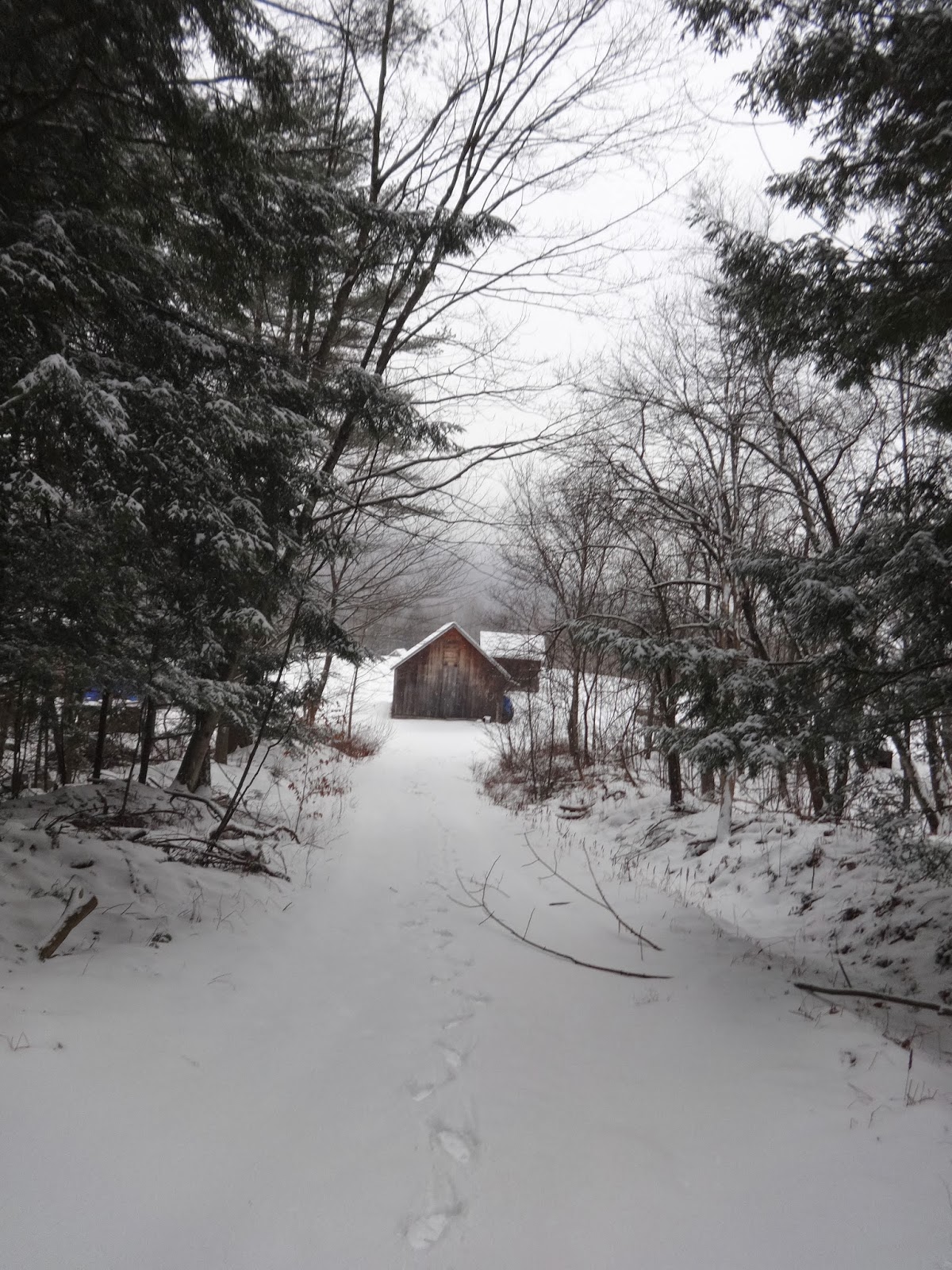 I can't remember if I have mentioned I am now registered for two half marathons - both on the ocean- both new to me.  The second one is in NH in a gorgeous spot.  I was considering it with a friend and I hemmed and hawed because of timing. I finally decided to go for it, it looked too good to pass up. I had no idea how popular this was or the race capacity or anything. The day after I registered it closed.  My luck doesn't usually go that way.  I'm glad I stopped procrastinating. 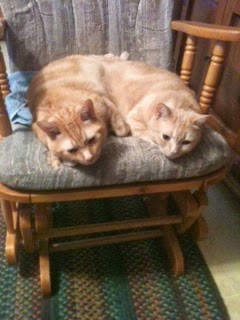 We got a new cat.  It looks just like our cat we lost.  It has no name yet - it's a bit more my husband's deal than mine.  Rocco (on the left)  developed a UTI which he gets at times - possibly from stress.  He can't pee or he pees blood.  He squats and nothing happens.  So Saturday after getting back from the race we went to the emergency vet - ca ching.  Not much they could do.  Rocco is isolated in the mud room with food, a litter box, sleeping spots but I am feeling badly for him.  It seems less stressful away from "New Guy" and he isn't peeing on everything in sight.  We must love our pets with what we put up with.  I go out and sit with him so he has company.  His sister is out there with him now but they're not all snuggly like they usually are.  He's improving but not fast enough. 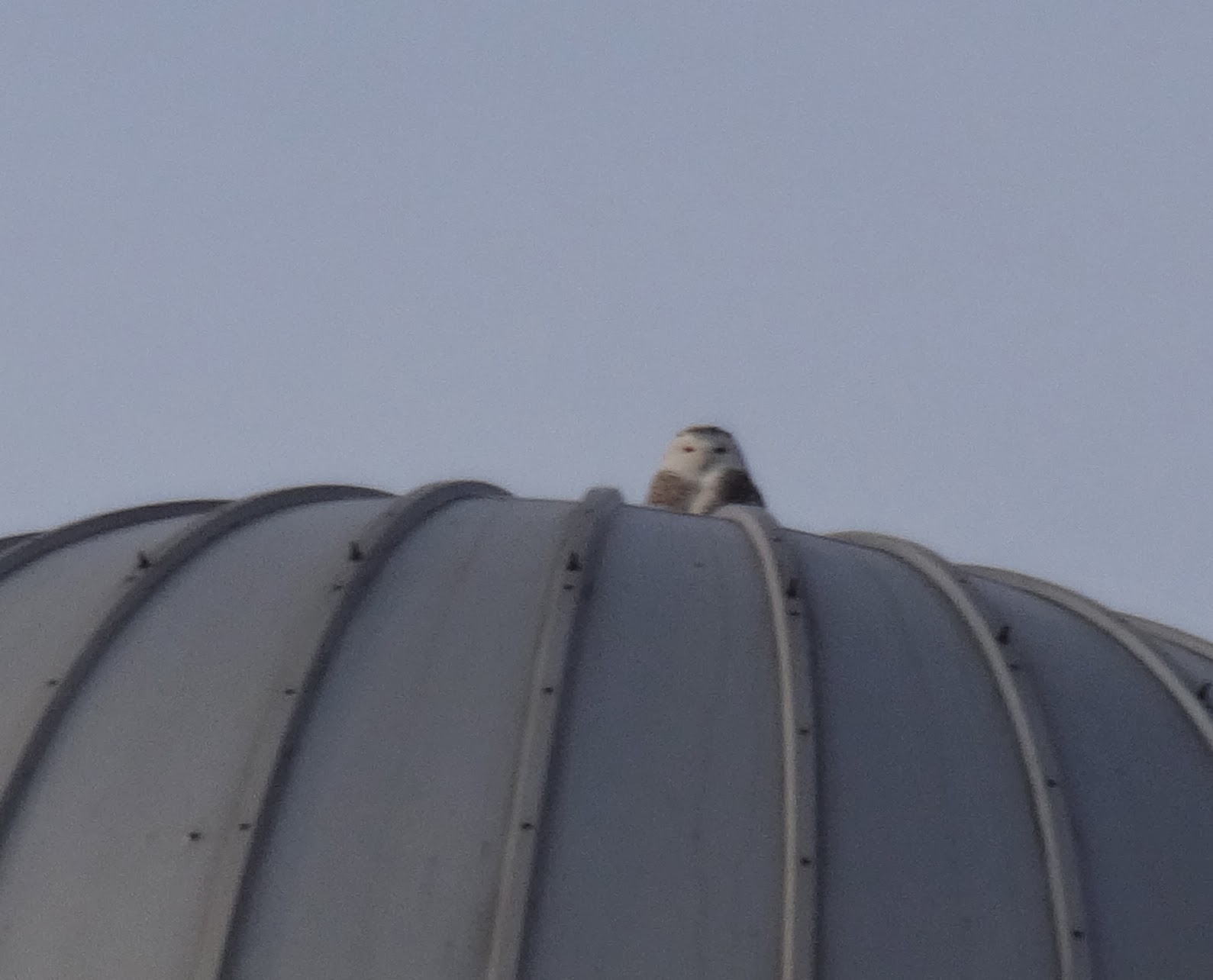 The one on the silo - huge huge eyes 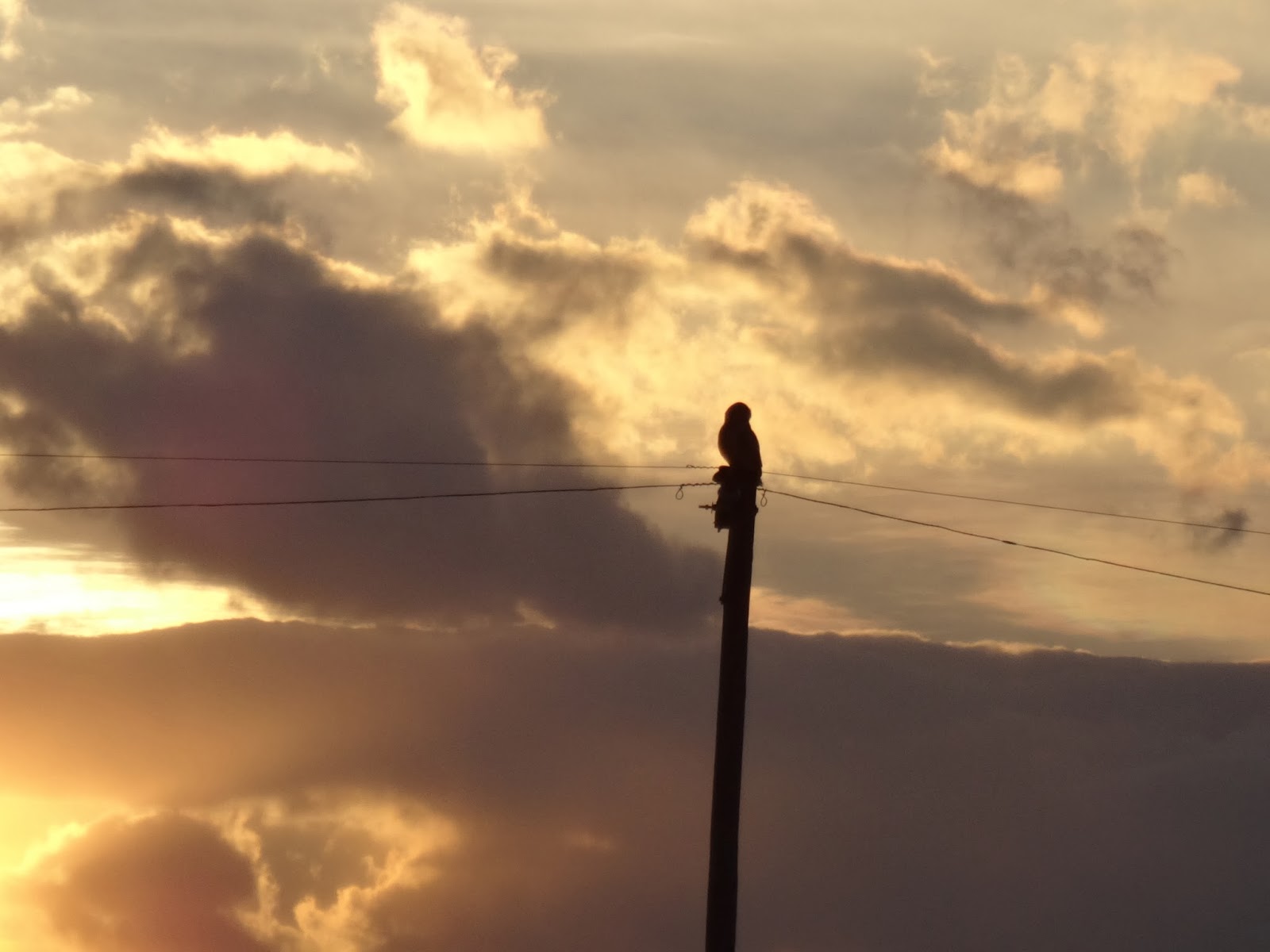 This is when we first saw the guy on the pole. 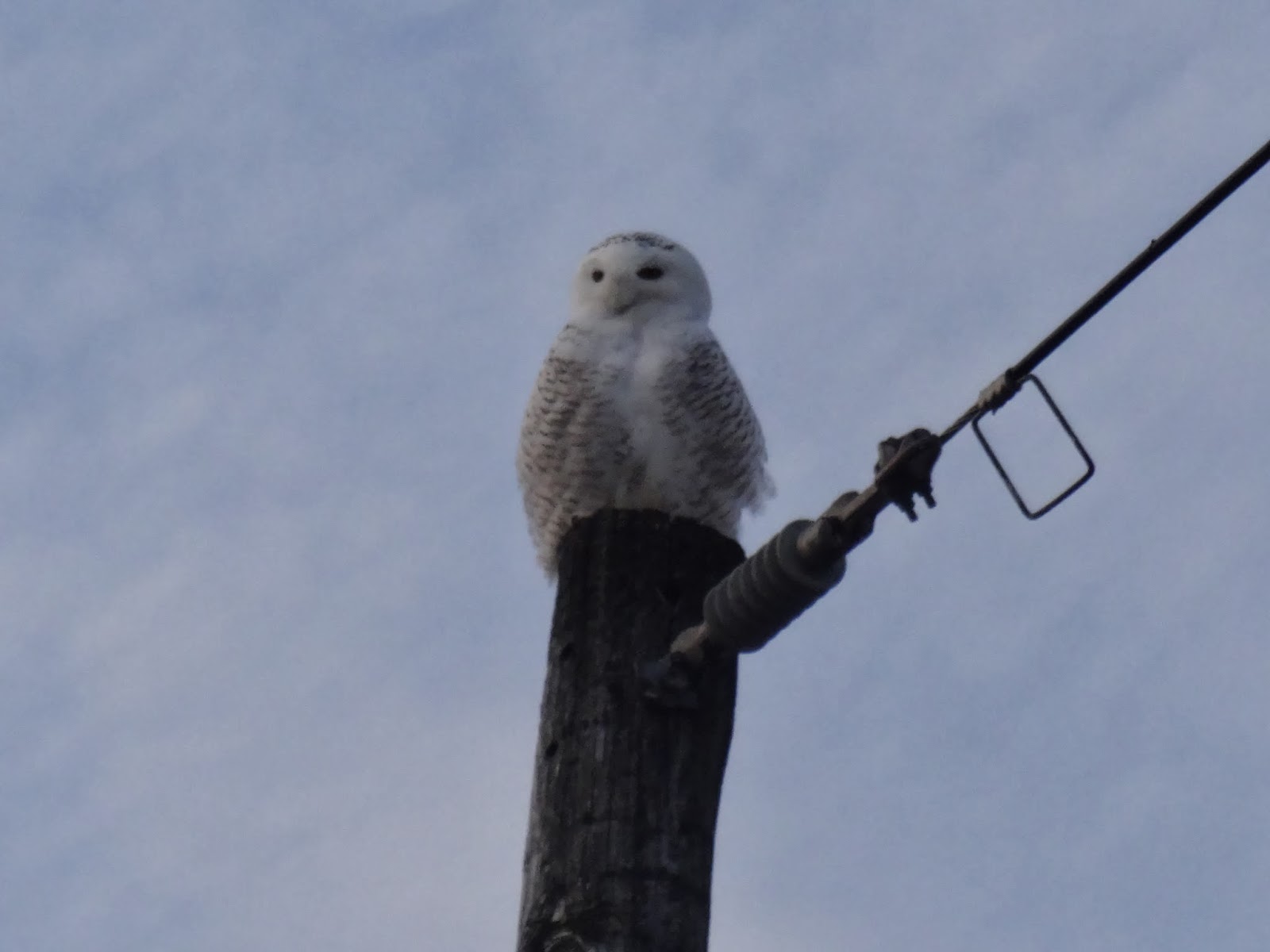 He was pretty awesome.

Last week on Monday I drove to Dead Creek hoping to see the snowy owl that EVERYONE was seeing.  No luck.  Friday I went back out with a friend.  It wasn't in the tree where everyone has seen it but two men told us where to find one. Sure enough we drove down the road and caught it on a silo.  It watched us but didn't move. We went back to Dead Creek and the men now told us where the "tree one" had flown off too.  We went off to find it and got somewhat close. We saw this one in flight twice.  It was incredible!  I hope to get out there again with my husband so he can see them too.

It's been a pretty relaxing snow day.  The snow has picked up again and now it's quite beautiful out. When I went out the snow had stopped for a bit.  Glad to see it's not quite done yet!

We had a snow day today, too. I made it out to run, but nothing major. Looks like we'll be back tomorrow.

Very cool you got to see the owl!

We should've had a snow day today but because we've already had 4, schools were open. Thing 1's bus slid off the road. Thank heavens I drove her because it was chaos.
Good for you for pulling the trigger on the half before it closed.
That last pic is spectacular. What a beautiful bird!

That's a lot of snow, not jealous at all!

Lovely cat you have, they look a lot the same.

It seems there are a few snow owls here in Holland too. That's unusual but it seems they came from across the ocean looking for better weather. They aren't spotted close to my home so I won't have the luck you had by spotting one.

I can say with great confidence I will retire one day without experiencing a snow day. :) I love the photos! The owls are incredible! I hope Rocco recovers soon.

No snow day for me. We had a premature "ice" day a week or so ago, but since I was working from home...

Nice pics of the snow owl. What a beautiful bird.

Poor Rocco! Did they put him on antibiotics?

We're on a two hour delay due to ice and my mailbox is frozen shut! I can't get it open to put in some mail that needs to go out!

Poor Rocco. I've been there with a couple of UTIs myself and they're not fun at all. I hope he gets better quickly.

Your snow pictures have left me drooling! I feel so bad for your Kitty. Hope he gets better soon. A snow owl....how awesome. Hope you rock your two half marathons. I have one in April and another in October. Yippee!!

Love the snow pictures and the owls - that is so cool! Hope your cat is feeling better soon. And yes, I totally agree with you on the blogging about gym workouts thing - it's so hard to find something to say...

It's so mild here, we've barely had a frost, never mind snow. That owl looks fantastic!

I imagine getting to the gym in the snow for you isn't a big deal as Vermont, I would guess, knows a little bit better how to deal with SNOW =) than Oregon haha, at least this part of the state.

As I'm sure Emily has mentioned we got hit pretty hard the last few days and Portland, not unlike Eugene, I imagine, has been on lock down---esp with the ice. This is the only weekend I have ever wanted a treadmill at my house =).

That owl is gorgeous. At my brother in laws house in CA a few weeks ago, I heard an owl but I never did see it.