What State Are You? I'd Like To Be Maine?

Have you done that internet quiz about what state you are?  I did it awhile go and I have forgotten what state I was but I know it wasn't Maine.  If I could choose though, Maine is what I would choose. 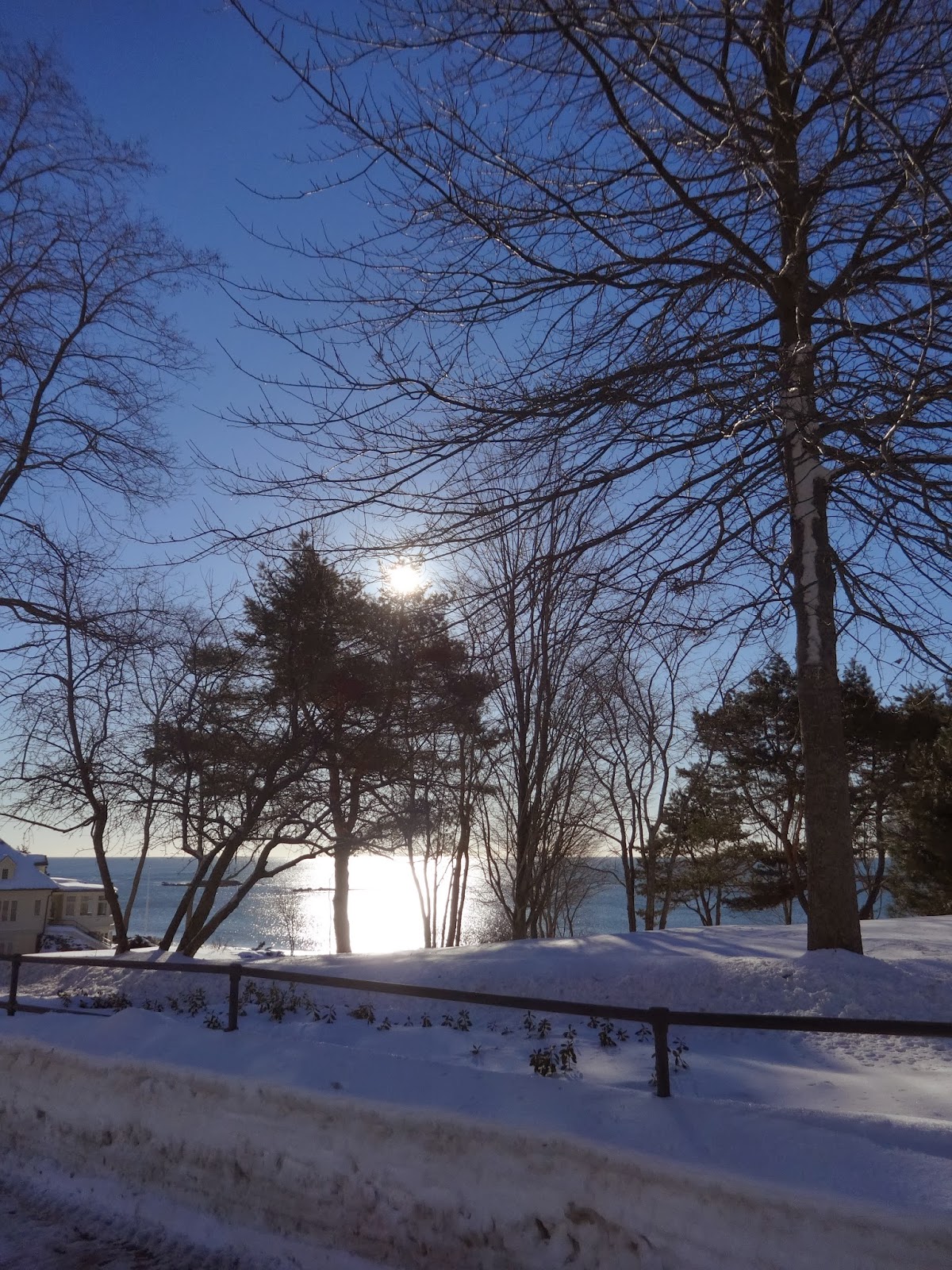 I had a good run on Monday.  It was colder but once again bearable.  I thought I might run farther but it took awhile and I had a friend waiting so I cut it short.  But I got almost 7 in.  I went south instead of north with a destination in mind......the bridge below. 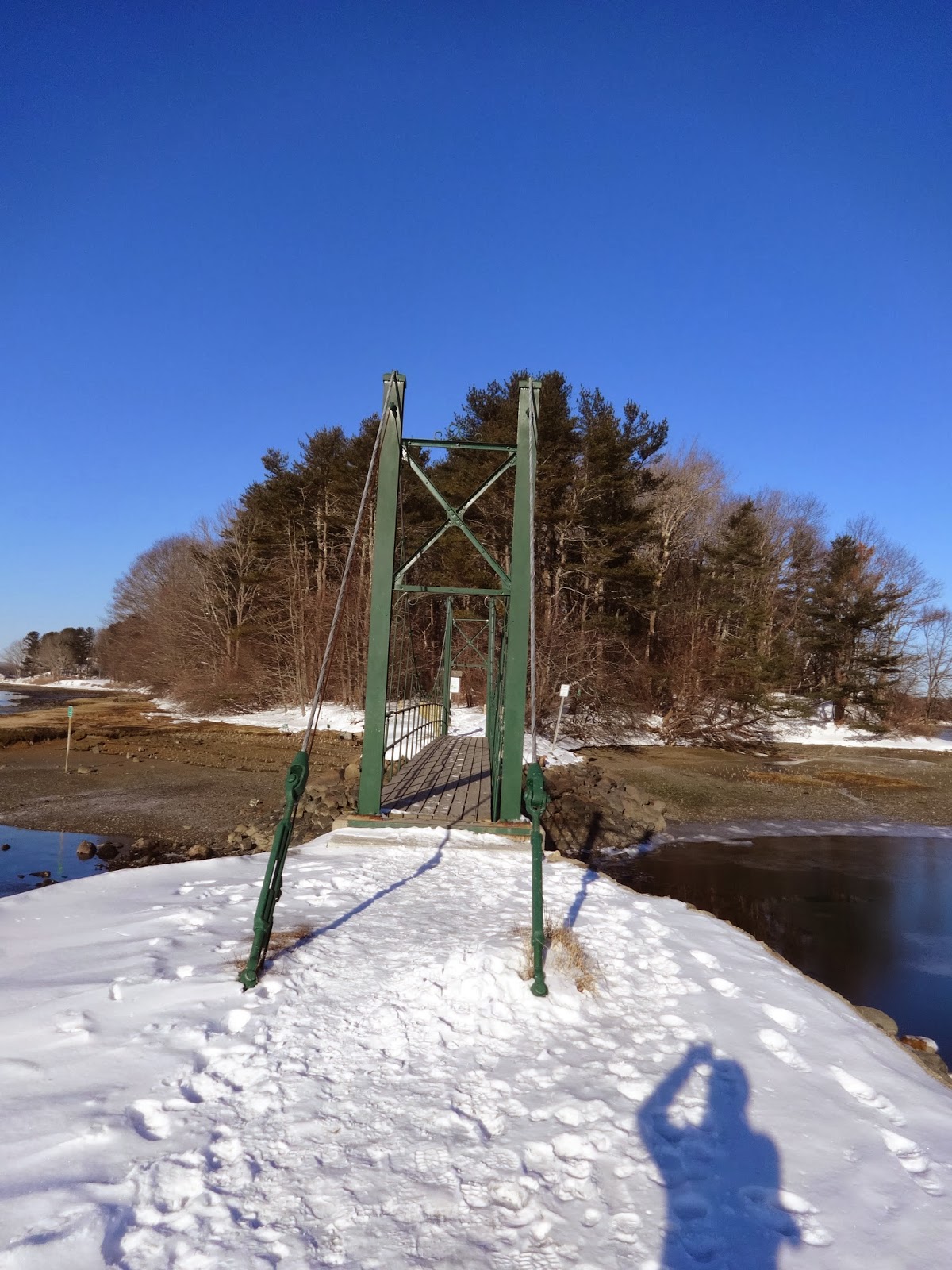 I had been here before one spring and thought I'd like to run here again.  I went a tiny ways on the trail
before I turned back.  There was a huge number of ducks around and I hoped another bird (like a snowy owl) might join them but no luck there.  But it was very peaceful and I hated to head back. 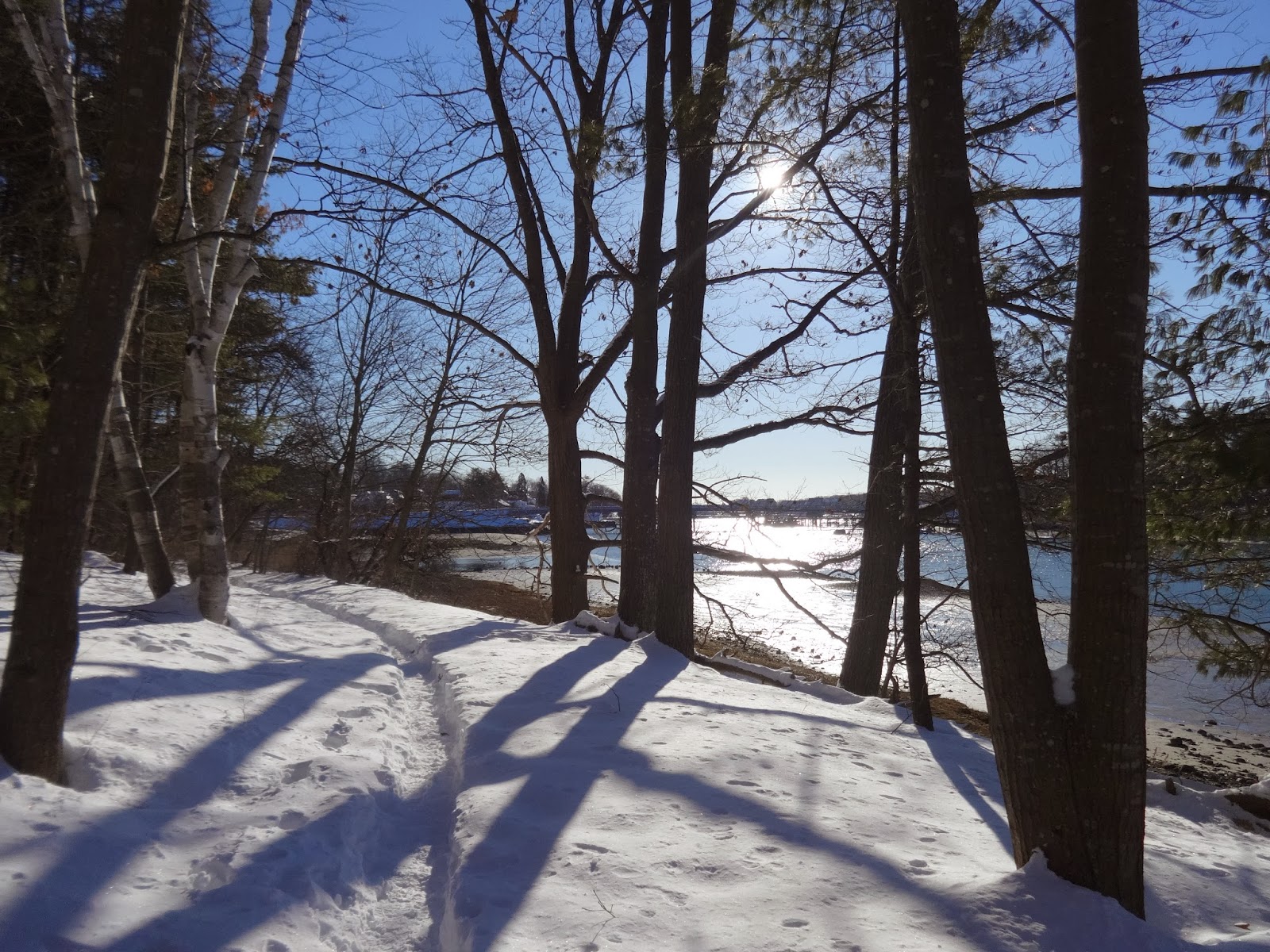 I stopped on the beach for a short run.  The sky all day today was as clear as I have ever seen it. The views were magnificent. 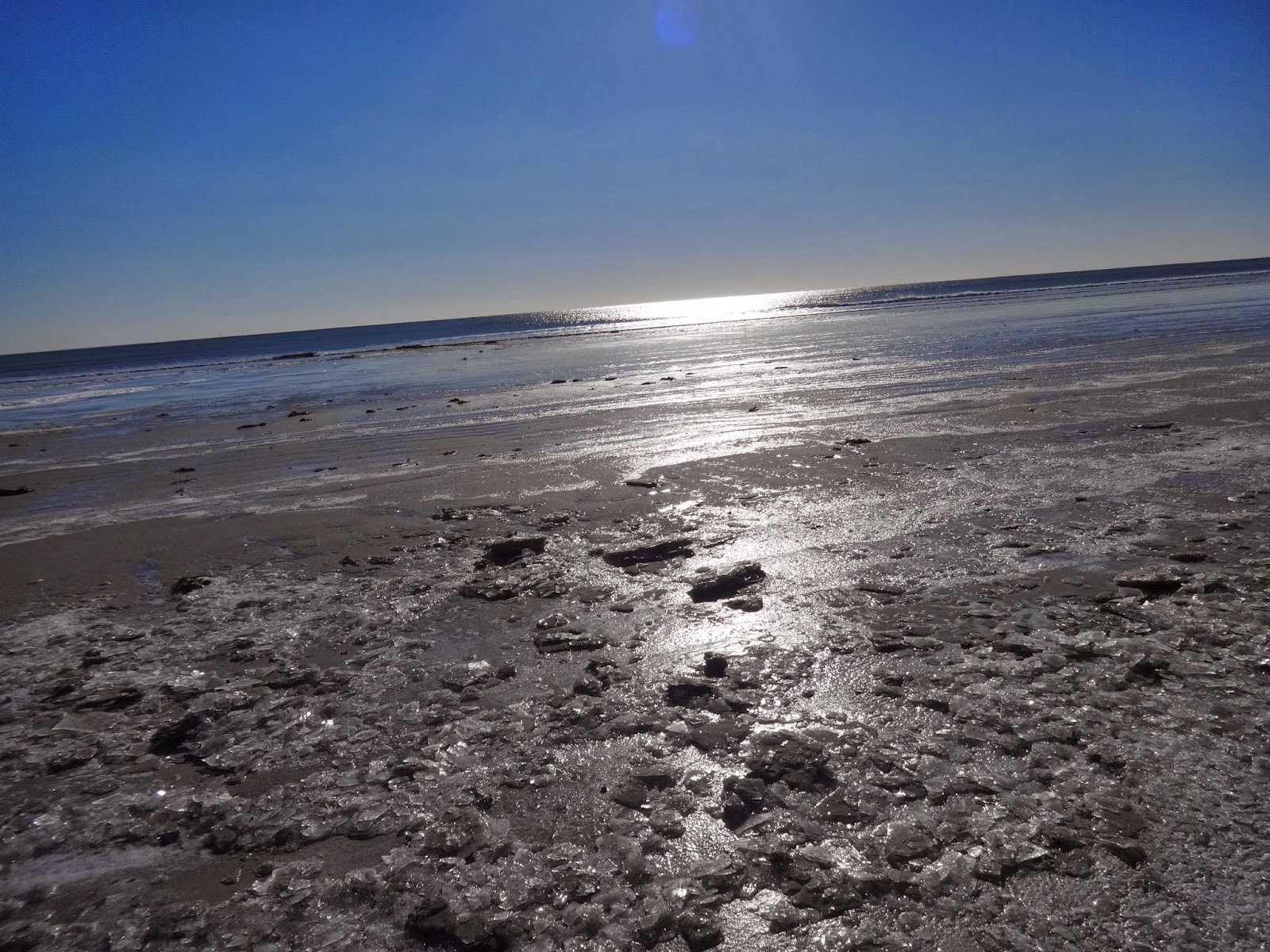 I made a stop at New Castle, NH, a magical place in my opinion.  There's a cute little school there.  Maybe they need a teacher? 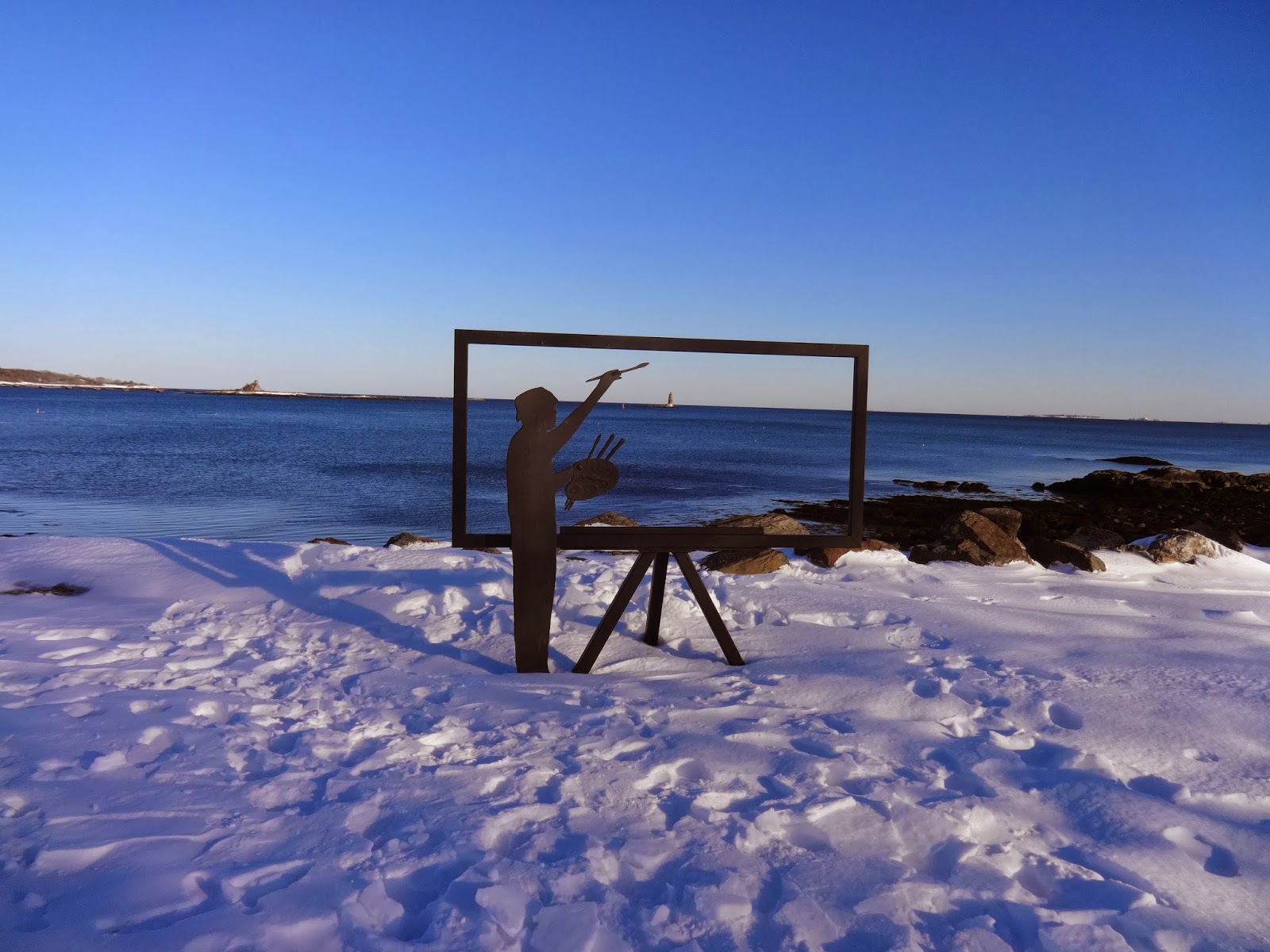 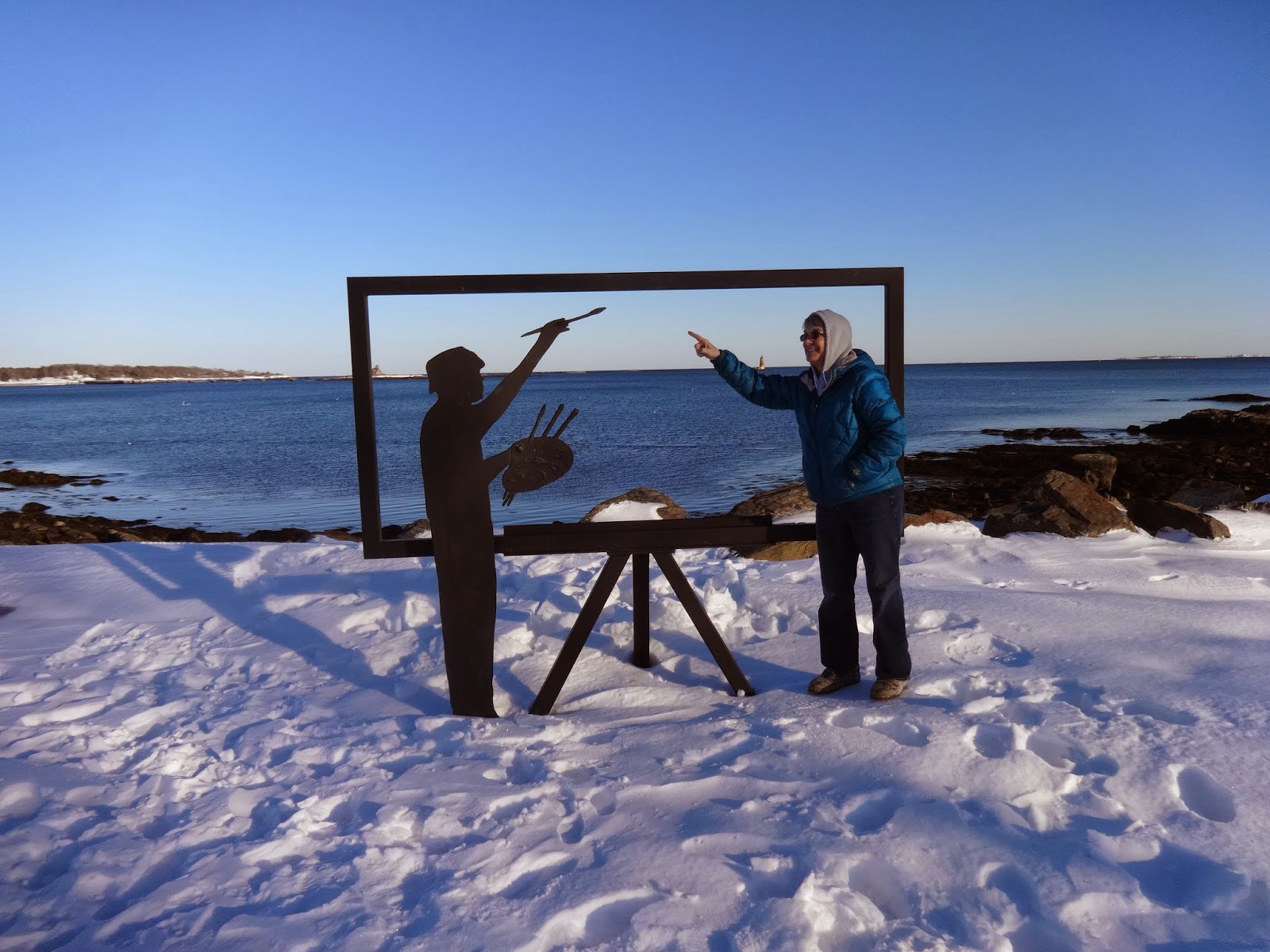 Today I did get up early and wow!  I gasped when I opened the door it was so beautiful. 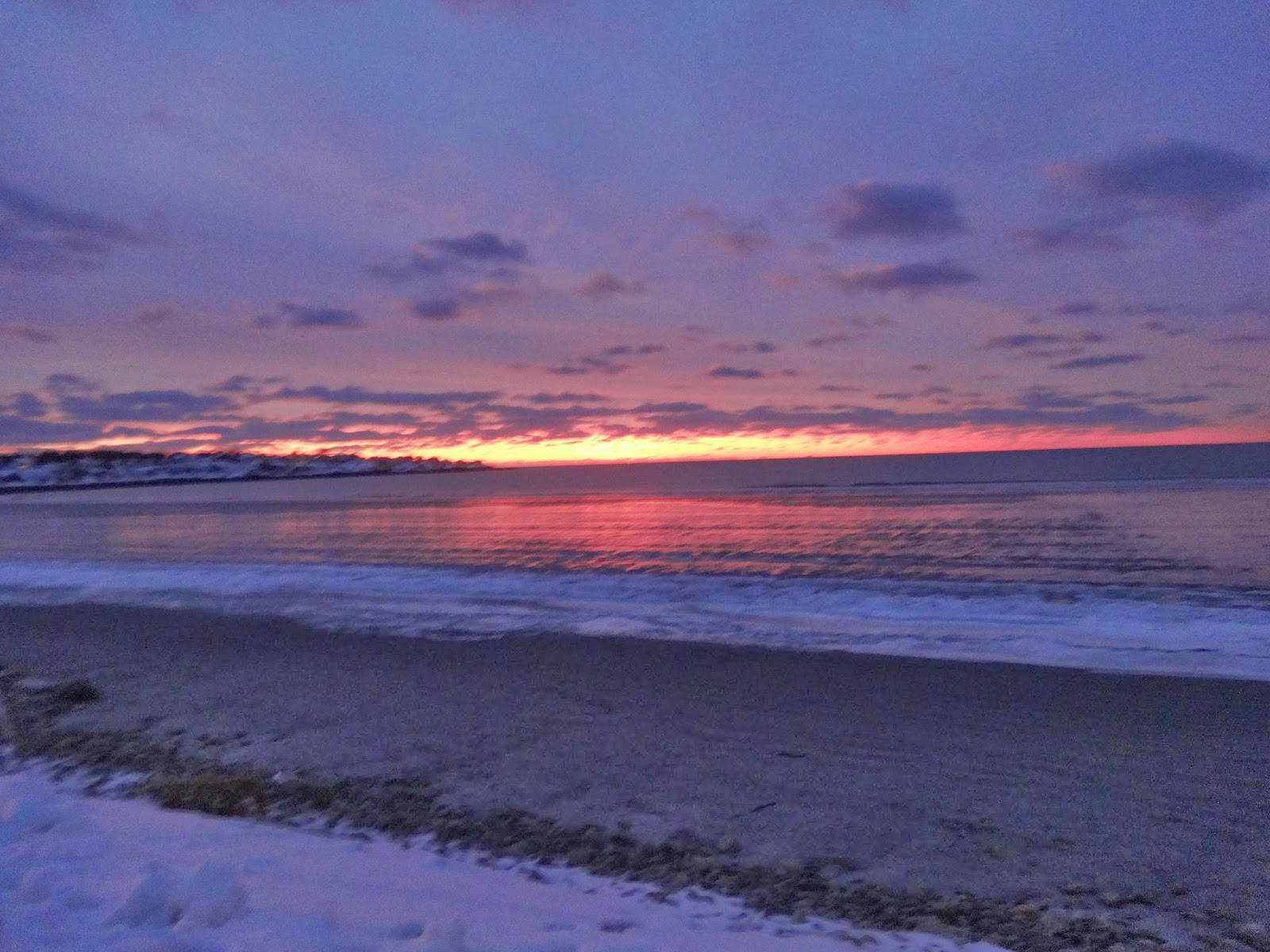 I stopped to take a couple of pictures but I wanted to get to the lighthouse to watch the sun come up so I hurried. It was still somewhat dark but there was a group of 3 runners near me.  The lighthouse was as  stunning as I thought it was going to be.  I hung out for awhile but it was too cold to just stand. I could see the sun peeking behind the lighthouse and reflecting off things way back on the shore but I couldn't quite see it.  When I got back down to the beach, the sun had completely disappeared and the sky was very cloudy.  Here are a few pics to share the beauty I saw. 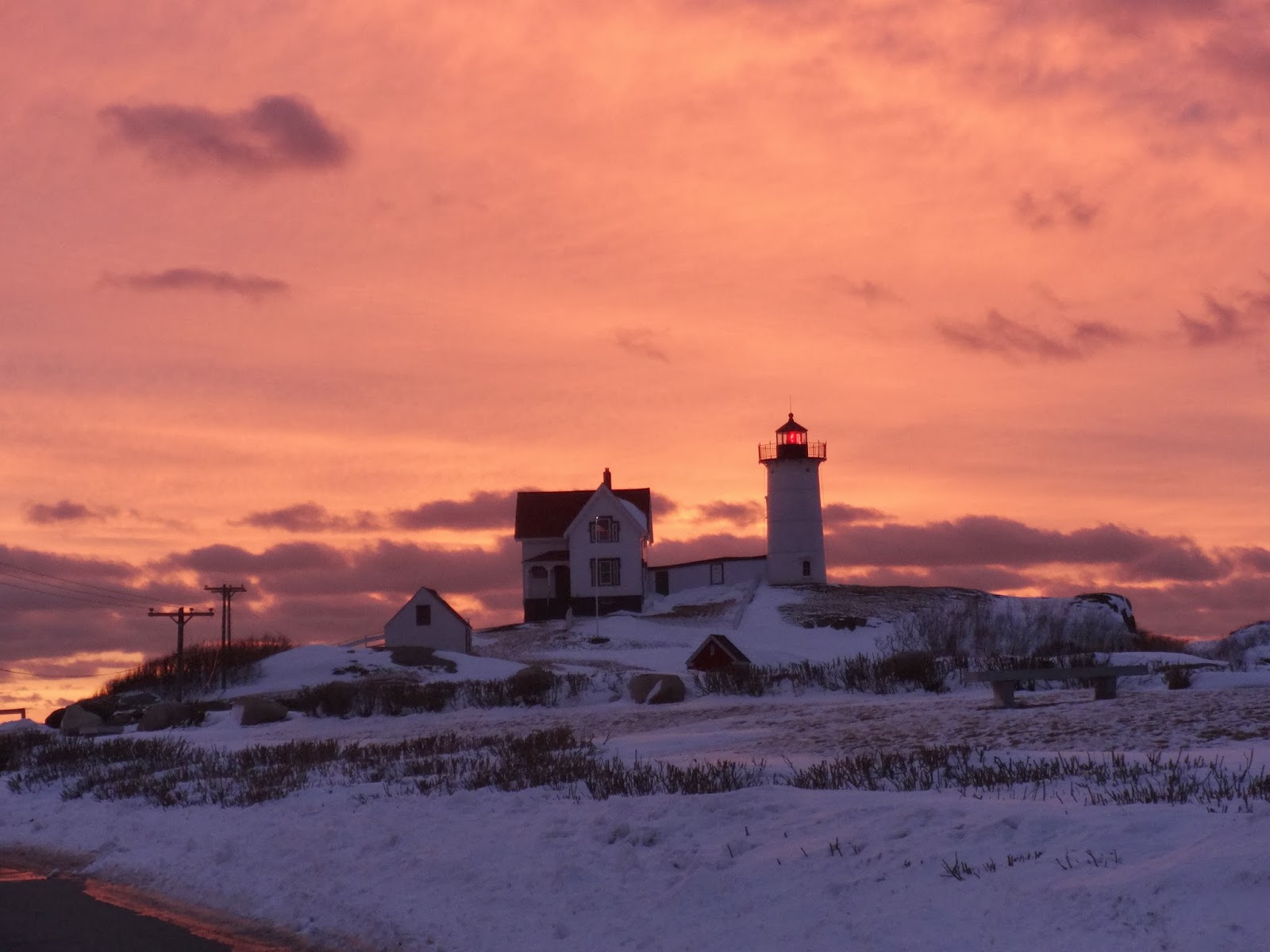 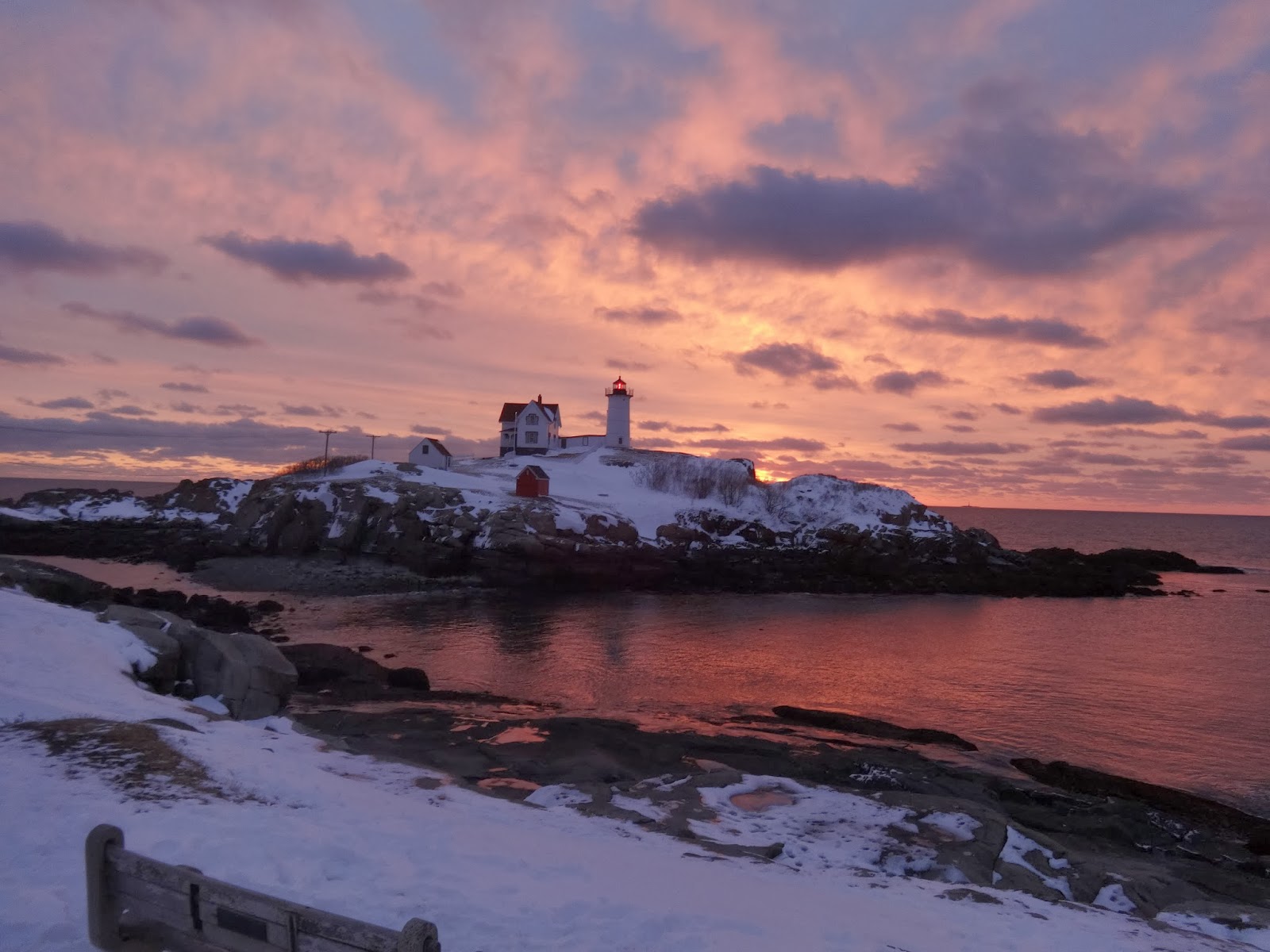 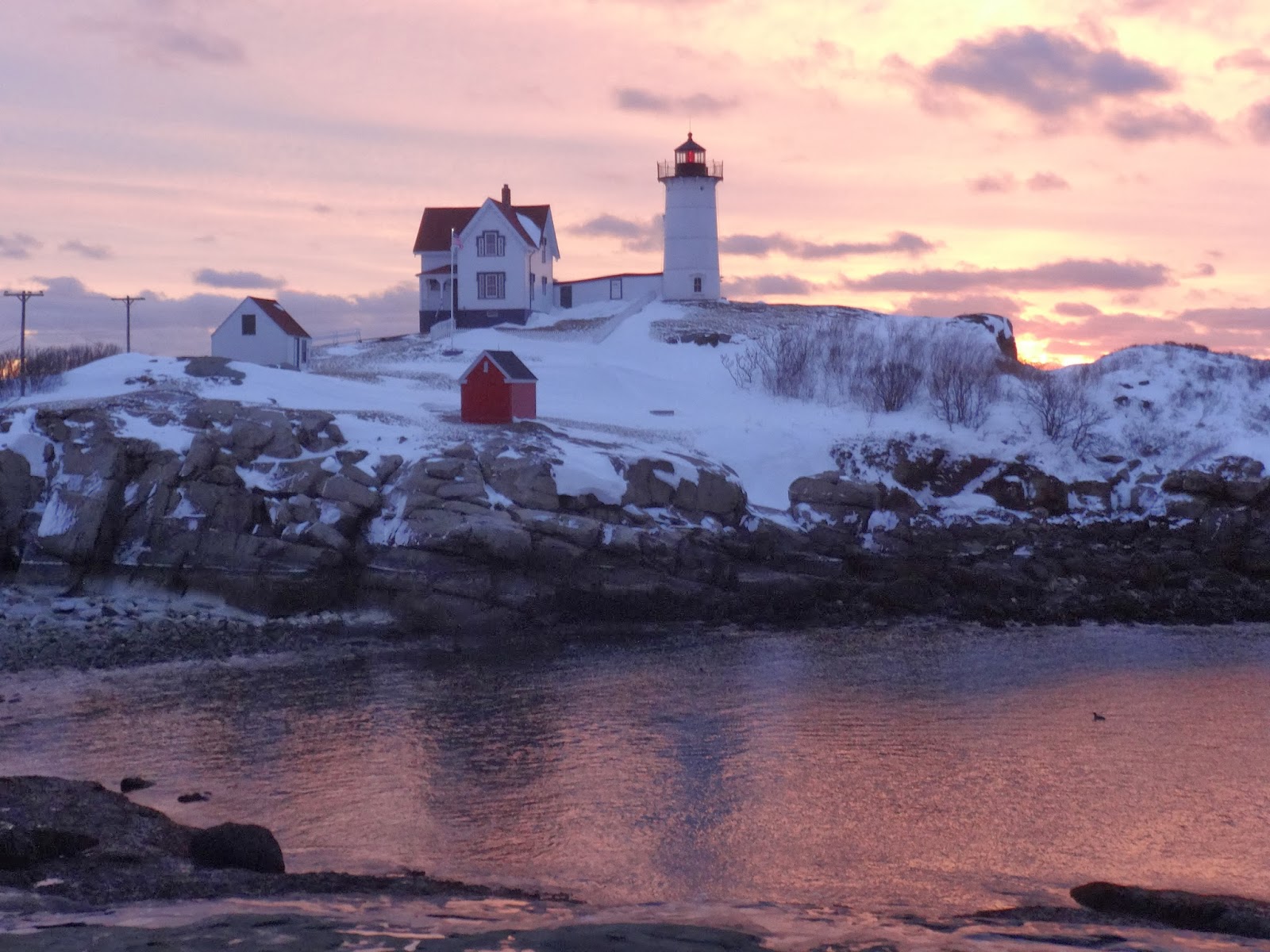 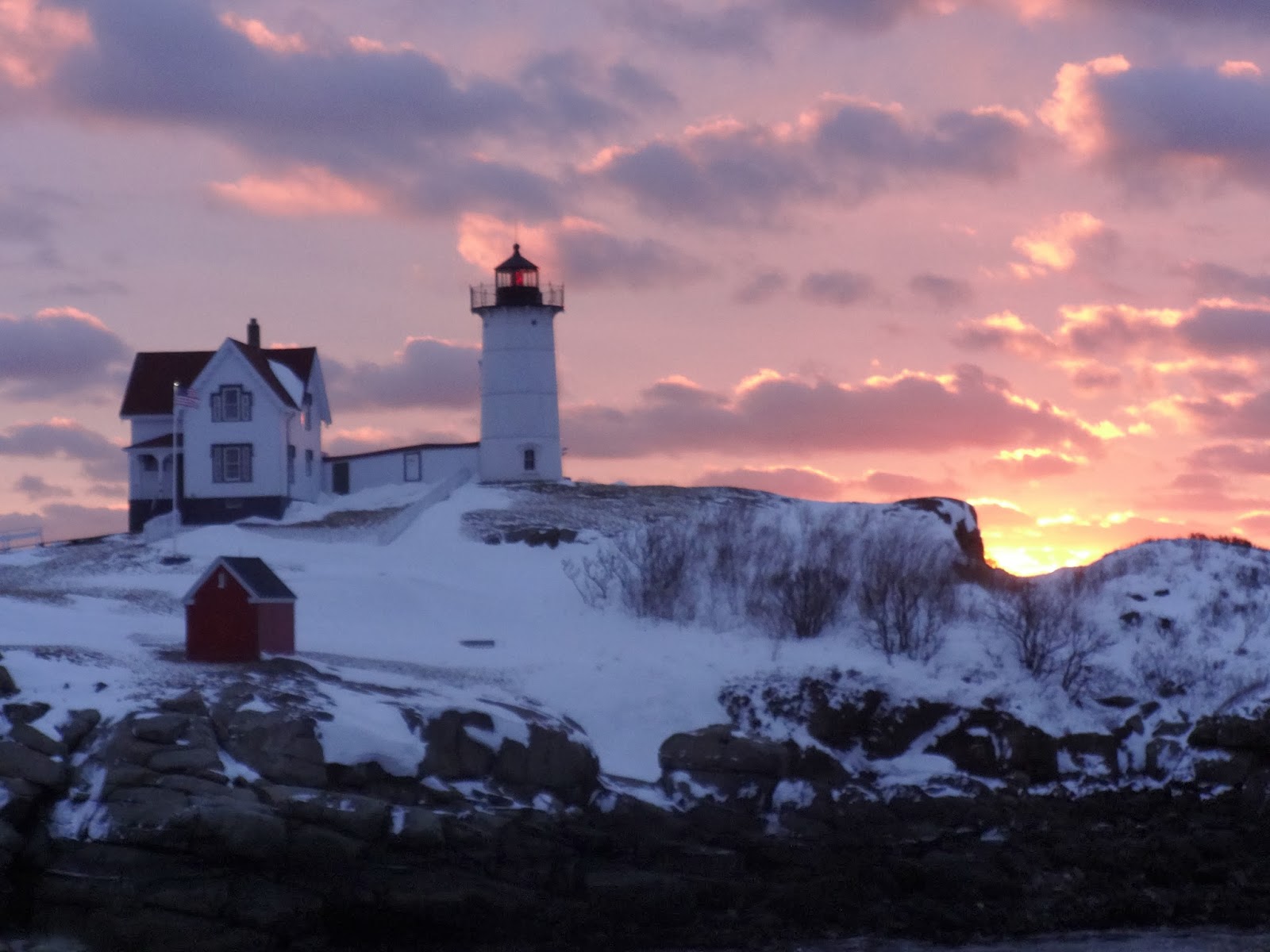 I have to say I agree with the "sentiment" below. 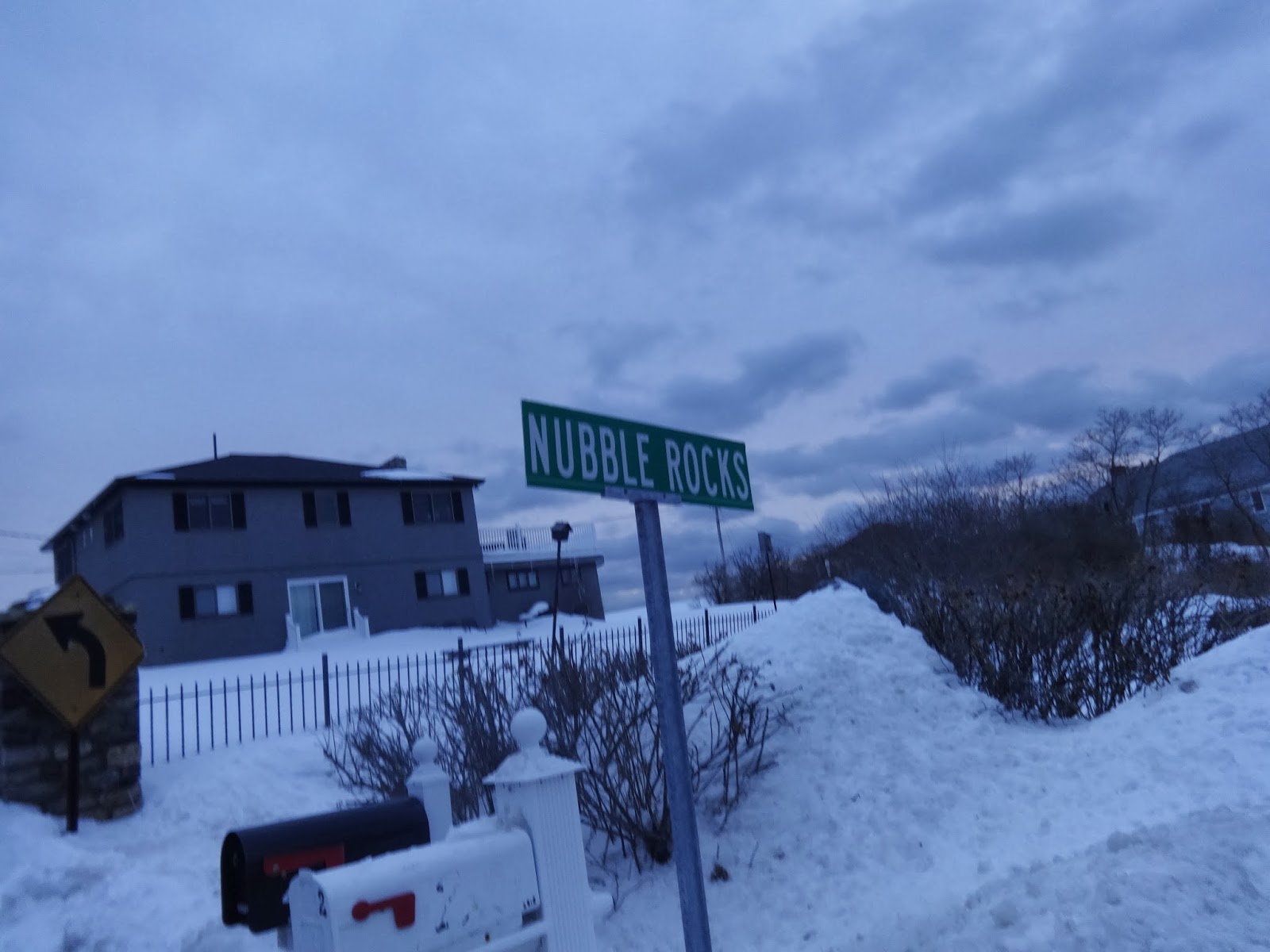 But a storm was coming and it was time to go home.  Now my husband says I should have stayed one more day. I would have. I would have. But I left and the ride home was not great. I hit snow and I had a mountain to go over. I got off the interstate - bad move - and it was terrible. Continuing on the interstate would have meant a lot longer ride but......  I was behind the plow truck for many miles until he turned around.  I decided not to go the usual way - my husband says I would have been fine - what's with all this late advice - and went over a mountain with several and I mean several tractor trailer trucks.  This mountain is more gradual than my usual one but it was no picnic.  I heard on the news other roads were closed because trucks couldn't make it and were blocking the road.  But many white knuckle moments later I was up and down the mountain. But then I got stopped for more than 30 minutes because of an accident. When I did move forward it looked very scary.  There was a car and a tractor trailer - upside down.  It was hard to tell if there were any more vehicles.  Very frightening. It's good to be home safe!

Such lovely pictures. I especially liked the third one--it has it all, and great composition. I love Maine, although I must admit when I was there in April a few years ago and the weather was bad, I did not love it as much as in early fall.

Hope everyone was ok in the accident and glad you made it safely. The lighthouse pictures were great. I love the pop of red against the white snow from the little building. And I got Alaska, by the way.

Oh gosh, I've been in that hairy driving situation in bad weather; very frightening. Glad you made it home safely.

I would love to go to Maine. The lighthouses are gorgeous. One day!!

Lovely photos! I know you always love it there. Glad you got home safely.

Oddly, I took that quiz and do you know what? MAINE!

Eek - glad you made it back ok. Beautiful pictures.

You know I got Alaska. I'd love to visit but 24 hours of darkness is not my thing. I love x100 all your pictures of Maine. Glad you made it home safely!! Aren't husbands good for telling you what you should have done after you did something different?

Wow, those photos are just spectacular. How could you not love a place that's so beautiful?

Absolutely gorgeous photos!
Glad you made it home safely!!