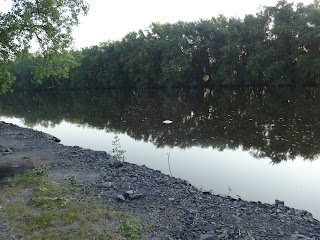 Can you see the white shape in the water in the distance? 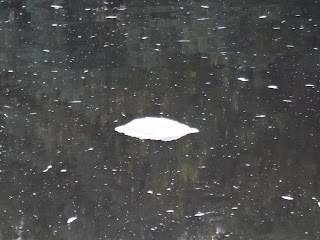 1.  Yesterday my friend and I were riding out bikes by 6:00 to try to beat the nasty heat we are having.
She had also ridden the day before and seen these large white "things" all along Otter Creek.  She said they were larger the day before and gone later when she rode back by.  We did not ride back by as I cut the ride a few miles short.  That is very unlike me but I think I was still feeling some dehydration effects and 50 miles was plenty.  It was getting hot and I was feeling somewhat "off" for sure.  Back to the above. Does anyone know what these are?  She thought they had something to do with frogs.  As you got closer they looked foamy.  They were all up and down the river. 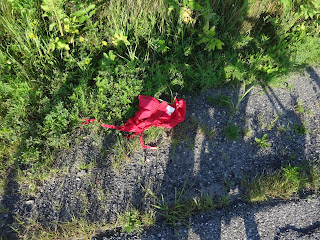 Can you tell what this is? 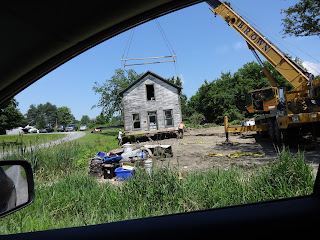 I went back for this photo and kind of blew it. When
I first went by the house was much higher in the air
and it was more dramatic.

3. This is a house that was being picked up in the air off it's foundation. Some of the house has been torn down but I guess they're moving the rest to another spot.  It almost seems like it might have been best to tear it all down and start over.  But it wasn't my decision to make.

Did you see anything strange on your workouts this week?

Also - I think I must have been suffering from dehydration when I talked about not having any identification on me in the Shipyard Half.  I had my bib number of course plus my first and last name on my bib!

I think your friend is right. Some frogs produce a foam-like "nest" in which the lay their eggs. We have some here that create that foam nest in a tree that hangs over water. As they develop the tadpoles drop into the water. I've never seen a bra on a run...well not next to the road anyway. :)

I can't imagine moving a house like that! I guess as long as they get it inspected to make sure it's stable when it is relocated?! Yikes!

Haha, after the snow melted last winter, I joked about starting a tumblr blog with pictures of all the weird stuff I saw on my runs. One morning, I saw 2 pairs of women's underware....and multiple airplane sized bottles of vodka! Hmmm...and another morning, a giant goldfish laying along Rand Road...

It is never dull!

I was going with Lockest Monster in the lake! :)

Finding entertainment along the way can be great sometimes to break up the monotony of the same routine. The bra would have had me smiling for the rest of the day!

Haha! I saw a funny sign about dumping this week. Must be use to having runners on the route!

Hahaha! The BIG red bra made me laugh!
We live in a town full of summer camps, and the staff seem to enjoy sneaking out for roadside trysts. I have found lacy knickers, articles of discarded clothing and (obviously) condoms... Gross. Glad they are putting safety first I guess!!

I've also seen a bra on my run. It was black padded one. Funny that you never see a skin-tone or white one abandoned beside the road. I'm guessing that it was one of those 'I can't stand this stupid bra because the elastic's totally gone on it' moment. What else could it possibly be??

I also once saw almost an entire outfit while I was out on a walk but the outfit was stretched over a kilometre or so. Shirt here, shorts there, undies even further along. I was quite disappointed that I didn't get to see the naked man who owned them.

I've seen multiple pairs of panties at times, I always think, man how do you forget those...

I have no idea about the foamy stuff, I'm sure it's natural.

I would LOVE to see that house in the air. I've seen homes on trucks before but never on a crane - that would be awesome. I've seen multiple undergarments on Saturday and Sunday morning runs - I figure they're probably from a wild night partying. But maybe they were just chafing the person or something.

Along with the bra... signs
that creatures are making good use of summer ;)