Glass Half Full or Half Empty

The glass half full will say I had a great 5K because I was racing it with my children!!!

The glass half empty will say I had a terrible 5K because it was the slowest one ever. 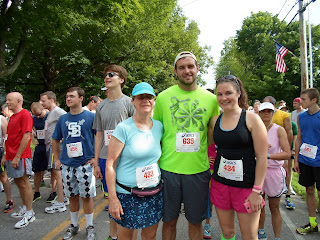 I am choosing the glass half full.  It's becoming less frequent I can race with BOTH my children so I am going to just love it when I can.

None of us were well rested and fresh for this race but both kids did great. Jameson was very pleased with his time and Emily was the 4th woman overall and first in her age group in spite on an hour trail run and a 4 mile hike up a mountain the day before.  The age group prizes were biscuits and strawberries. 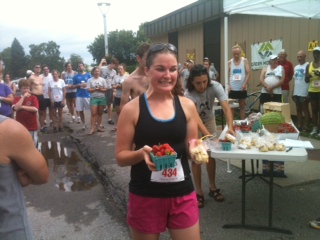 It was hot and humid running this.  Can I use that for an excuse?  My time was slower than in my triathlon(so much fun) the week before. Really?  I run faster if I swim a third of a mile and bike 14 first.
Plus it was my 7th day in a row of working out without a rest day. I do generally rest before a race but Em was here and I wanted to do something with her so no rest for me.  Unlike the tri I am at the top end of the age group. I kind of like the move to a new age group for the calendar year thing.

Okay enough excuses. I am slowing down. I had no oomph whatsover yesterday.  When I was running in the tri I really wanted to beat my time overall from the year before. It didn't happen (almost) but it really spurred me on.  Nothing spurred me on yesterday.

I stopped when I was running and took pictures of each of my kids and a friend.  Maybe without that I would have made up the ten seconds to the week before! Hey, I hadn't thought of that.

Both of my kids are off hiking again. They are certainly ambitious!  Here they are up to their usual goofing off at the finish line. 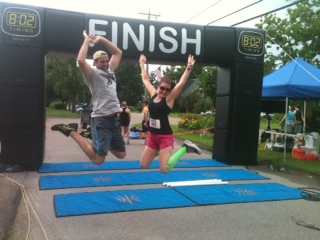 I love your family and the way you can share running and biking with them. And the heat is HUGE. I'm always thrilled with how much better I feel running when fall temps hit..."ohhh, I don't suck, it's just the heat that does!"

A 30 minute 5k might be slow for you however, for a LOT of people it's a GREAT time.

My tri runs or brick training runs often feel better and are faster than running races too. I think my legs like the warmup.

Glass half full for sure! Racing with your kids is absolutely awesome. Great memories being made for sure. Any grand kids in the near future? You could grandma/stroller people at that pace :-).

Sounds to me like you still enjoyed it. And yes, of course the heat and humidity will slow you down.

If I don't get a few rest days before a race I can't run fast. You had to contend with a week of working out and the hot weather - I think you did pretty well!

Lucky lucky you as you said. Your time was not bad. Just sayin,

So fun to race as a family! Definitely glass half full. The major thing is you got there and had fun with your kids.

I'm impressed with anyone who races in this heat and humidity!
So fun to get to race with your children too!

I probably would have a DNF in that kind of weather so to me you are a trooper who had a great time considering the circumstances.

Your slowest is my fastest lol. I came in just under your time on Thurs for my fastest 5K ever.

Time is definitely all relative.

The important thing is definitely that you got some good quality time in with family. How many people get to race with their gown children...very few :)

That's great! ...and yes, absolutely use heat & humidity as a reason for a slower time! Bucket list: to run one of my 1/2 marathons with my children. Congratulations!

Of course, the glass half full! Congratulations on your great 5k race! 6 min./km is a good time taken!

Glass half full for sure! Time is just one small way to measure success. I'd say the fun factor trumps time every time. Congrats to all of you!

Glass half full! I want to win biscuits and strawberries - yum! I like unique awards you can eat or use somehow (like a cocoa mug).

Glass full!!! Spending so much great time with your kids and having fun = a full glass. Slow 5k comes after a 64 mile bike ride a few days before. :-)