A Chairlift Ride in the MIddle of a Race

I signed up for this race months ago- it was probably cheaper by a certain date.  I was smart to not sign up for the 15K but really - a 5K the morning after a triathlon?  I went for it because it was unique and included a chairlift ride.  I always like different races.

But while I was running the 5K part of my triathlon I clearly remember thinking - "I don't want to do this again tomorrow."  But I did want to do the race. Christa was walking it and I texted her to see if she wanted a walking partner. She did and life was good again!

The other part I didn't give a lot of thought too was all the driving I would be doing. Both races were at least 90 minutes away which meant very early mornings and more time in my car than I really cared to be spending.  But I did it and both were fun.  Well one was fun and the other was fantastic. 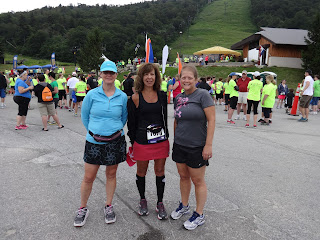 The weather Sunday was iffy but it only ever sprinkled.  It was a bit of a bloggy meet up as Christa, Darlene and myself were all there.  There were a lot of people there, I would guess many many were doing their first race.  None of us got the memo about wearing the race shirt but believe me it was a sea of green.  Former contestants on the Biggest Loser were announcing. I haven't watched the show in recent seasons and didn't recognize anyone. 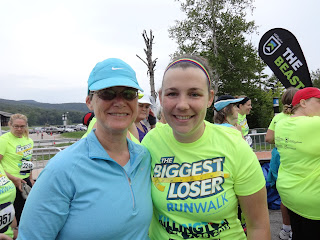 One funny thing.....I was at a family reunion the night before and found out my cousin's daughter was going to be here.  I was at the start line with many many people and looked and she was right next to me! 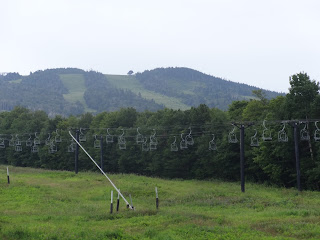 It was a fairly hilly course and I was really glad I made the decision to walk it. I was lame from the day before but truthfully I am even lamer today from the muscles I used walking it. Christa is a brisk walker!  It was pretty but cloudy so not as nice as it could have been. 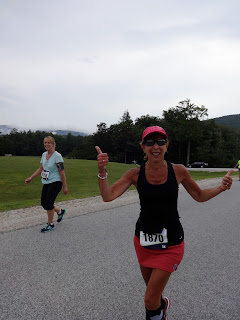 We met Darlene who was doing some running although very carefully!! She looked great. 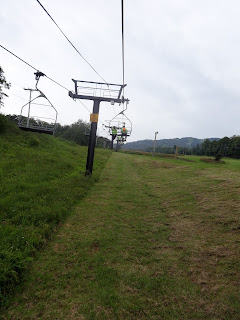 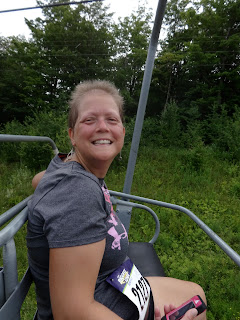 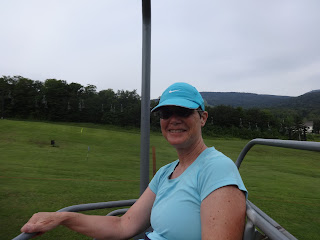 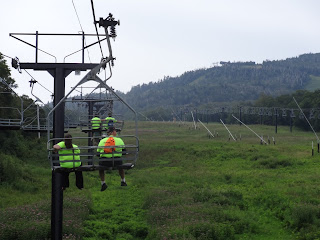 The chairlift ride was fun if a little surreal. I was glad I wasn't doing this race for time as - yes, they subtracted 6 minutes but the lift stopped twice so I'm sure those extra seconds were in there. If you were really racing it that would matter.  And then the walk back down was on a rocky road/trail that made me nervous. I am very leery of uneven surfaces since spraining my ankle. I don't want to go there again. So we slowly made our way down that part. 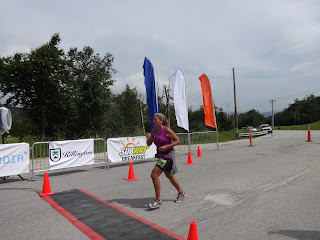 The 3 of us waited and watched at the bottom for Christa's friend, Becky, who did the whole 15K on a very hilly course. 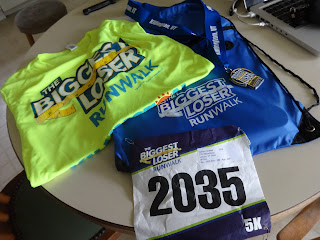 This race was great it that it got a lot of people out there racing who probably never thought they would enter a race.  It had medals always a plus in my book.  I don't think I'd do this again but I don't regret at all doing it yesterday.

I did this race on Sunday and my triathlon was on Saturday. I am still waiting for results before I publish that race report although I may give up.  They must be having problems as they said Saturday night or Sunday. Now you can't even access the race site as it isn't working.
Posted by ajh at 8:16 AM

A chair lift ride mid-race has to be the most unique race feature I have ever heard of!

I love those events which give the opportunity to run the first race. that's important for a beginner. Nice green T-shirt!
Completely agree with you about always running different races.

A chair lift? Now I've seen it all. Looks like fun. I've seen people promoting TBL races at expos twice now and they are SO pushy.
Good on you for going back to back! Badass!

My quads are sore but otherwise I am fine. Glad that I did the 5k not the 15 and glad to see you & Christa in person.

I can think of several races where I was dying for a chairlift mid race. I'll keep that in mind.

I thought it was a lot of fun. Thanks for walking with me!!

That sounds like a lot of fun - not the hill bit, just the chair-lift bit and the bit where you got to do it with friends.

What a fun event. With the chair-lift included I would have chosen the walking option too. I think walking this one gave you more time to appreciate the area.

A chair lift ride in the middle of the race sounds kind of relaxing! Glad you had a good time. I sometimes walk briskly with a coworker and we cover about 3.5 miles during lunch. It always makes me sore, especially in the hips!

That's pretty cool having a chair lift in the middle of the race, but yes would not be good if you were running for time....but who runs a race like this for time..sounds like a fun run to me.

Cool that you met up with some other bloggers and I'm sure Christa enjoyed the company!