Getting the Most out of a Long Drive

I had to get Emily to the train at 5 a.m. this morning. In order to do that I had to get up at 1:00.  Yes, that is right, 1:00.  We left at 2 and made it there with time to spare. Traffic isn't a big problem when we were traveling.  I waited until she boarded, truly hating to see her go, but I had plans of what to do next. 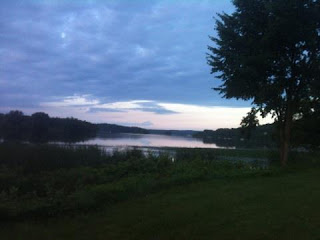 It was very pleasant watching the sun come up. 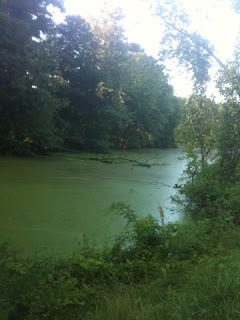 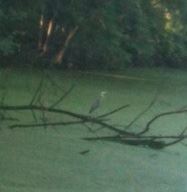 There were lots of birds to watch and listen to.

If I was driving all the way to Albany I might as well bring my bike and go for a ride. With many emails back and forth with Darlene, she directed me to a bike path that would be safe at that hour of the day. By the time I got there and got started it was light and not raining, the best you can hope for these days.  I found where I was going to park okay because Darlene gave great directions and I had done a duathlon there last year. I had a little difficulty finding the bike path and followed it until what I think was the end. I couldn't find it at all in the other direction. But I happily rode in the road, going across a bridge, briefly  on a busy road and then down a different road. I could see the water tower in Troy in the distance when I decided I really wanted to be back where I had started so I turned around and repeated some of my early route.  I really enjoyed listening to all the birds waking up at that time of day.  There was no one around but me and I decided I needed to do this again - ride early early in the morning.  Or run for that matter.

I had brought my old camera but it has stopped working completely.  My camera isn't back yet and I really miss it.  So I used my phone but it doesn't take great pictures. 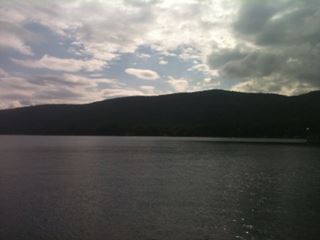 Lake George on my run.

Then I got some coffee and a muffin before heading off.  I had decided I would stop in Lake George and get a run in.  I had only run here in the winter when it is freezing so I thought it would be a nice change to run in warmer temps.  I found parking and a bathroom so I was off to a good start. There were A LOT of people out here particularly on the walkway near the lake. I ran 4 miles with about half of it being right along the lake. 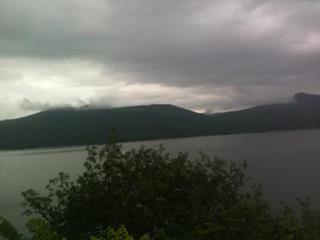 Lake George much farther up the lake. It was cloudy but
not as dark looking as these photos appear.

I decided I would go back home a longer, but more scenic way.  It was quite nice to do this.  I knew once I got home I would be too tired to get anything done so I might as well get some workouts in.  Mission accomplished.
Posted by ajh at 8:18 PM

You're so productive! Way to make the most of your early morning! :)

You're such a good mum to get up so early to get Emily to the train. I think I would have asked my better half to do it. But I guess there was a pay off in being to exercise in a new location. That's always fun.

Holy cow Andrea you are hardcore: getting up that early and then do a bike ride and a run. I'm impressed!

Waking up at 1am sounds horrible. Glad you made the most of it!
I was just thinking on my drive to work this morning (at 5:30) how much I should get out and run that early in the morning sometime soon.

Glad you were able to do it all. Wish I could have done it with you. Another time.

Great idea to take the bike along. Such pretty photos!

Yikes! One a.m.--I'm not usually even in bed by then. Love your new header picture, very beautiful. Happy biking/running/(sleeping??).

WOW, early! That was the day we moved in to camping about 1/2 way up the lake. I love Lake George!!