Shipyard Half Marathon - My Worst Race Ever 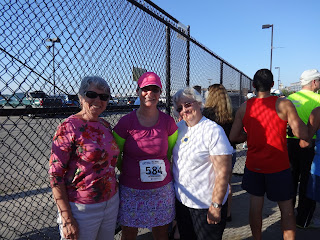 With my friends before the race


This was easily the worst race of my life.  Easily.  It's kind of funny because my marathon in Portland was my worst marathon but not on the same scale as this race.  I knew within the first two miles it was going to be a bad day.  I was already wondering if I would finish the race.  Seriously?  Wondering in the first two miles if I could finish? 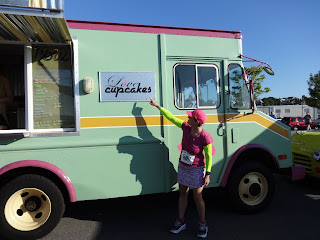 I located the cupcake truck before the race so I would know where it
was later. 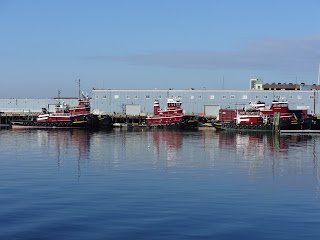 Waiting for the start was very pretty. 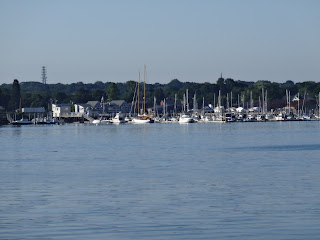 Yes. I wasn't injured but it was hot and humid like you couldn't believe.  I had nothing to give.  A friend told me she heard on the national news this morning about the dangerous conditions of the Shipyard Half so I am not just whining. 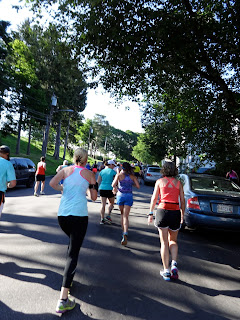 This hill went on and on with many turns. It
was my slowest mile.

The first two miles were slow which I figured  were good as I was starting out slowly.  Well...really I wasn't.  These first two miles were my speedy miles. In the third mile there was a steep hill that went on and on.  So what did I do?  I walked. I am a pretty fast walker and I couldn't see wasting what little energy I had running up this hill. So I didn't. I decided I would walk up all the hills.  I decided I would walk each and every mile at the beginning of it.  I knew time was no longer a factor. And I still wasn't sure I would finish.

The first five miles go by the Casco Bridge in each direction.  Some of the neighborhoods were nice but some of it was on a main street that had nothing much to offer. We went back by the beginning but I knew my friends weren't there as they were heading out to eat breakfast as soon as I had started. I had been amazed when they saw me in the beginning as I couldn't find them. 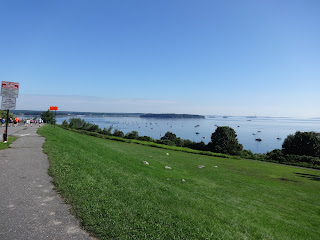 One of the prettier views on the course

I kept finding more hills and seemed to be walking longer and longer. I would tell myself I would start running when "that guy ahead of me" did. This worked very briefly.  We got to a point where we started meeting runners heading back to the beginning.  Not only am I wondering at this point if I will finish I am wondering if someone will call my husband if I end up in the medical tent. I realize I have no identification at all on me.  I am wishing I had my phone so I could call my friends and tell them not to worry when I don't appear at the time I said I would.

So we meander along. Much of the course is pretty and now we are heading for the Back Cove.  For years as I have driven through Portland I have salivated as I have driven by the Back Cove wanting to run it.  So here I am.  And what do I think?  I cannot believe that we are going to run around the whole thing. I cannot believe that that isn't way too far to run and get back to the finish in 13.1 miles.  I cannot see anyone across the cove so I am sure we will  not run all around it even though the race course clearly showed that we would.  I walk and think about how I could so easily walk the rest of the way. But then my friends would really worry about me. I drink water at all the water stops and splash water on my arm sleeves which are supposed to keep me cool if wet. 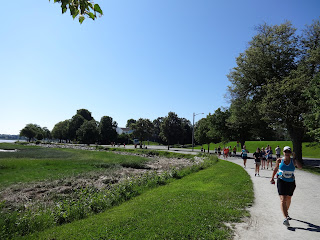 This Back Cove went on forever. It was actually 3.5 miles. 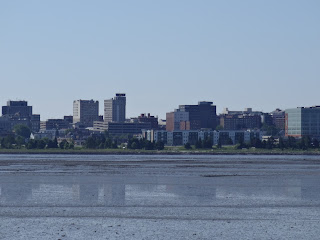 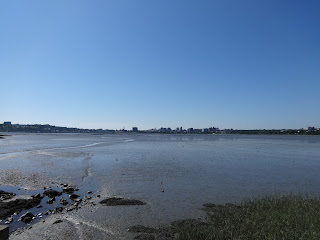 Not the Back Cove's prettiest moment

Everyone around me is running and walking. We pass each other back and forth the whole way.  It felt good to have everyone else struggling as much as I was.  Not that I wanted people to struggle but it made me feel the weather had a lot to do with it and it wasn't me.

I was glad to get to the end of the Back Cove. We had come down that steep hill earlier and I was preparing to go up it but pleasant surprise - we didn't have to. It was all pretty flat the rest of the way.

But at the last few water stops they had NO CUPS!  Not okay.  Plenty of water so they would pour it into your hands.  But you don't get a lot that way. When I was still in the Back Cove I saw them drag the container of used cups over and start to reuse them.  Ewww!  Did they let people have an informed decision as to how badly they needed that water by telling them the cups were recycled? 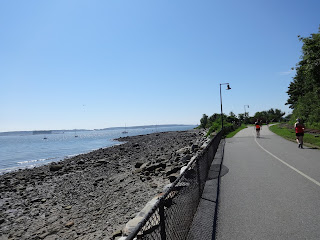 The final part was quite nice 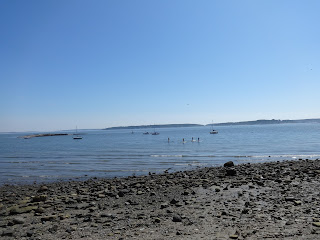 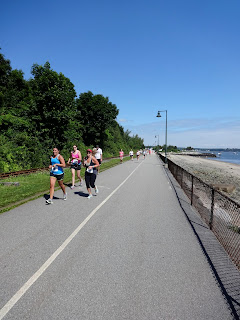 The last part was very pretty. I would love to go back and bike it (of course) or run it on a more pleasant day when I had energy.  I was still struggling but knew I would finish. I did not want to walk over the finish line so I had to plan for that.  It was definitely more than .1 from the mile 13 mark.  The 3 mile mark for the 5K was quite a ways farther so yeah, shouldn't they be in the same place?

I saw/heard my friends but I admit I could not muster up a smile for them. It was definitely put one foot in front of the other and move forward until you cross the finish line.

Then I went and hung - really hung - on a pole until I thought I could move.  I got my water bottle and went to fill it up but the line was long. Really?  I need that water NOW.  That was hard.  I needed to walk and I needed water. Standing in a line not moving with no water was not working.

The first thing I ate was a Yoplait Greek Frozen Yogurt bar and it really hit the spot. I had no desire for the pizza but did get the ice cream.  Coffee!  I found my friends and we all wandered around having some samples.  I did not get my beer as the line was very long and I didn't want it badly enough.

One problem I was having was leg cramps. Kind of bad. I had never had these before and assume it was something to do with dehydration. I didn't have to pee forever! 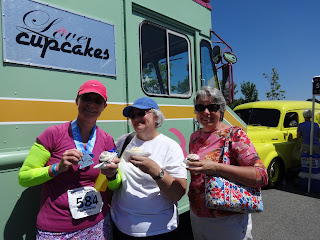 Before we left we all got cupcakes.  Then we headed back to the hotel which had a 2:00 checkout for racers!  We shopped a little and had a great lunch/dinner on the way home.  A great weekend in spite of  not a great race. I still enjoyed it. That's who I am I guess. 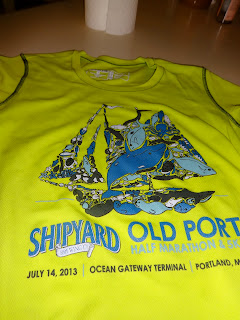 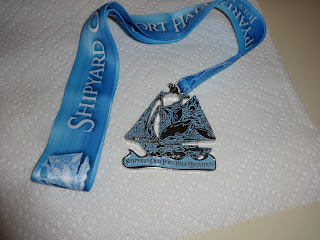 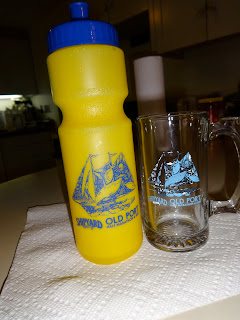 That sounds terrible!! My runs in the heat have been terrible, though I've just taken it easy and been REALLY glad they're short. I had that don't know if can do it feeling today -- for THREE miles! You are tough to stick that out! At least there were some good views to enjoy...or plan to enjoy next time!

I totally get being glad you weren't the only one struggling. That's how I felt after Dirty Kanza reading the race reports of the fast people who finished...ok they complained about the wind too! I'm not just a wimp!

That's so tough! Yours isn't the first race report I've read about this event that said worst race ever. Getting to the finish line really showed what a tough athlete you are.

Even though you had one of those terrible, horrible, no good, very bad days, you still salvaged it by: looking sharp in your race outfit, it was sunny and not raining, and you found the cupcake truck which definitely helped put a smile back on your face. :-) You will have a better day next time.

Wow it's like we had the SAME DAY!! Oh wait, we did! So much misery, so many hills, so little water :-( sucktastic to the max. Glad you made it to the end and avoided the med tent.

Oh you poor thing that race sounds miserable. Used cups?? Seriously if it comes to that I think they should call the race. Ugh. Way to push thru and finish that sucker!

Top 40% of your age group is awesome! Way to finish in tough conditions. All those lines at the end when you need water and want beer sound annoying.

Sweety you finished, you did it!

But I feel for you. You might remember I had 2 DNF's because of the heat so know I wouldn't have finished this one. But you did and you can be proud of yourself.

This post shows your strenght: you crossed the finish line in spite of those tough conditions.

Well done for finishing that one! Running in the heat like that and then having water/cups problems is no fun at all. You did great! My worst half is 02:49 so you have nothing to worry about. You will be stronger after this.

Ok never run without I'd and a phone! I read another blog about this race and was not as sad about not doing this one, now I am sure it was too hot to run 13.1 miles, you are tough! I have run slower halfs and I too rather have a bad one than no race.

I am so sorry you had such a bad race! I was really excited to hear your race report because I've been interested in this one, but now maybe not. You should be very proud of your finish. Sounds like a hard day!

Wow. It's awesome that you finished that race! I avoid summer races for this very reason.
Awesome medal too!

Wow! You're the second person I read who had bad reviews on this one. It was really hot, but not as bad as the half I ran a couple of weeks ago in Texas, The Jalapeño Half. Maybe I was delirious trying for that buoy - which is now floating in my pool!

You are right, I hadn't read this yet. I'm trying to catch up on all my blogs on bloglovin'. I think I have less than 40 left to read.
Tough race. Thanks for coming yesterday! and for the iced coffee :)

im glad you finally got to run back cove, but hopefully you can come back and do it again when its not so damn hot! biking along the trail is nice as well. oof, what a day. but you did it! :)

I felt exactly the same way about the race... WOW it was a hot one! I just finished my blog post about the race - I think I was blocking out the memories until tonight! Congratulations on finishing!