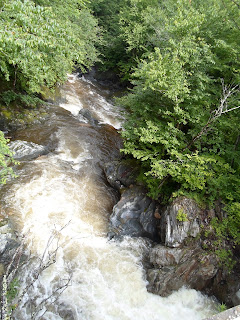 On my long run - the river running much faster than it typically does.

2. My last two long runs before my half marathon have been hot sweaty messes.  It could very well be a hot, humid day so I guess I'm preparing. But it's certainly not my favorite weather to run in. 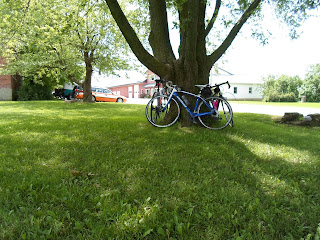 We stopped at Monument Farms for fresh chocolate milk
and drinkable yogurt. We may have planned our route around
being able to stop here. 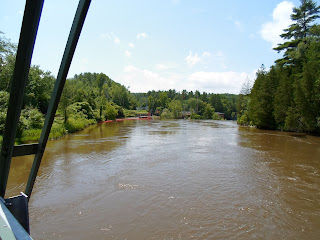 Crossing a one way bridge on Otter Creek which is very high. 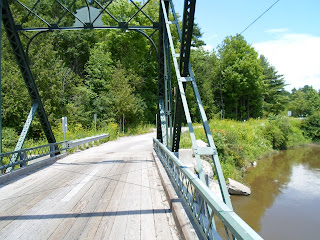 3. Or apparently bike in.  I rode 64 miles on Thursday with two friends.  By the time we finished I was kind of grumpy which is not usual for me.  I was behind the whole ride which is how it's going to be with these two and that's okay.  But I got tired early and didn't have the stamina I had the week before for that 100.  I liked the route we took although by the time we were done I was way over hills.  But we did go on some new roads and I always love me some new pretty Vermont scenery. I'm not taking many pictures these days because I'm using my old camera with the cracked screen.

4. Rain rain rain rain. That is the case every day.  The rivers are constantly roiling.  All the water is stirred up and brown.  Lake Champlain is almost at flood stage. Roads are flooding and washing out. Some Fourth of July events were cancelled. We have been lucky but we are all just that one rain storm away from disaster.  When we biked we saw standing water everywhere and went by streams that hadn't been there before.  This is from 3 days ago and there has been a lot of rain since.


Lake Champlain is literally overflowing - it's just inches away from flood stage.
It's currently at 99.2 feet. Flood stage is 100.
It's already poured over the edge, and water is taking over the King Street Ferry Dock.
We reached 103 feet in May of 2011, but it's never been above 100 between June and August.
"We're over three feet above what we should be for this time of year. We should be around 96, 96 and a half, so we're nearly three feet above," Scott Whittier said, who is a meteorologist for the National Weather Service.
Seasonal camps, businesses and homes have already been impacted by flooding.

It could also impact the tourism season, since this is when the lake is used the most. 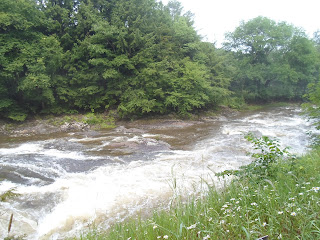 5. This is the newest picture taken on July 4th morning.  Yesterday afternoon a young man about my son's age drowned while swimming in the river near here. All the water ways around here have rapid and new currents due to the daily downpours.  Very tragic. 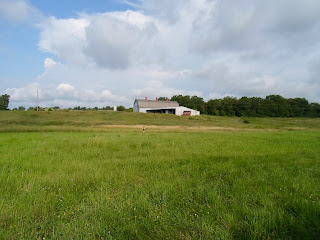 Look in the middle of the field to see Emily on her way. 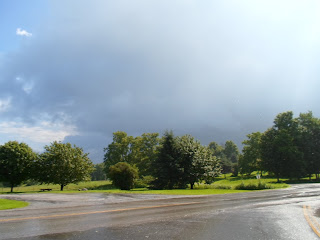 Wondering if it's going to open up again.

6. This morning Emily and I went out to do our workouts. She was trail running and I was biking.  It was sunny and beautiful with no rain forecast until the afternoon.  She set off through a field (this is the girl who also hates snakes?) to trails unknown while I went off to do a favorite bike ride.  I slathered on the sun screen and was happily at about 8 miles when I noticed the sky to the east was ominously dark and it looked like it was raining in the valley.  I had not even brought a baggie for my phone!  I was debating whether I should go back to my car as I approached a point where it would be easy to do so.  I had parked in a different place so Em could access the trail.  Just as I got off my bike to check my weather app (really, AJH, just look at the sky), the heavens opened and it began to dump.  I got under two trees (no thunder) and stayed a little drier maybe there. I tried to check my phone without ruining it in case Emily was trying to get hold of me.  As the rain began to let up it rang and it was Em who had found her way back to the car. I was about a mile away and hurried as it looked like it was going to let loose again.  We abandoned our plans - I had gotten 11 miles in, she had run for an hour. We went to get some excellent donuts and bagels before heading home. Emily then went off to hike with her brother but my exercise for the day was done! 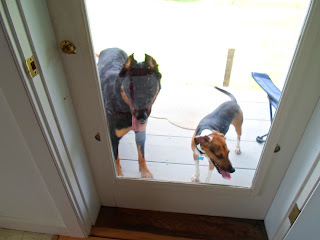 I had trouble getting the two of them into the same photo!  Here
they're looking at Rocko.

7.  When Jaxon came to visit today before the hike he brought a friend. Both dogs joined Em and Jameson for the hike.  I bet they'll sleep well tonight.

And tomorrow Jameson, Emily and I are all doing a 5K!  Yay!

That's some awesome bike mileage for the month!!

Hope the rain subsides soon. We had a pretty wet spring but it's finally drying up here.

Congrats on your bike mileage which you did in June.

Sorry to hear that countryside has been damaged by flooding. I Hope it will not impact the tourism season!

Great bike mileage! Good luck in the 5k! As much as it stinks, heat training does pay off, I promise!

Haha! "But I got tired early and didn't have the stamina I had the week before for that 100." You made me laugh...were you expecting that 100 to leave to lingering fatigue? :) Your training is going amazingly well considering the crappy weather! I do hope you avoid serious flooding...it's been crazy!

That's a lot of biking you've been up to! I always keep my phone in a small bag for that very reason! Have fun at the 5K!

Ha, good for you on planning your route on where to stop for a treat, errrr I mean to refuel. We had a dog named Harly! Seems to be common. Good luck at your upcoming half!

A400+ mile month is awesome! Congrats!

Weather this year has been crazy. We still have to mow the lawn in July. The yard is usually dormant by now in St. Louis.

Wow, that's a lot of biking (and a lot of rain)!
Glad Emily was able to go home for the holiday weekend.