I stress before triathlons which I do not typically do before running races but nonetheless I love them.  There is just something about putting your all into 3 different disciplines and the craziness called transitions between each one that really floats my boat.  I suck at swimming. So what!  I am finding out more and more that I am not alone and others are also saying so what and getting out there and "triing."  There is a very good local athlete that stood next to me at the swim start yesterday and seemed to share my feelings about the swim.  I was surprised as I see her as an amazing runner who often wins races/masters divisions.  But when I looked at results later I saw that she barely finished the swim ahead of me and her bike ride was rather similar to mine too.  The run however was another story!  She's willing to move her top of the pack to middle of the pack for tris as I seem to be willing to move my middle of the pack to bottom of the pack.

I love all the stats after.  You get to see how you did overall, how you did in the swim, the bike and the ride plus those crazy transitions.  Surely those winners who spent 22 seconds and 19 seconds in the two transitions has magic powers.  There was also three 12 year old boys who everyone seemed to know and they had loud cheering sections all along the course.  I know because I ran with one the whole way.  Plus I passed two on the bike and thought I was going crazy and "he" had gotten ahead of me without passing me.  One of them did the swim in 8:12 which was faster than the guy who won the whole tri.  He did the whole tri in 1:13.  Yowzer!  My friends (Heather and Christa) watching seemed pretty impressed with what they saw of him. 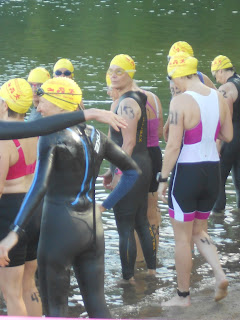 This is similar to last year. I am looking
off at where I have to swim quaking in
my bare feet. 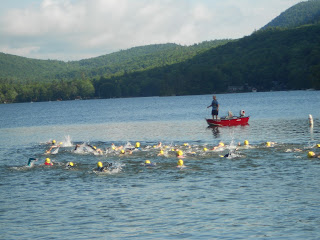 I'm out there somewhere. 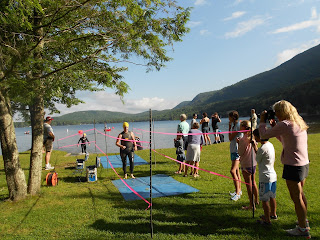 I'm thrilled as the swim is done! 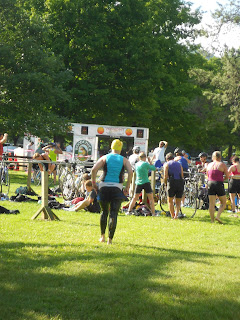 The wet suit came off quite easily.

Yesterday I really felt like I gave it my all.  I came out of the swim huffing and puffing which seemed good as I was working.  I found myself running as far as I could into the water at the start which seemed to keep me with the pack so I felt like it was working.When I was swimming I seemed to be with a bunch of women for quite a ways. We were swimming into each other's feet and getting in each other's way but I just felt good I was staying with a group. As we got farther the group spread out more. I knew there were swimmers behind me but I couldn't tell how many.  I did A LOT of breaststroke. I felt better/faster when I did the free style but I just couldn't maintain it. I was very nervous and felt less so when I could see what was happening.  I was a little worried about if I could really do the distance which I know I can but I did feel a little panic creeping in. The breaststroke helped keep the panic away so breaststroke I did.  Once I finally got to the large orange buoy and turned around the sun was in my eyes and it was hard to see.  I followed the other women although some seemed to me to be going too far out so I stayed away from them.  I couldn't see the buoy we were swimming toward but thank goodness there were swimmers to follow. Finally finally it was time to go into shore and get the wet suit off.  Yes!

Time wise- I looked at my watch which I had remembered to start and it was around 15.  Last year I did this in 14:31 so it was slower but in my world not that much slower.  This is much faster than I swim in the pool, thank you buoyant wet suit, so I was okay with that. Of course I would have preferred to do as well but not to be. In fact it was 15:22 and I was 128 out of 145 so I am professing huge love for all those other not great swimmers doing triathlons!  So I did not quite meet this goal.  (theme of the day - close close close but not quite there. 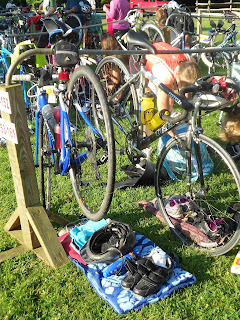 Transition oh how I don't love the time you take me.  I had set up my transition rather well, thanks for all the advice from blogging friends.  The transition took me 2:59.  Yay for being under 3 minutes.  Last year this was 3:34 so I made some progress.  I need to work on what to do to keep improving. 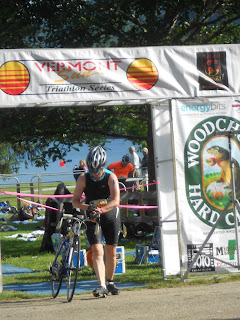 I am heading out on the bike. 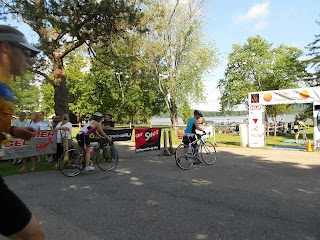 And 51 minutes later I'm back.

I was so ready for the bike.  Tired when I started out but I really wanted to better my time from my practice rides and from last year. The fastest I had done it when practicing was around 53 and change.  I found myself behind a guy in an aqua shirt that was a perfect biker for me to be behind. I ended up "with him" for the whole course. The distance lengthened but he was never out of my sight. I started passing people fairly early. When I started biking I was one of the last to start.  About 5 or 6 swimmers came out of the water after me.  When I run I can never see someone in the distance and catch up and pass.  On the bike it is a whole other story. I passed a lot of bikers and loved it. One woman passed me, I passed her back and then she was between me and aqua shirt guy. (I got way ahead of her on the run though.)  I got behind a car I couldn't pass who was behind bikers and that cost me some time. Then an ambulance came by and that slowed us down a bit more.  I felt I pushed and gave the bike all I had.  I love that I get a chance to practice on this course.  In the end I biked it in 51:11 which was 111/145. This was slightly better than my running.  Last year I rode it in 51:09 but with the ambulance and all we'll call it  a draw.  My pace was 16.4 which I am thrilled with.  When I went by my friends I heard my friends yell they missed me because I came in sooner than they expected plus the ambulance was right there. 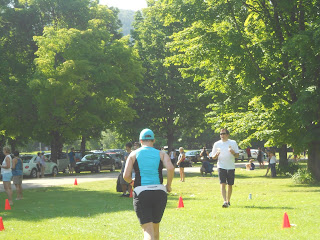 Heading out on the run. 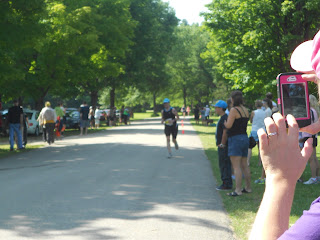 Very glad to be done. Yes, this is  fun but I'm ready to stop!

When I started out on the run I felt like I had nothing!  I was beat.  My Garmin was being whacky so I didn't know my pace but I didn't care that much.  I tried to give myself pick it up reminders but it was hard.  I could tell from my watch that I had started at the beginning of the race that I wasn't likely to beat last year's time without a major infusion of energy.  In the end my run was 30:33 with a  pace of 9:52.  My placement was 114/145.  Last year I was 29:55. So again, close but not quite.  I did love passing people with 29 or 35 or a younger age on their legs.  I passed a couple of "59" women too, more in my ballpark.

Overall I was 1:41:56 which got me 121/145.  Last year I was 1:40:58.  So I was about a minute slower.  Overall I was THRILLED with my race and had a ton of fun. So yes, Char, that goal was met.  I can't wait to do another tri which is a great feeling to have.  I am between my A and B goal and will probably do this tri again in August and see what happens then.  My next tri has different lengths swim and bike so it is hard to compare tris to tris unless they are the same one.  When  I first started doing these I wanted not to be last in the swim or the whole thing. I am certainly doing that and having a ton of fun so I need to stop thinking about that darn minute and just enjoy this new adventure in my life that is bringing me such fun!! 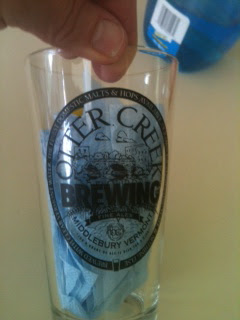 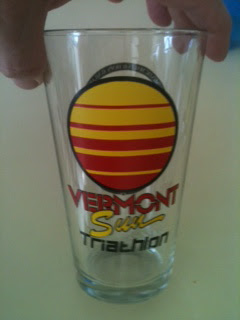 Yay! It was so much fun to watch. Are you doing anymore at Lake Dunmore this year?

You are amazing amazing. Do one near me. I want to watch!

Huge WOOT for sure! You are such a stud for getting out there and tri-ing. I don't even know WTH a breast stroke is. Ha! Congrats!

I'm gob-smacked that people can do the transition in such a short amount of time. That's got to take some serious practice and an ability to dress while wet that mere mortals surely don't possess. Some days it takes me a good couple of minutes to just put on my bra!

Congrats on the race! The course looks beautiful. Love the finishers glass.

Way to go!!!! Love the glass, what a practical prize! I love being a slow swimmer because it is so much fun to catch up to and pass people on the bike and run! Glad it went well :)

Woot! Love that feeling of being alive the adrenaline rush gives you.

Congrats on the AG win! That is awesome.

One more T1 tip, put your helmet on your handle bars upside down and backward so when you get to T1 you pick it up and flip it over and put it on your head. I put my sunglasses in on helmet too.

Congratulations, very well done! I think you finished in an awesome time.

Great report and fun to read.

Well done, that is great! Congrats on the age group win! You are tough for sure. Most young people can't match that ever. Rest well!

Congrats!! It makes me so happy to read about people who get such joy out of their races. I can tell you love doing these events so much.

Is this your first podium finish?

First is first! Even if there's nobody else in your AG.. (Can't win if you are home in bed!)

Wow. You rock. Congrats on another great race and a win - woot woot!

Great job! I am one of those 30 something's you would have passed LOL you work it girl!

Congrats for the 1st place and the triathlon.
A day to remember!
Beautiful pics.

I'm failing at keeping up with blogs during the summer, even my own. I love the excitement when you talk about tris. That's one of my someday goals, to do a "real" tri. A St. Louis friend of mine is fast, like winning the race fast, and having seen a couple videos his wife has taken I'm floored by how fast his transitions are. Crazy.

Congratulations on the AG win!! You rock!

"First" tri of the season...I like the sound of that!

Great job on the bike split. 16.4 is about the fastest I did last year for my olympic distance races.

I have no doubt you'll continue to increase those bike speeds with all the cycling you've been doing.

You're already a solid runner and swimming...well, I feel like I'm the only freak that loves swimming. Though, even I don't love tri swims.