Yep!  The goal I met for my solo bike ride in the triathlon was D. 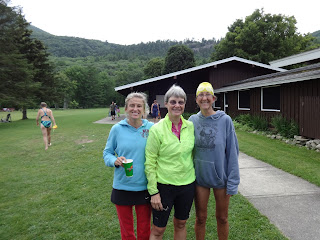 Before the race.  The weather had clearly changed from the previous week.

I did not get under 50 minutes, or under 52.  My time was slightly less than 2 minutes slower than when I rode this course following a swim.  I expected a better time and thought I rode well enough for a better time. I felt like I was pushing it. I passed a lot of people and only a few passed me.  I gave it my all.  So for today I will have to be happy with that and try again another day.  It was windy, but I didn't think it was windy enough to make a big difference.

But the three of us had a good time together.  The swimmer was a race virgin. She says she is the least competitive person out there but she is anxious to do it again another year!  I was riding sooner than usual because she came out of the water sooner than I would have (the wavy rough water) and transition was almost non existent. So I got to be in  a "pack" a lot more of the time. I like that as it seems to make me go faster.  (seems)  Our runner was very fast and really got us the place we got.  We were 4/6 relay teams. We beat the team behind us by one hundredth of a second.

The swimmer's mom, sister and niece came from 2 hours away to watch her.  Well to cheer her on. It's hard to know who is who in the water.  But I thought it was very sweet they all came.

I was 95 out of 130 bikers forgetting that most of them swam too! 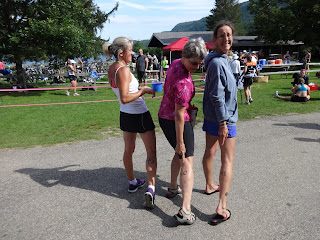 Pointing to our numbers on our legs because we are the bad ass older ladies!

So on to  a new tri this weekend.  I also think I felt a little let down I wasn't doing the whole thing which I didn't expect.  But I was racing and any day you're racing is a good day.

Weird that your time was more when you were feeling good and riding well. Wind can definitely make an impact. Hmm...same exact course? Like you said, any race day is a good day, but it still makes me curious.

You asked in the paddleboarding post about camera. My race camera is waterproof (well supposedly, but it's had issues lately after I didn't have a door closed all the way on it, but thank goodness for rice!), so I used it to take pictures. I traded off with my husband partway through, and he got a few pictures before falling into water and messing it up. Back into the bag of rice...

You always beat the most important goal - you always have a good time! No cupcakes this time round?

I'm with Char: a good time is the most important goal and you sure had one!

Of course, you could reach your goals considering your great motivation.

Well done to the whole team! I think you have more adrenaline pumping after the swim and that boosts your bike and run. I've only done running relays and the team experience is also fun and different. But I am more of a solo effort person. My wife wants me to join her for a bike race in November. I'm still thinking about it. It actually falls well in my running plan so who knows...

I'm amazed at the sweatshirts at the start! If only it'd get that cool in the mornings down here.
Glad you had a good time and are looking forward to your upcoming solo tri!

I agree with your last sentence.

Sounds like you guys had fun racing together. I've always thought it would be fun to relay a tri, but need to find a team. Maybe you were more warmed up after the swim leg last time? Great job!

Sounds like a great way to enjoy sport with friends. Your 'older ladies' are definitely badass!

Awesome! Tell Andrea I said Hello. Tonight my mom said she might want to do a "triathalon like Andrea", next year :)

At least you had fun. That is the most important thing by far.

Sometimes it happens. The first sprint tri i did on my road bike when I first got it, my bike split was slower than when I road my dad's mountain bike from the 90's!

Having fun and enjoying yourself is the most important part. THere will be other races to crush the bike portion of.