Before the Shipyard Half

Two friends went with me to Maine for my half marathon. We left early Saturday and got back late Sunday. We all agreed that we packed a lot into the short time we had and a good time was had by all.

During the drive over we caught up on work gossip (we all work together) and family lives.  We stopped for breakfast, encountered no bad traffic (the whole weekend) and arrived in plenty of time in Portland for packet pick up.  I found a new running store which is right near the Whole Foods store we visit often since we don't have one in Vermont.

The race t shirts were way small but they are sending us a new one that will fit.  They apologized a ton for the sizing and are doing what is needed to make it right. A class act.  I will give mine to a friend who is smaller - much - than I am and always covets my race shirts.  She really covets my medals but no deal there.

Then we checked in to the hotel - no problem that we were early. All weekend I kept telling them it was up to them what we did because so much of the time was taken up with my race.  We all agreed a beach visit would be nice and headed to Crescent Beach State Park.  There was plenty of parking although it was expensive ($6.50) a piece.  But it was heavenly. It wasn't too hot, in fact I was a little cool. We read and talked and MJ napped.  Heaven! 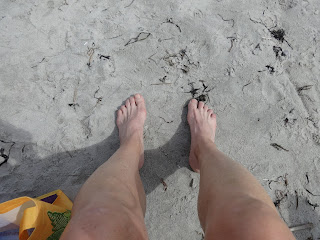 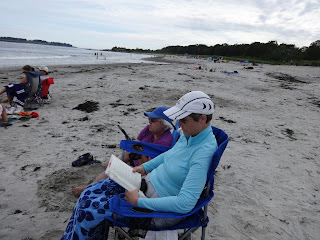 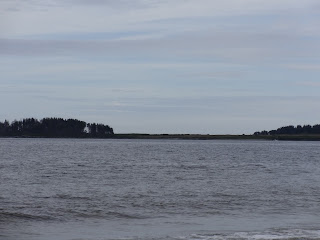 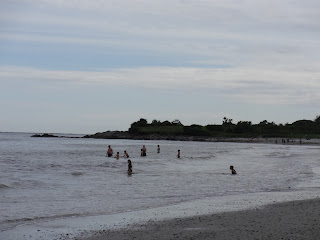 Next up was the big decision of where to eat supper.  We ended up at the Lobster Shack which wasn't crowded (where was everyone?) and wonderful.  I always get a lobster roll so no surprise there.  We split a whoopie pie which was to die for.  But the best thing was the view and sound of the ocean as we  were eating.  Pure delight. 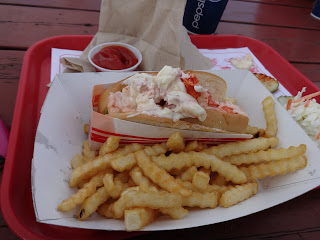 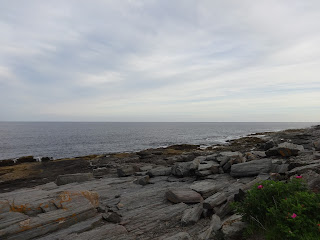 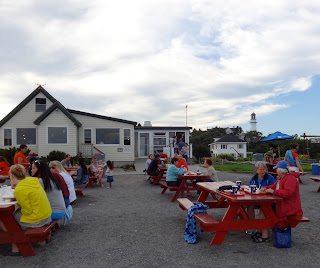 Then we goofed around and sat in the rock chair in front of the light house before making one more stop..... 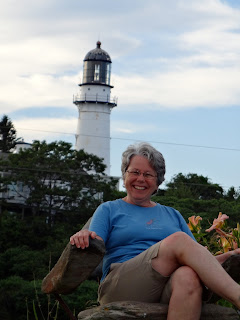 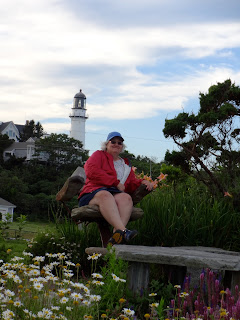 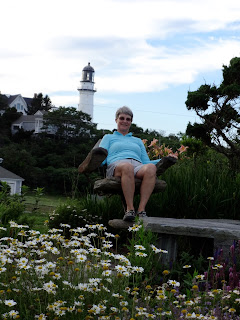 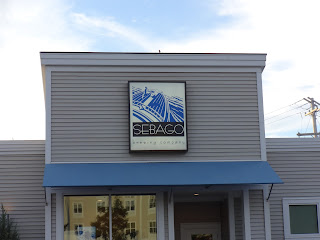 Looks beautiful! I can't wait to venture to this part of the country one day.

You got a lobster roll? I'm so surprised.

Sounds like a nice relaxing trip! It's always fun to catch up with friends.

Lovely trip although the beach does look a bit too cool for me :)

It's always great to have time for some relaxing before an away race. Ocean views are super!

yay maine! im so glad you had a great time leading up to the race... im nervous to see what your race was like hearing and seeing how other people fared (we were out there cheering with cowbells after doing a long run prior to the race start... it was a hot one!) hope you had a good race though, looking forward to reading your recap.

Maine looks great...haven't been in years!

Ah! You are making me so jealous! That is the area I grew up. That is pretty awesome that the race is so considerate to send out new shirts! I've never heard of that and I've received several ill-fitting shirts. Can't wait to hear about the race.

The lobster roll looks yum! Can't wait to read about the race.

I love this post... as a former sailor I like to hear about the sound of the ocean and the lighthouses. Good luck on the race.

So much fun! It's been 2 years since I was last in Maine. Need to go back!

You know I love Maine. I've only been to Portland a few times. Maybe we'll go when we go in October.