1. Two steps forward.......one step back.  But that is much better than the reverse. My run on Monday set me back some.  It wasn't the distance......I had been farther on Saturday but the speed. And I use that word loosely.  But even though it wasn't fast in many worlds it was too fast for me right now. And I sort of knew it as I was running but not completely as I ignored it. I definitely could tell later I had made a bad choice to keep going at that pace without walking breaks.  Today (after a day of rest) I did the same mileage but slower and with walk breaks and feel just fine.  I'd rather go slower than not run at all.  Yesterday I swam and tomorrow I hope it warms up enough to bike later in the day after my morning swim!

2. I am still undecided what to do about my half marathon next weekend.  I bet you are thinking that it is easy. That of course I shouldn't do it.  If I do it it will be running and walking. I will be slow. But there are two waves, two hours apart. I am in the first wave so I would not be holding up the volunteers.  At this point I am not counting on doing it, but I'm not ruling it out either. 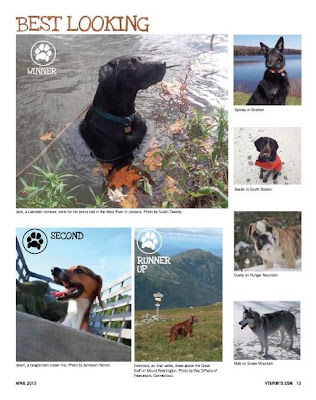 3.  Jaxon won second best looking dog in the Vermont Sports magazine.  I am sure the winner was the editor's dog or something as Jaxon was clearly the best looking. They also included an adorable picture of him to introduce the whole dog section.

4. My March stats are crazy. If you missed all my March posts I think you'd pick up on the whole injury thing with all the swimming and so little running!


Completely random/non running related: Does anyone else have any random soothing sounds?  Of course there is the sound of the fan at night which can be it's own white noise to sleep to.  Although last week when I had it on for the first time in months it kept me awake. Another truly random noise I like is the dishwasher.  I often make a point of putting it on before I go to bed because  I feel soothed by it.  Strange but true.  It isn't because I don't like doing dishes so I like the sound of it. I don't mind doing dishes at all.  Much better than a sink of dirty dishes.  Okay this has nothing to do with anything. Move on!

I registered for a fall triathlon I have been thinking about for awhile......the one with clam chowder and whoopie pies!
Posted by ajh at 9:30 PM

There was definite favouritism in the selection of best looking dog. I'd say nepotism for sure. And we're not biased at all.

Soothing sounds? Early in the morning, when I am still curled up in bed and I hear Steve's shower running. Also, the furnace coming on at night in the winter.

I'd sign up for a tri in the fall with Whoopie pies, too! :)

Two hours apart for the waves? That's a lot...I think you'd be fine if you took the half slowly.

You know me. I ran/walked a half coming off an injury. I think you will too but you have to make yourself WALK or you will be set back.

Yay for Jaxon! I know I would probably have started that half...but very slowly indeed. I listen to the bubbling of the fish tank in our bedroom. I grew up with that in my room and love the sound.

I actually really like the sound of my dryer. And my cats purring :)

Yeah, it was one step back, but I don't think you knew that the pace was going to do that. In all, I think you are taking a smart approach to your recovery. As for the half... if you do it I believe the walk / run thing is the right thing to do. I am usually a meathead, but you have inspired me to be smarter in the things I do with sports injuries. Its been 4 days since my last run. The good news is that I am biking and swimming more.

Glad you are making progress! If you want to do the half marathon, do it but take it easy like you are planning. You might even find it fun to run without pushing too hard.

I'd do the half-marathon and run walk. I mean, if Jeff Galloway can do it, we can all do it, no?
Jaxon is so cute!
I use a clean air allergy machine when I sleep and it makes the most soothing white noise. It's to the point that I can't sleep without it. I totally love it. It's one of my favorite things, plus it really helps my allergies, too.