Saturday
I went 10 miles with the run 10 minutes, walk 1 minute method. It worked pretty well EXCEPT even though I am not aware I am doing it I am changing my gait.  Less than 3 miles in, my hip began to bother me.  After a half mile or so it stopped but it has continued to bother me since I got home.  What a pain!  I am improving daily and now something else goes wrong!  Maddening.

It was quite cold and I had been planning to also bike. But since I had a hard time even staying warm while running I scratched that idea.  This run took me forever with some unpleasant bathroom problems in the middle. I haven't missed that!

It was nice to go farther on my feet and in spite of the cold it was a beautiful day.  I must admit the ten miles tired me out.  Can I really go another 3 next weekend?  I think I can but do I want to?  Should I? 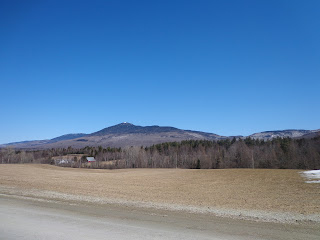 There's my mountain. It's great to see it again.

Then on Sunday I decided to bike.  I am still using my Hybrid as the roads are muddy and I am a lot little scared to get back in those clipless pedals.  I did a loop near my home that I like and pretty much only do on my hybrid as so much of it is on dirt roads.  It goes, down, flat, up,up, up, up, and then down. At first my hip hurt and I thought Man it is hurting even on my bike!  But before too long I had pedaled the pain away.  I felt like I was going so slow and was so out of shape. I talked to my husband about it later. I lost a lot of fitness during my non running/ non biking time with the ankle sprain. But everyone keeps talking about how windy it was Sunday.  Everyone!  So maybe at least a little of my problem was the wind. But not all of it! 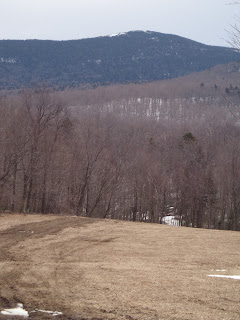 Same mountain seen from a different point -
after some climbing! 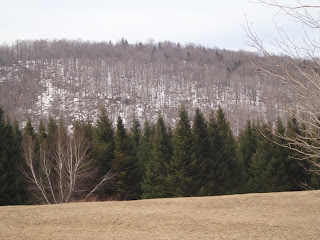 There's still some snow around. 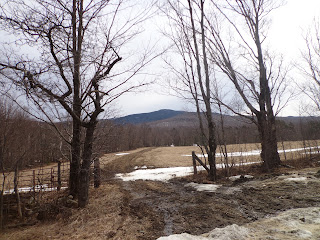 Monday was supposed to be the nicest day this week and I so badly wanted to ride my bike after work. I had very limited time though as I was meeting some out of state friends for dinner after a work meeting.  So I got up early and went to the gym to get my run done.  Can I say this was a great run, the best run yet!!!  I did it on the treadmill and did the continuous 4 + miles at a faster pace than I have been doing with no breaks. And it felt great during and after!  Just a week ago this same attempt set me back.  Yay! Then after school I left my meeting by 4, raced home, got in 11 gorgeous miles on my road bike with those clipless pedals, didn't feel quite so out of shape and had just a great time!  Yay for Mondays some of the time!

The not so good runs and rides sure make the good ones feel that much better! Way to get back out on that road bike. My poor road bike is languishing in our basement on my trainer while the cross and mountain bikes are getting all the love. I'm thinking about doing a duathlon at the end of the month though, so maybe it'll get out there again.

Ooooooh - I am feeling your bathroom break pain - not fun AT ALL!!! So glad you bounced back with a good run AND a good ride. Lately, the mountain bike has been bringing me to my happier place. Are you still in the Hokas??? The fabric got dry and brittle on my pair, creating several small holes on each shoe on the medial side where the upper fabric attached to the midsole. They had just over 500 miles on them (and the cush still felt great!) and Hoka replaced them, no questions asked! Their customer service was awesome and cemented my continued patronage to their company. :-)

So good to hear that there was a happy ending to this story :). Good runs are heaven and it was time the running Gods finally smiled down on you. Followed by a great ride. Nothing finer.

So good to hear that there was a happy ending to this story :). Good runs are heaven and it was time the running Gods finally smiled down on you. Followed by a great ride. Nothing finer.

I hate those uncomfortable and poorly timed bathroom issues. They seem to happen more the older I get.

Your winter seems to be lasting forever. It has to get better soon, surely! At least your running's getting better.

Good news. Wind has also been a problem here. The forcast for my marathon is looking fine, apart from possible strong winds! Hope your fitness is completely returned soon.

We have had such winds here too. You sound pretty fit to me. Even in my healthy days I couldn't run two days in a row. I had a lousy run yesterday with 2 days off. Oh well, a bad run is better than no run.

Good stuff! I always tell myself during the bad runs that there will be a great one soon. It helps and they always come around to boost me. Great to see your training going well.

I wouldn't run the half next weekend but I'm not you, you are much more hardcore than me when it comes to running :)

Next weekend is going to be great here too and I can't wait to run in my capris again for the first time this year.