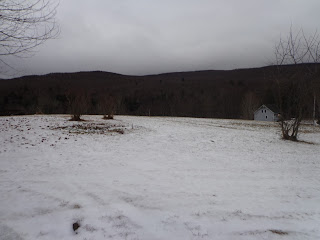 So I decide to run it. This is probably not a surprise to most of you as you know I love to race. I did question my decision a couple of times.  The first time was as I was leaving my yard looking at the snow that we got yesterday on a miserable day of sleet, freezing rain and snow.  It could not have felt much colder. When I stepped out on my porch this morning it did not feel too bad so I wore capris. I brought both a fleece headband and a baseball cap (thank God) and wore two layers on top instead of the one I considered.  Once I was racing it was fine but it was so cold at the start. This is a point to point race so you are bussed to the start and have no car to huddle in.  Most people had pants on and I am pretty much always cold so I wasn't sure why I didn't have pants on. I wasn't trying to be streamlined for a wicked fast time.  But finally it was time to line up. I was never so glad to start running. 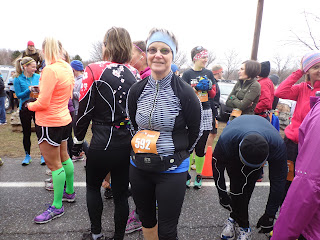 Don't let the smile fool you. I was feeling pretty miserable. 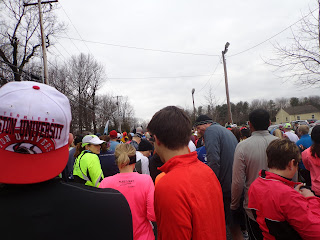 We head north first and are running near Lake Champlain.  I was still pretty cold at this point and can't say I was enjoying the scenery as much as I would have on a more balmy day. But it did feel good to be racing and running. My plan was to run 10 minutes and walk 1.  I did wear my Garmin - many of you suggested I leave it at home but  I needed it for this. I really didn't focus on my time. There was no point.  I could feel I was going slower.  My ankle didn't hurt but I just don't have full mobility of my foot.  I didn't walk until some time after 2 miles but after that I did walk.  It was never (almost) before 10 minutes but sometimes after.  I found myself looking forward to it and it made the 13 miles bearable. knowing I would be getting regular walk breaks. 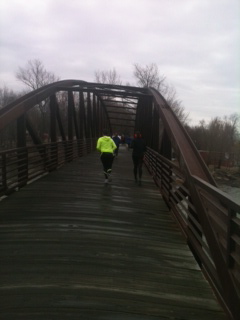 I got to the bike bridge and the crowd had already thinned a lot. I was not with the number of people I usually am but that was fine.  There were three girls with fun signs on the bridge and I stopped to get my picture taken with one. 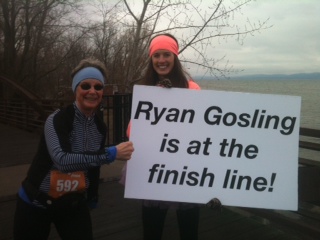 I thought once I got to the end I would post this pic on Facebook. I spent the next few miles planning several clever captions to go with it, none of which I remembered when I was finished.  The last several miles were painful for various reasons. I was quite tired.  I mean I trained for this a whole three weeks, why wouldn't I be tired?  I had to keep reminding myself of this. When I got to Mile 11 the time I hit there, I was done last year.  Oh well.  It's hard not to compare to past years though even though of course I was much slower.  The worst part was that I had some digestive issues and I really needed a port a let. There were none to be found.  Apparently that is part of the no frills. Must be I haven't had this problem before as it is the first year I have noticed this.  I will mention it in my comments if they email and ask us which I think they do.  So I kept looking and yearning for that bathroom opportunity that never came.  This slowed me down as much as my energy.  I also reminded myself to be careful as I was more and more tired. One place I stopped to see if the bathroom was open and when I went back to the race course I rather abruptly stepped off the curb. Not good!  This is when those injuries can happen.  The last two miles are awful because you go past the finish and other runner finishing to a neighborhood with the biggest hill of the race. When I got done  truthfully I could only think of getting to that bathroom. So I am walking up and what happens.........a train goes by and I had to wait and wait and wait!
Once I got my food I headed to Jameson's but for awhile he wasn't there.  I changed my clothes and plopped on his couch and ate.  Then he came and Jaxon snuggled with me some.  I didn't get off the couch for 3 hours!  I had no motivation and was EXHAUSTED!  I was also freezing and huddled under two blankets the whole time I was there. 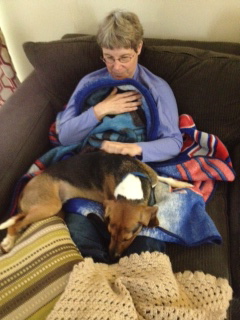 I got back home and everything feels fine although my energy is still not there.  But overall I am glad I made the choice I did and raced this half.  It gave me a time to beat in my next half in 3 weeks! 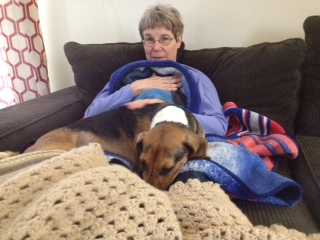 Plus I just love to race.

Well, zippiddy do. You done it!

Props for you for doing it even though it was cold and grey out. We don't need it THAT cold to race.

on to the next!

Knew you would do it. Too bad it wasn't a nice day so it would have been enjoyable to be outdoors. The next one will be better, right?

Glad you raced and had fun! Looks like you enjoyed relaxing afterward as well.

Nowhere to go from here but up for the next race, right? You did it and that's something to be proud of. Too bad Ryan didn't end up snuggling on the couch with ya after though! ;). Nice job, girl!

Wow, that sounds like it was tough at the end! But you did it, and everything that comes after it will feel a lot easier (and hopefully warmer)!

Great to hear about your decision :) What a nice photo of you and other runners before the race. Enjoy the rest!

So good to hear you survived. But what is it with race directors and trains. C'mon people!

Glad you survived. We got caught behind the train last year too, Travis was on the other side.

You crazy girl. :) That sounds pretty miserable between the cold and no bathrooms? Boo! Congratulations on pushing through and finishing. So glad your body came through feeling ok even though super tired. Way to go!

Glad you made it through the race! It looks really cold in your pictures. I love those pics at the end with Jaxon snuggling with you. I bet he helped warm you up!

nope not surprised that you did it, hope the rest of recovery goes well!!

I love the coming up with captions in your head, that is so what I do during runs and then yes...I'm like wait what was that I thought of it was so clever and witty!

I'm still impressed by anyone who can complete a half as I doubt I'll ever even attempt one! That's my friend Sarah in the lime green socks!

You're a rockstar to me! Not many people would have been brave enough (including me) to do that half after your injury and path to recovery.

Very proud of you Andrea. And a hug from Jaxxon afterwards is the best there is, isn't it?

Glad you toughed it out! I lol'd at the thinking of witty things and then forgetting what you had thought of. Happens to me all the time - on runs, in the shower...