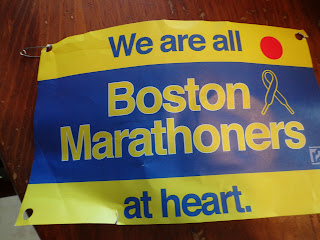 Today there was two races in Burlington to raise money for the Boston victims and to honor everyone involved. I was able to get to the second one and Jameson went with me.  It was a cold day with an unbelievably brutal wind but there was a good sized crowd.  Over $10,000 was raised.  The man who organized the event had intended to have a party for himself as he would have completed the Boston Marathon.  He was stopped about 3/4 of a mile from the finish.  He decided to cancel the party and do this instead. I doubt he realized what a response it would have. 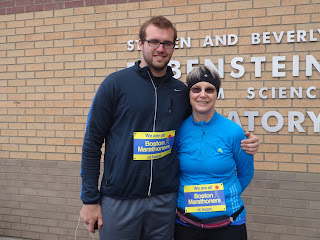 I had thought maybe I would run more than the 5K distance but it was too cold after standing around and waiting for the run to start. I was glad Jameson went with me as it is easier to be freezing and miserable while waiting with someone!  The run didn't start until all had had a chance to register.  Then they did waves of 40 or so. It was very informal - an out and back to North Beach. 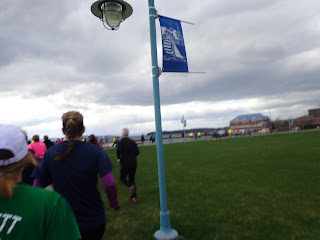 I tried to get a picture to show the wind but couldn't do so. But believe me it was windy! In spite of that I was glad to be able to help in even a small way.  I'm glad the suspects are caught/dead but can't stop thinking of all the victims have yet to face.  It was good to be a part of the running community showing love and solidarity.  We won't be stopped from doing what we love. 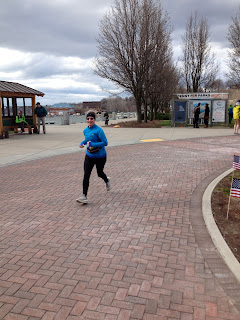 I was listening to someone to do with the Boston marathon on a podcast and he was saying that he was touched not so much with people raising money, but with the solidarity of feeling shown by such events and tributes.

I know a lot of runners in today's London marathon (which I'm watching on tv now) will have Boston in mind as they run, and especially as they cross the finish line.

It was sooo windy. I ran at home in the morning. Have a great trip!

What a great event for such social cause!
This week I have been following the good job of the Massachusetts State Police. After that tragic thing Boston now have a victory.

It looks really cold in the pics. No sun and everyone wearing their warm gear. So nice that you could run with Jameson.

Wonderful tribute! Our weather is almost always similar, and I know the wind you're speaking of!

What a fundraiser!! I truly enjoyed hearing about all various Boston events/fundraisers/tribute tees (bought 2 myself, who can resist more tshirts?)