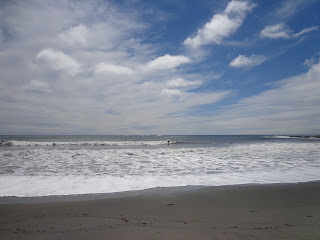 Lately I've had all these posts about biking in Maine by the ocean and how wonderful it is.  All true! 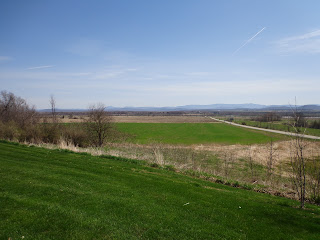 One of my favorite spots on this ride. 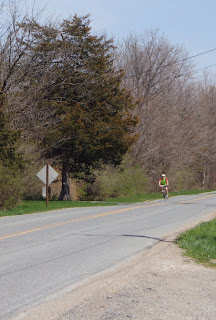 Mr. AJH coming up for his first snack.


But now I'm back in Vermont and biking around here isn't too shabby either.  The weekend weather was gorgeous and I actually got Mr. AJH for a ride on his new bike.  He has declined all other offers which he may have regretted as this one was a rather long ride compared to what the others would have been.  I did cut it a little short but not much so for his first ride of the season he rode 45 miles! The poor man wanted a snack at 10 miles and like a kid kept asking how far we had gone. But he hung in there and felt quite good about completing it all with no whining! 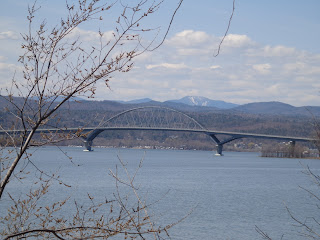 The "new" Lake Champlain bridge. We rode over it because
it was there and my husband hadn't before. Riding over
it and staying in the bike lane near the rail is a little
creepy and I unclipped for the whole way. 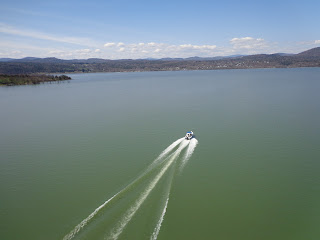 From the top of the bridge. 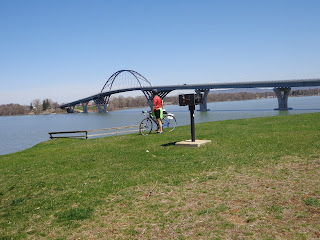 On the New York side for a snack stop. Snacks were
pretty important this ride.


I was doing a route I've done many times with my friend, Cathy, but I've never done it without her and wasn't sure I would know the whole way.  That didn't seem to be a problem.  The only problem I can think of is the continuing wind. The good thing is this ride went in every direction so at least some of the time it was helping.  I wasn't used to the heat and that took me by surprise but I'm not complaining about the heat. (yet)

Last week I rode a total of 186 miles. I am guessing that is a weekly high for me and also guessing it will stay the weekly high for quite some time.  Due to all those biking miles I had a GREAT week last week!

I got out tonight for a quick 10 miles near my house and I must be tired because that amount seemed just fine. I also ran.  The doubles seem to be back as triathlon season approaches.

I realized today as I headed back to work that if only they would pay me to ride, bike and swim life would be so much easier as my job interferes with my passion.  Somehow I don't think that's going to happen and who knows.  Maybe I wouldn't appreciate biking in Maine so much if it was something I could do whenever I wanted.  Okay off on a rambling thread here.  Time to stop.

Now that you know how close the bridge is to my house you can bike to my house!

Always love your Vermont photos. One day I swear I will make it out there, such a different world than mine. Glad you're enjoying some great Springtime weather. We are here, too...but more snow on Wed they say. Bleh.

Your bike miles are WAY higher than mine! You're like a fitness machine...if only I had your discipline!

All of your pictures are beautiful. I'm jealous that you got Mr. AJH out for a ride. Mr. SK is not so accommodating (and the "are we there yet" talk starts at about 2 miles!), but I've got a little bike partner in training, which is pretty exciting. :)

Have a great week!

THanks for taking me over the bridge! Beautiful!

I definitely think there should be a job that will pay middle aged women to exercise. I'd give up my day job in a flash.

As an outsider I always think you have some of the best biking and running spots I see in blog world. I really hope one day I can come and see first hand what Vermont is all about.

Just beautiful - next year I want to do that NY-VT Bridge 5k (I am away this year.)

I would so love to come out and ride with you some day! What beautiful and gorgeous scenery you have. You are very lucky :)

I love Vermont too, the pics are always so beautiful.

Had to laugh at your husband. Mine does the same when we go out for a walk with Bella together: how far did we go and how far do we still have to go :)

Thank goodness there is some great weather around now - perfect for biking!

I *know* I always say this, but I LOVE your pictures! You are talented! You should add photograhphy to your list of paying jobs :)
Congrats on the big mileage week! My butt hurts just from seeing that number! lol