I Pod or I Phone While Running?

I have always loved my Ipod.  But I have lost it - again.  My car - which I love except for this- has a very very small space between the front seat and the console. If you drop something there it disappears, sometimes for a long time. It's the Bermuda Triangle of cars. When I went to watch Emily run the Lake Placid Ironman we lost the key to our cabin.  We looked and looked but no luck. About a year later it showed up on my car floor. I guess it eventually found it's way from under the seat.  I lost my Ipod once before and it was nowhere to be seen. Nowhere. But I used a ruler to eventually work it out of no mans's land. Well it has happened again and I have looked several times, used a ruler and I JUST CAN"T FIND IT!  I was ready to run out and buy a new one - I use my Ipod daily - when I thought about my phone. I know many people use only their phone.  So I talked to my son and thought I would give it a try. I won't tell you how long it took me just to figure a few things out.  But I'll try it for a week and see. I have some of my music loaded (not much) and my podcasts. When I ride in my car I listen to podcasts.  Now I am wondering if I will be able to listen to podcasts with the phone plugged in and answer it? Reach it?  I am sure these are laughable questions but that's how I roll.

But my main question is what do you use for music when you work out?  If you use the phone is it not too bulky?

Today I did a workout with no Ipod and thought it would be awful but I actually had a great workout!

Plus I couldn't get on my treadmill and I used a new treadmill at my gym and I liked it a lot. So I now have 3 treadmills I like as there are two of these new ones.

I went to the broken wrist doctor today ( too tired to think of the correct term) because my wrist has continued to bother me.  As recently as two weeks ago I winced twice when I picked something up.  Two odd things - it is the side of my wrist that I didn't break.  And today we couldn't make it hurt.  The thing that causes it to hurt the most is opening a jar.  Plus it hurts every morning when I wake up until I flex it some.  The doctor did not think I was a  nut case, at least she appeared not to.  More xrays were taken and things looked fine which is of course good news. She wants to see me again in a few months.  She wanted to know if I had any tris coming up. She must think I am really hard core as it is January in Vermont and there is snow on the ground and ice in the lakes. 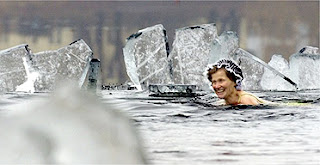 If I run fast I use the little ipod. When I go slow I love to listen to podcasts, and I download them on my phone.

I've got a Sony Walkman MP3 which is basically just a headset. It's great. And what's even better is I won it. No money exchanged hands for me to enjoy Michael Buble while I'm out pounding the pavement.

I used to use my iPhone, but I have a new one that's not broken (yet!) and I don't want to take chances with it. The old one I carried in a Baggie in my shirt bc I didn't want to ruin it with sweat and after the screen shattered I had to keep it in the case and couldn't fit it in the armband.

When I was using it, though, it did the job just fine. Now I use my $50 shuffle that I can live without if it breaks. :)

I do a lot of running with no music but when I listen to music I use the $50 iPod shuffle like Kate. To carry my phone I use an amphipod belt that keeps the phone from bouncing around at all. Your blog isn't letting me paste the link so email me if you want it.

I had a car like that some years ago. Very frustrating sometimes. I don't run with music so don't own any music playing device. I carry my cell phone with me during long races but mainly for emergency purposes.

No music for me when I run or cycle.

I have run without music but recently started up with it and I like it. I use my tiny iPod nano. I just got an iPhone but haven't used it for music yet. I should try it.

I mostly go music-less. But when I do use music, just a small old ipod shuffle (little square that clips on) for me.

I hardly ever run outside with music but when I do I use my tiny ipod nano (about the same size as a shuffle). For many years I only had a large Dell Jukebox mp3 player that is bigger than my droid cell phone so I rarely ran with it. It was way too bulky for that!
My new gym has ipod/iphone connectors on all the equipment so I can charge it while I'm listening and working out. I either listen to music or one of the tvs.
I like that your doc thought you might be doing tris in January!

I rarely listen to music, but on long runs I'll often listen to a podcast. If I do take music, it's fast and poppy, and I usually end up running too fast!

That's too bad about your Ipod - hope it turns up soon!
I use a very old, low tech Mp3 player. It's very small and has a clip that I attach to my waistband. I've had it forever and it works for me. I don't know what I'll do when it finally expires, though...

What? No January tris for you in VT? I was a Shuffle girl but finally switched to my phone. It is heavy to run with and bounced until I got the Velcro arm thing. That works just fine. I do like having my phone/tunes/camera all in one.

I don't often listen to music while running, however, when I do I usually use my little ipod that I can clip to the back of my visor. I do sometimes listen to audio books while running. Normally I use my phone for that. BTW, when I use my phone I use a bluetooth (wireless) headset. It really make a difference.

I hope the wrist gets better soon.

I always run with no music, because I need to listen everything about me, every noise could notice us about a danger such as dogs, cars, etc.
Have a nice Sunday!

I use a mini-ipod shuffle for speed or most of my runs. I use an ipod nano for podcasts and then I still always carry my phone on long runs in a spi-belt! I don't run marathons with music but I love it in a 5K! I have one of those weird cars too!!! I found 2 Visa card cell-phone rebates that I had lost down there after 9 months!!

It's a cost/durability thing. iPods are cheaper and less likely to break down if dropped, sweat on, jostled around, etc.

I carry my phone when I run outside, but I don't actually have any music on it. I really only use my iPod for indoor workouts and then I like my nano because it is small and clips to my shirt.

Glad you were able to find it though!