How Many Is Too Many?

How many is too many triathlons for one season?

I realize many factors weigh in to this decision........costs, time, date, family, other races, life in general.

Tris are definitely more expensive than running races but I suspect in my neck of the woods they are not as bad as some other spots.  So cost is a factor but unless I go completely crazy not prohibitive.

Schedules......I don't want to plan my whole summer around tris.  I want to do other races (maybe) and visit friends (definitely) and have time for family and friends at home.  So how many is too many?

And what ones do I choose?  I think I want to go back to the three I did last summer.  I was originally going to do of the Lake Dunmore series pre broken wrist.  This summer they are offering four sprints (the only tris I am considering.)  I love this series, I can practice all of the race as often as I want and it is a great spot to do all three disciplines!  I would like to do at least 2 of these.

I am already registered for Mascoma Man which was my first tri last year. This year it is on July 27.  The cost is $70.00.

I want to do the Circle Tri again this year which was my third tri of the season last year.  It is on Labor Day weekend on Sept. 1. It is $65.00.

Here is a new race I want to do but it is the following weekend in Maine.  It is called the Pumpkin Man Triathlon and even though it is Maine near the seacoast it is not in the ocean. Huge win!  It advertises clam chowder and whoopie pies to eat!!! Even more of a huge win. How could I not do this one?  I looked at it last year but it was full.  This one costs $85.00 and has 550 racers so it would be the largest tri I have been in.

There was also another tri in NH I liked the looks of called Give Peace a Tri. I was going to do that one pre broken wrist.  There is nothing new yet for 2013.  This was $43.00 at it's most expensive point.

Plus I joined whatever the triathlon organization is so I don't have to add on to my race fee each time. So I need to do enough tris to make that fee worthwhile!

And of course I may yet see other tris within driving distance I liked the looks of.  So I am thinking I may end up doing 6 - 8 triathlons and that doesn't sound so bad.  I will not say they are just sprints because when you are talking triathlons that include swimming just doesn't enter into it. So I guess through the writing of this post I am deciding that 6-8 triathlons are not too many! 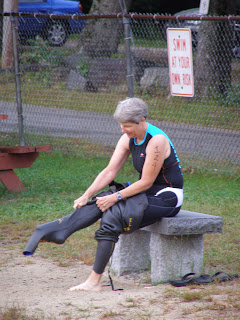 Can I really put that wet suit on that many
more times and make myself get in the water
and do my version of swimming?

For me the answer would be one. But for you? I think with your level of enthusiasm at least 12.

Sounds like a great season of racing ahead of you! Doesn't sound to me that your goal of 6-8 races is too high if spaced out well enough to recover from each one before heading into the next. Good luck and happy training!!!

You can totally do it! You need to get as much use as possible out if that wetsuit! :) It's only responsible. Thrifty, even.

It's an individual thing. If you want to train for a specific A race, then you have to get the body trained properly. But if you just want to have a good time and enjoy it, then the sky's the limit. :)

I agree with Jill. If you are having fun, do as many as you want and can afford. If you have a race you want to crush, you need to adjust your training to peak for that race and let the other races be training days. It's tough to spend money for a training day for me.

Looking forward to following your adventure again this year!

Do all you want! As long as you are enjoying it you are not doing too many.

You can be adequately trained for that you've planned. Enjoy!

It sounds like you have a good idea of how many you'll be doing. :)
The one I did last year cost $35 I think. I looked at it this morning to see but I can't find the registration info. I found a different one at the same location for Sept and it was $152! No thanks.

I would say you are addicted. Sounds fine to me but than again I would do a 5k every weekend. So it's seems ok as long you are healthy & have time to train for any longer races.

Like you said, there are many factors. So many, that I think my head just exploded.

I'm going to come watch you in a tri this year, Lake Dunmore??

It all depends on the person, but I also think it depends on your goals for the season, the more you race, the less you actually focus on a real "A race"

Sprint tri's are kinda like 5ks...as long as you're not racing all out every time you could do one every weekend. The longer distances, even Olympics, I wouldn't recommend every weekend but you could easily do 2 a month of those. Half irons take a LOT more energy and I wouldn't recommend more than one or two a year. And the Ironman, I think people that do IM's are crazy...wait, I just called myself crazy. Anyway, I could NOT imagine doing more than one of those a year...though I know a girl who did as many as 10! NUTSO!