Le Tour de Farm exceeded all expectations.  We were told to bring or buy a lunch because the samples would be small. Well, they weren't and they were delicious. We made it the entire 30 miles and yes I am tired but not dead. I will absolutely go back next year. 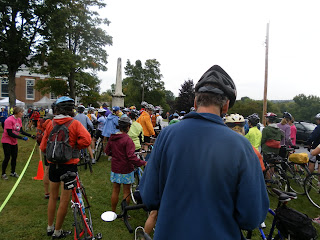 Waiting for our wave to go

The day started out rainy but before we had even started to ride it had stopped.  They started the 30 mile riders in waves. I was in the second wave. I don't know how many there were.  We started up a hill right away but it wasn't too long before the first farm stop. When I saw maple candies I knew it was going to be a good day!  There were maple walnuts, maple candies and several grades of maple syrup to sample! 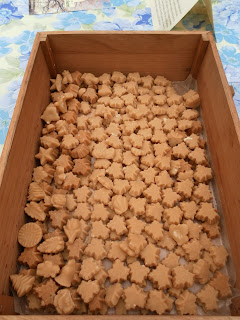 Yum!
Off we went again.  This time we turned onto a dirt road and went down!  The next farm stop had hard boiled eggs (organic) and organic honey to sample.  There were chickens wandering all over the yard. 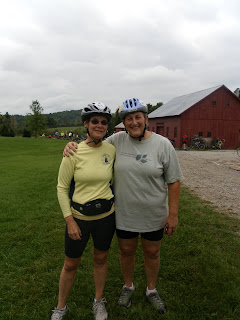 With a good friend I used to work with
The third stop was my favorite.  There were three types of cooked squash, pork soup (I passed on this but comments were good) and cookies. And they encouraged us to try each kind.  I tried all the squash so of course I had to try all the cookies! I liked the pumpkin chocolate chip the best. 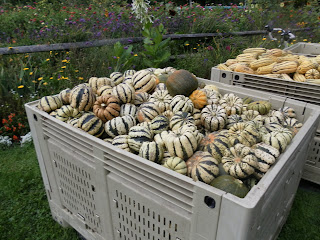 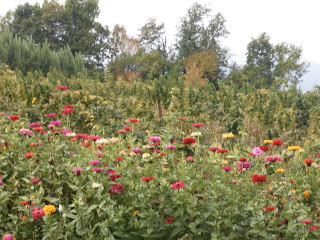 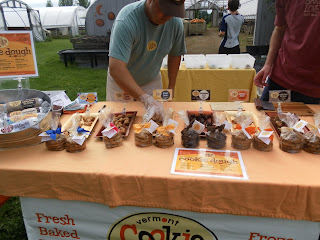 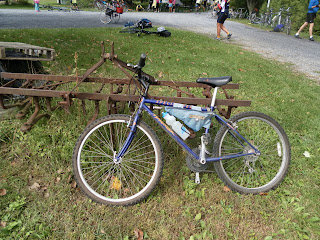 I thought I parked my bike in just the right spot for a farm tour!
After this stop it was a longer way to the next one. We rode through some apple orchards on the way and parted with the 10 milers who looped back toward town.  Once we got there a friend informed me the cider doughnuts at this stop were why one did this ride.  These were a purchase not a sample but with a recommendation like that I had to buy one!  Apples and cider were the samples.  There was a band playing and probably the longest line we saw all day.  And yes the doughnuts were great! 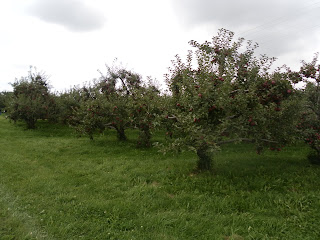 Through the apple orchards
After this stop we separated from the 25 milers. We got some glimpses of Lake Champlain along some very pretty but hilly roads.  Then we were in Orwell where we sampled turkey cooked a couple of ways and the best ice cream ever. I am not a chocolate ice cream person and this was just unbelievable. 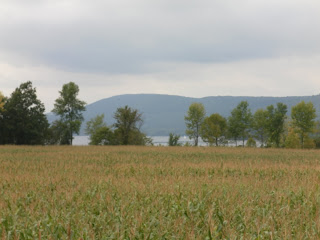 A glimpse of Lake Champlain 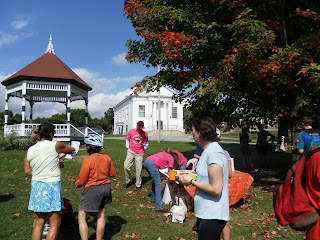 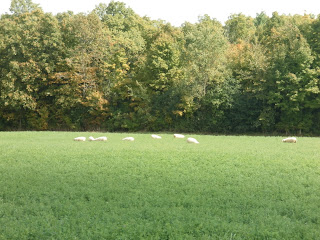 Riding by some sheep 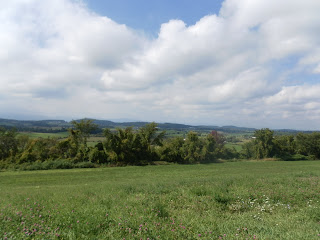 Waiting for the others on the way to the winery, a beautiful spot
When we did reach the winery it was up a hill and around a corner or two just to get to it.  This was one stop where they truthfully said, "Have as much as you want!"  Maybe not a great idea when you are riding a bike! 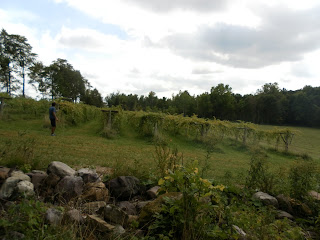 Some of the vines 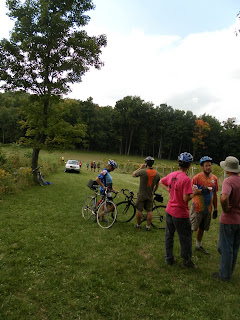 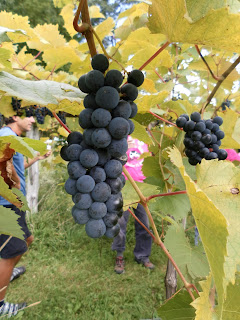 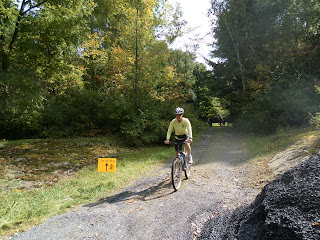 Leaving the winery
After we left the winery we had several more hills ahead of us but first we stopped for liquid yogurt where they again wanted us to sample all of the flavors. Darn!  Okay I can to be polite. They also had some calves and a cow to be photographed with. I got talked into doing it.  Had to be because it was the stop after the winery! 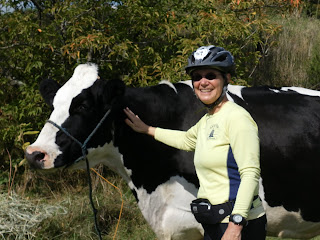 Yeah, I am a dork petting a cow. Who talked me into this?
Then we went about 4-5 more miles back to the beginning where there was an apple festival going on with many local products for sale!  We hung around awhile and then headed home. And because we hadn't had enough of each other we went to one rider's house and made waffles and had local sausage and her own maple syrup in the spirit of the day!  Can't wait to do it all again next year!
Posted by ajh at 10:01 PM

The scenery is beautiful!

Hard to top a day like that! Aren't you glad you can at least get out on the bike? Have a great week!

Wow, what an awesome event! I bet you didn't need your packed lunch after all... and I think the cow is cute!

Wow! You have the best adventures. I've always wanted to visit Vermont. Your posts make me want to move there! Your pictures are great.

Oh my goodness, what an incredible day!! Love all the pics, of course, especially the one of you petting the cow. :-)

That looks and sounds like so much fun! I wannnna go :)

That is just fantastic! Everything is super and I love the cow. What a great event! Thanks for sharing!

wow... those views are amazing and it looks like you had a great time!! (even petting the cow! hehe)

This looks SO FUN!

That sounds great and loved all the fall scenes!

Oh, what a fun ride. That would be a great thing to take part in. Neat idea!

My friend and I watched The Last Song the other day. Always good for a cry and I quite like the movie, and the acting, despite Miley Cyrus being in it.

I would totally pet a cow .. but I'm a bit of a farm girl. Raised many cows (and horses, sheep, goats, ducks, chickens....). They're sweet animals, although a bit on the simple side.

Neato-mosquito!! What a fun ride that seemed to be. You get to exercise, eat and enjoy the scenery! :)

That ride sounds awesome!! I have a HUGE weakness for maple sugar candy, so I would have never made it past that stop!

You look great!!!! Love the one with you and your co-worker and the cow ;)

What an awesome bike ride! I would love to do something like that someday! You live in some of the most beautiful parts of the country.

Oh my gosh! What a great event! I would have loved to taste the maple candy! Great pictures :)

I just enjoyed these pictures so much. What a wonderful day, I especially loved the maple candies. My grandma used to send those to us when I was little. You and the cow are very cute together, that was my other favorite! Get well, glad to see you're staying so active!

That seems like a lot of fun! I wish there was something like that where I live.

Fall is the best time in New England, I think. But then again I say that too about winters and springs (not so much about summers). I can just see myself going from farm to farm and stocking up for the winter.
Cows are actually quite cute and they have the most beautiful eyes with long, long eyelashes.
I know what I am going to be buying today. Maple syrup. And to think that I did not like it when I used to live in MA. Silly.

Those are awesome pictures, so very cool about that bike ride. I think I need to come there next year and ride with you. Or maybe not, I think I'd eat that entire box of maple candy (you know me!! And I LOVE maple). Actually, I think I just gained 8 lbs LOOKING at that maple candy. ha, that's my excuse for next week - your picture. I love the cow, I'd do the same thing. I grew up in Iowa, though, and my grandparents had a dairy farm...cows are part of who I am :). Have a great day, girl. Hope the weight-in went well!!

You had me at "cider doughnuts"! And I totally would have not just pet the cow, I'd have given it a big ol' hug. Looks like quite a fun time!
~RR

What a GREAT ride!! How cool! I'd love to do something like that.