Labor Day started out with blue sunny skies with temps in the high 60s. I was on my bike at about 8:30 for a bit of a longer ride. I headed down the mountain instead of up to extend the ride by  a few miles. When I came back up toward my house I didn't make the turn but kept going to do my more normal ride.  It was such a gorgeous morning and I was enjoying myself immensely.  Another rider zoomed by me so I tried to pick up my pace.  When I got to the "top" where I had taken a long curve as part of my loop he was at the top.  He said he had never gone this far up so I told him about the wonderful canopied road that he should try another time but at this point he was heading back down the hill to meet his family to hike.  I went across my favorite road where I met one my fellow racers from the 100 on 100 race.  Then I headed down the Gap on the newly paved road thrilled with this wonderful day.  Once again I saw my new BFF, my fellow biker, who was sitting on a guardrail waiting for his family. I bet he wished he had gone my route!  I headed back home so happy with how I began my day. Then I headed to Burlington to pick up my son to take him out to lunch and to a movie. We went to see The American. Neither one of us would recommend it.  Not terrible but rather slow moving and not terribly exciting. If you have seen it I would be curious to know what you think.

Tuesday I had two appts. in Burlington so I threw my bike in the car to ride afterwards. I almost didn't go but so glad I did because it was the best ride!  The weather was perfect, the sun was out and it was beautiful.  I did the 14 mile bike path which thankfully wasn't too crowded. I did stop to play with my gorillapod.  I tried to use it in a spot I haven't taken pictures in before. I made several attempts, none too successful but they did add some hilarity to my workout! 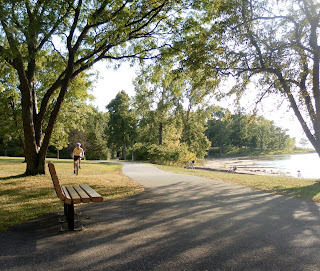 I've turned around and am heading back toward my camera
on a different bench but I haven't quite made it to the sidewalk yet. 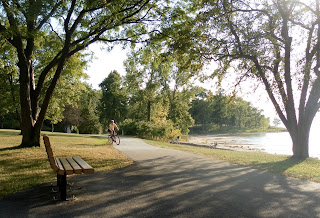 Another attempt - I was going to keep trying but
too many people stared coming along.
Then today after two great rides I returned to the gym for the first time in months.  I used the treadmill to walk and the elliptical.  I had no fun at all!  Back to being discouraged.
Posted by ajh at 9:31 PM

You and me need to go to Mexico, sit on the beach and let some strapping young hot guys bring us margaritas for about 4 days!!!

You've become quite the rider! I thought of you as I rode my bike today--I think we need to do a chicks adventure weekend.
BTW I've never used my pepper spray either.

Don't get discouraged - you're turning into a world-class cyclist while you are healing your heel!!

You need a longer timer on the camera. At least you got some candid shots to laugh about. Can't beat that weather - let's hope for a long, beautiful fall!!

You certainly have some beautiful places to ride!

Lovely rides you are having! I can just imagine what people were thinking when you were busy with the gorillapod. Don’t get discouraged, you’ll get there! Take care!

you can't get discourage, you are amazing!
You'll see in no time you will be back to running
Love your pictures, great place to ride your bike.
take care!

Sorry it didn't go so well at the gym. You're doing such a great job staying fit with your bike! Hang in there...you'll be back. Hugs ((()))

I can completely empathize with your rehab blues!! Trust me, it hasn't been all sunshine and rainbows for my rehab either! Stick with it. I just keep trying to remind myself how good it will feel to cross the finish once I can race again!!

Those bike rides sound good enough for even me to do - I get board on the bike, not the treadmill! Hahahaha!
Don't be too discouraged, you're doing everything right - you'll be back before you know it ;)

Weekend weather was beautiful here as well! I'm glad you got in some beautiful rides.

oh self-timed pictures. always a good time :) i would have been 'embarrassed' if other people were around too.

don't be discouraged! you can still bike, all hope is not lost. as for jill and i - we just email each other ~1x/week about how our eating went and how much we are up or down. we are hoping that having to "report" to someone will help keep us accountable. you can definitely join in if you want - email me at lindsay at chasingthekenyans dot com and jill is runlikeagirljp at gmail dot com. :)

Bless your heart! Hang in there...things will get better:) You had a few nice bike rides...it looks so pretty where you live!

Take care of yourself...chin up:)

Don't be sad :) You are becomming a great rider in the meantime! I know it is hard, trust me, I know...but you will get better!!!!