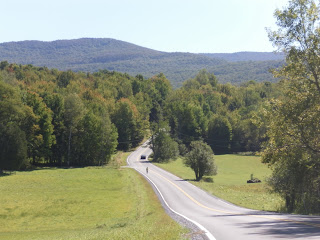 You come down a hill before this uphill which makes it oh so much fun!
Okay I am over my discouragement of healing time for the heel.   When I go back to the gym I might feel differently but today I'm happy so I'll take today.  I am doing my stretching exercises needed and I had another awesome bike ride. I called a friend to see if she wanted to ride with me and she absolutely did. It is easier to find biking partners than running partners. So we did the route I often do which is slightly more than 15 miles.  It was a sunny gorgeous day and we got a lot of talking in too.  Even though we work in the same building I never see her. I don't know if I even saw her to say hi to all of last week. Ridiculous but reality.  She took a few pictures for me that I could never have gotten with the Gorillapod. 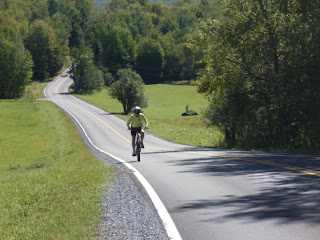 Almost at the top! 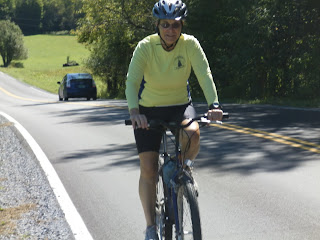 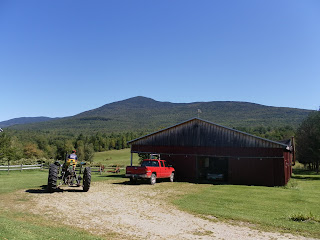 View from my friend's house. It's wonderful!
Sunday there is a race in Burlington that I have run in for several years.  It is one of my favorite races. It is a 5 miler, a distance I like. It is end to end so no going back up what you have come down.  It is mostly on bike paths which I love. It is all hills which I don't love especially because the last couple miles are uphill but in spite of that this race is a winner for me. But I am not going to race in it and continue to baby my heel.  Hopefully I will be racing other races later this fall including at least one new one.  I am beginning to accept that I won't be doing my marathon although I haven't totally yet which is so crazy because I am not running and I certainly haven't been doing those all important long runs. To go from nothing to a marathon would be insane and set me back. Why is it so hard to know all this in your head but believe it in your heart? 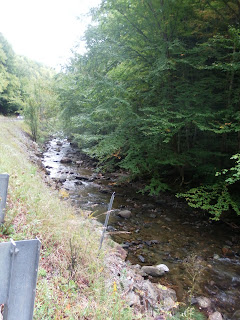 Riding beside a nothing special river   perfectly acceptable river
just not as nice as "mine"
Today (Sunday) I had another great bike ride.  I have to say this injury has certainly had a golden lining. Why did I ignore my bike so long?  I went about the same distance as yesterday but the terrain was harder.  I headed down the hill along the river, then turned onto the road with the poisonous parsnip but it has all gone by. This was the busiest road for traffic so I was glad not to be on it too long!  Then I headed UP the mountain for about 3 straight miles of uphill, some steeper than other parts. I just took my time. 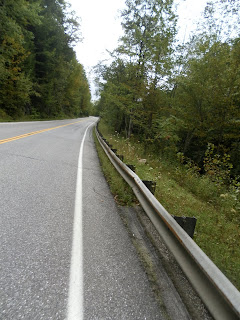 Some of the uphill
I wasn't sure where I was going to turn.  I had planned to take a right about 2 miles up the road but decided to keep going.  I was having fun and decided to go farther plus it helped me avoid one majorly steep hill.  When I jump into the water I am a "jump in all at once and not a wade in kind of gal." But when it comes to hills on a bike I like the wade in and tackle a little of the steepness at a time versus the jump right into it and pedal up that massively steep hill!  When I was at about 3 miles up the mountain I veered to the right.  If I continued going on the main road it takes you over the mountain to 3 major ski areas eventually. 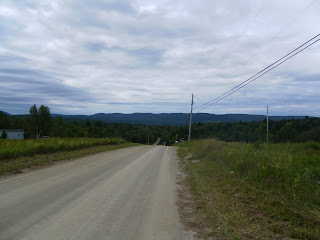 Veering toward the right
Now I had hit dirt road. It continued to climb but nothing terrible.  I enjoyed this road a great deal as I am rarely on it even in a car.  It was pretty deserted until I came to the Meditation Center where something was certainly happening as the field was full of cars, there was a school bus there and a gazillion people walking all over the road. 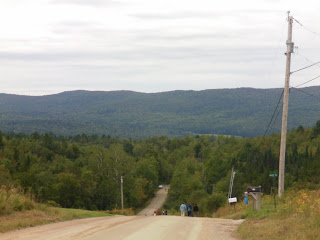 Once I got off this road I had a choice of going right or left and I went left toward the center of town.  At that point I was where I usually ride/run but I had certainly taken a different route to get there.  I loved that it was a loop.  My usual ride has a loop in the middle but some of it repeats. 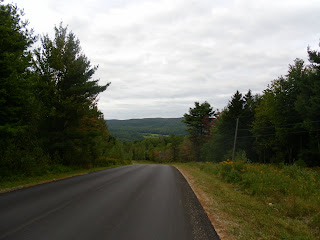 Heading down toward the center of town
Overall I did 60+ miles in 4 bike rides this week and I feel good about that.  I only thought about the race I would have liked to have been doing once or twice on this ride! Not bad at all! 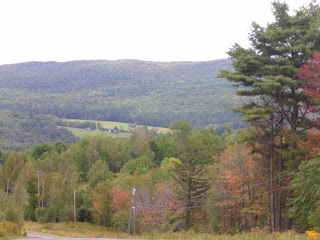 I've got to do this ride again when the leaves have changed!
My husband and I got to the movies again this weekend.  We went to The Switch which I totally enjoyed. I laughed a ton which was just the ticket!  We weren't sure we would get there after yesterday's debacle but we managed to. Have a good week everyone!
Posted by ajh at 8:31 PM

Breathtaking!!! I would LOVE to visit you and tour your beautiful countryside.

I'm "teaching" a Credit Recovery class and the kids work on their courses on the computer...self paced. That's how I have so much time :)

Wow! Such beautiful terrain...lucky lady! :-) Glad you've made peace w/ the bike and maybe having to skip your marathon. I know that's a tough decision, but a smart one.

*hugs* from Orlando! Looking into the magazine subscription issue. Have been in bed, sick, since last week, so I'll try to give them a call Monday.

You're doing the right thing re the race. It'll be there next year when you're all better. And for the moment you seem to be really enjoying the cycling. Great attitude!

Me and you both! It's so hard to turn the page...but, I guess if we want to be back out there and feeling good...we have to be smart about our choices.

Your bike rides are amazing!! Such beautiful countryside :)

Goodness, I love your bike rides! All I see on my riders are cars, gas stations, strip malls and red lights.

Wow. I love the scenery you have out there. DEfinitely ride again when the leaves change color. It will be absolutely gorgeous.

I am in a similar situation at the moment - I've got a lot of heel pain too, which doesn't seem to be getting any better (although I've only had it a week), and I've also been enjoying bike rides instead of running.

Hope we both get better soon!

Oh, the ride will be even more beautiful in the fall! I've rekindled my love for my bike recently too! It makes rehabbing running injuries a little more tolerable!

VERY nice places to ride. You might just get hooked on the bike! You will definitely have to post pictures when you have a thousand varieties of leaves changing color - looks like it is just starting.

BTW, sorry about the snake pics and a Prairie Pie is flat and has toppings out to the edge, whereas a Mountain Pie has a large, outer braided crust - both are good!

Great job on the rides. It's good to hear you are coming to terms with your heel issues and taking charge! I have had several injuries over the past three years that got me back on my bike and just like you I always wonder why I don't do it more! Keep healing!

The views are beautiful and will be simply breath-taking with the fall colours! Awesome bike rides!

So glad to hear you had a wonderful weekend. Gotta love country roads. I bet all that biking will help with your running when your heel heals.
I was looking for the signs of fall in your pictures but I guess it is still too early.

Holy crapoly! That Anna Quindlen book is so sad. She's an amazing writer though...

Beautiful pictures; I love fall, those trees are going to be awesome when they finally change colors.

Nice job on the 60+ miles on your bike! Hang in there and take care of that heel!

Love your pix. VT is so beautiful!

those are some gorgeous rides!! whew that hill, i may have been walking my bike up that one lol.

it's a tough decision to pull yourself out of a race but you have to remind yourself that it is the best decision you can make. i know you want to run now, but i know you also want to run 2 months from now, 3 years from now, etc. at least you have those gorgeous (but tough) bike rides to kind of keep you preoccupied?

I hope your heel is doing better. Since I've been out of the loop, I didn't know you had been struggling with this issue. The biking alternative looks fun and I enjoyed the pictures, such a gorgeous river(of course, I'm easily pleased as far as rivers go!).
How is your class? Are you adjusting to the routine?

Thats it! I am taking a few days off and coming to visit you:) We can go bike riding in your hood! I just can't get over how gorgeous it is in your neck of the woods! I agree with Kathleen, you can see that it is starting to actually look like Autumn:) So pretty and check out those colorful leaves!

Keep up the great work...you are biking alot:) Take care of yourself!

Fantastic photos! You live in a lovely place, thanks for sharing! Those rides look like lots of fun. I can’t remember when I last got onto my bike. You make me think…
The race I ran has a waiting list. They invite 250 each year and then you can run three years. After 3 you have to put your name on the list again. I waited about 5 years to get in.

My goodness you live in a beautiful area. Wow, wow, wow.

Oh Andrea, you are living in such a beautiful place. Kind of jealous of where you live compared to my own, it's so boring here.

I think your heart hasn't accepted it yet because you love running so much. Eventually it will but it's like breaking up a relationship, it needs time to heal.

Great ride, your pictures are always spectacular! The healing heel will come soon, have fun in the meantime! ;) (and be careful on some of those roads - yikes!)

What a beautiful bike ride! I' m eagerly awaiting the changing leaves too! Such a beautiful time of year. I'm glad you can at least bike ride while healing. It's so hard to let go of a goal that you've been working towards. Stay strong - that heel will get better!

what a beautiful place you live in, and I just read about your missing car, too funny!!!

You are rocking it on the bike though, so hopefully that heel will start behaving. Who knows, maybe this time next year you'll be doing a triathlon!!!