1. My training this week:

Four miles on the elliptical on Monday.  I would spell this workout B-O-R-I-N-G.  I needed to keep the course flat or it definitely hurt my heel.  My overall effort could have been much better but see the previous sentence. I am making real progress and don't want to wreck it.

14+ miles on the bikepath on Tuesday following my PT appt.  It is a flat path but it was exceedingly windy and I did feel like I got a very decent workout.  I always love the bike path so life was good. My husband was using my camera so no pics which was fine on the bike path but later I was dying to have it. (Why you may ask?  To be answered below!)

Four miles on the elliptical again today and I must say they were much better!  Maybe I am getting my elliptical groove back. I had thought about biking but it was pouring and cold.  I can run in that but I guess I'm not up for biking in the same weather.  So .....to the gym which I have been paying for all summer and not using so there  is a plus side!

2.  Tuesday while I was on the bike path it was also raining at times, sometimes hard. As I was driving home I was driving in and out of rain.  The sky behind me was sunny and the sky in front of me was very dark!  I looked for the rainbow and oh yes there it was.  I like rainbows as much as any little girl hooked on Wizard of Oz.  The entire way home I was looking at a rainbow but... that isn't all.  It would fade and then show up again. Well, I hadn't seen it for awhile and when I came around a curve I made a loud gasp! It was startlingly beautiful and vivid.   Unbelievable.  Man I wished I had my camera then.  I couldn't believe how vivid it was.  Plus I could see the end of the rainbow! Even as it left the sky and fell across the trees the colors were clear and bright.  If only I had gotten to the end and found the gold!  I did call a friend to tell her to go out and look. Her husband - coming from a completely different direction - had just called to tell here exactly the same thing!  But - no pictures!  It did certainly make my ride home a treat.

3.  Okay I've got to go do something.  OUCH!  That hurt. I just removed my "upcoming" marathon from my sidebar and have no - yes no - upcoming races.  THAT.DOES.HURT!

***But a totally awesome bike ride on Saturday!  I'll fill you in after!  And I'm off to do the exercises my PT gave me so that running will happen sooner rather than later in my future!*** 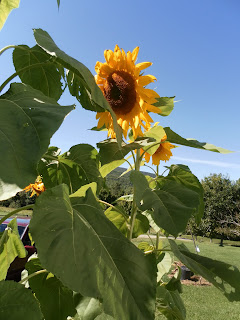 No rainbow pictures so this sunflower will have to do!
Posted by ajh at 9:00 PM

Sunflower does it for me!

I love the sunflower. I'm with Andrew. :)

I love sunflowers! My other favorite is calla lily.

Nature's beauty never ceases to amaze me. I drive to a school that's in the Delta and they grow lots of cotton. The cotton fields are so pretty. Imagine a field dotted with white spots.

Never finished reading Wizard of Oz or Alice in Wonderland. I was too scared to find out what happened. Still scared. :)

I like the sunflower, too! Sorry about zero races in the sidebar, but it won't be forever!

I loved the comments you left tonight, I TOTALLY get it, we've all had THAT class but it's exhausting. I feel for you, BIG HUGE HUGS. The teacher two doors down has ONE OF THOSE CLASSES and it's hard on everyone...hang in there and keep biking and looking for beauty everywhere!! The sunflower made me smile!
Keep moving forward, you'll be back to marathon planning in no time!

I hear you on the pain of removing the marathon from your sidebar...and I know how much you love races, so having none planned...sigh.

I don't know what it is about the elliptical but I cannot stand it. If I have to, I will do it but I don't even feel like logging it as a workout after.
I love rainbows but I also love sunflowers.
Your new header picture is just wonderful.

I love the new blog header pic! I want to come ride there! Maybe you could find a duathlon or triathlon and do it as a relay with a friend! You could do the bike portion! Gotta get some kind of race on that side bar. :) You're doing awesome!

When I first started coming down from 300 lbs, the elliptical was all I could handle. So I have to thank it, but I'm not sure I could get on one again.

A sunflower is just as happy-making as a rainbow.

yes, that must have been hard to remove that race from your plans - but - you are doing the right thing and listening to your body. So you were rewarded with that beautiful rainbow! Life can be so sweet! Hang in there with the elliptical...

You are doing well while injured and it will help your running later. We always find something beautiful when we don't have a camera. The sunflower is great! Keep it going, you'll be running soon!

Oh, being a Kansas girl, I love love love sunflowers (our state flower) and rainbows (How can you not love Oz and be from Kansas?!). Sounds like you've been having some great rides - you're awesome!

I love sunflowers & they photograph better than rainbows. Sorry about your marathon - I bet you do it next year. Let me know when you're better. There are some fun ones around here such as Oct 31 - http://www.albanyrunningexchange.org/hgh/index10.php

Sorry you had to take that marathon off the plate. But you'll be back stronger than before, I'm sure.

Love rainbows and sunflowers! Keep looking for those positive tidbits!

I love sunflowers! I have some on my desk right now actually. Keep up the good work with your cardio and PT so running won't be so hard when your heel cooperates again.

I love the new picture in your header! There is something about sunflowers that always put a smile on my face:) Enjoy the weekend!

Great job getting your activity in! Hopefully you will be on the mend and adding some races soon!

Maybe that rainbow was special, just for you to appreciate all on your own. Don't worry about the lack of upcoming races. You'll heal up and then I know it won't be long until your back on the super track.

Gasp about #3! Your header pic sends me into cardiac arrest.

I, too, have a "tbd" in my side bar for upcoming races. BTW, if you had already paid they may push your entry fee to next year.