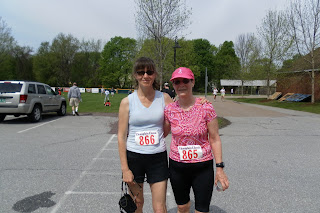 Happy after the race!
I woke up this morning to a pounding rain shower but it didn't last long and the sun came out. It really came out!  Temperatures reached the 80s.  This has been a bizarre week weather wise. So I got up and did my pre race stuff.  T picked me up and off we went.  We had a lot of catching up to do as we hadn't seen each other for quite some time.  I don't get too nervous until I am almost at the race.  I don't feel mentally nervous but my GI system says otherwise! We registered and got the last two shirts - XL. Oh well, hope someone can use it.

My race - the 15K started 10 minutes before T's race the 5K.  There was some nice excitement in the crowd.  Before I knew it the gun fired and off we went.  I did the first mile way faster than any other mile in 8:15. The rest of my miles were 9s with one in the 10s.  A lot of the race was on gravel trails.  We headed down one trail, crossed a road and headed onto another one. I had actually run on the farther trail last fall after an appt. in Shelburne.  We came upon the lake and it looked beautiful on this sunny day!!!  When we got back on the road, we saw the lake quite a bit.  It was hilly but any hill we went up we got to come down later or of course the opposite which isn't so fun.  I stopped at all 5 water stops which I am not usually good about doing.  I knew that it was much hotter than I was used to and I'd better do it. (In spite of this after the race I drank several cups of water and it was a  l-o-n-g time before I had to pee so I should have been drinking even more!)  I was feeling okay although I didn't think I was going as fast as I would have liked.  I was glad to reach the turn around - both to head back and I am always worried that this race maybe I am last!  I like meeting people and seeing that this is not true.  I had just decided that we were all settled into our places when to my surprise I started to pass people.  It was just before reaching the Mile 7 sign that I really noticed I was feeling tired. BUT I passed - and stayed in front of - 9 people before the end!  One woman I passed came up to me later to tell me how much I helped her because she was fading and after I passed her she worked hard to keep me in her sight!  I finally reached Mile 9 but that last .3 seemed to take forever!!! I felt good when I finished, tired but thrilled to have completed my first 15K. 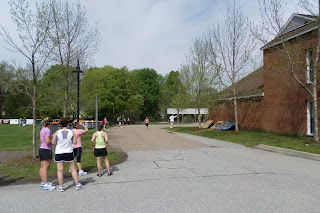 Rounding the corner as I approach the finish 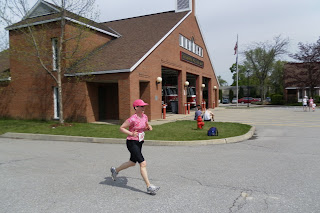 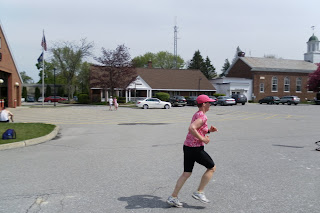 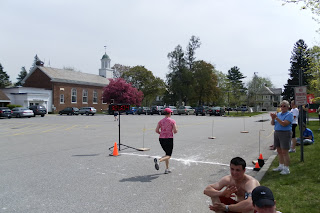 And there!
Recovery food was bagels and cake!!! I love cake!  I had two pieces with lots of frosting!!! Terrible, right?  It's funny because I dreamed about being at a buffet with friends the night before and they were appalled at how much I ate and what I was searching for and couldn't find was cake. I know that is a pretty strange dream. What does it say about me?  Probably that I am not getting enough cake so I am glad I could rectify it today!

T won third place in her age group! :)  Then she won a pair of shoes that she gets fitted for at Fleet Feet! I just may get her back for more races!! (She has already promised to race next weekend with me!) 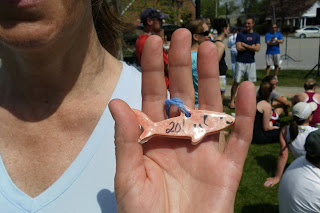 Age group awards were various fish - appropriate because Champlain is Lake Champlain
The 20 is because it was the 20th year of the race!

Great job on the 15K! That's a nice pace for a warm race. Love that little fish!

Awesome race! Congratulations! Way to keep up the pace at the end and pass people!

Fantastic time...especially the first mile. Wow! I can't even run that fast in my dreams.

Good job to you and T.

Good job on your 15K! You ran a fantastic pace and should feel pretty proud of yourself! I love the pictures of you finishing:) Congrats!

Great job! I wish I could run consistently in the 9's!

wow - sounds like a great race, especially the CAKE!!! Congratulations on your PR, too!

Great job! I love the pictures and the cake! Congratulations!

Woo Hoo! You look strong and happy! I had to click on your photo to see those hitchhiker thumbs you told me about: does not look nearly as obvious as my chicken wings :-).
As a lover of all things cake, I think it is a brilliant post-race snack!
Congrats.

Congrats on your first 15K! Cake in almost all forms is wonderful and should be served more often!

Great job on the 15K! I have always wanted to run one. And cake? There in no better post race food!

Bagels AND cake?? Carb heaven. I loved reading about the woman who came up to you at the end, love hearing things like that. Great job, especially in the heat!

In my race yesterday, water was an issue because it was so unseasonably hot, so people were sucking it down like crazy. I read on my run club message boards that alot of the hospitals had runners in the ER, one had 30 runners!

Congrats! Sounds like you had a great one. Love those awards. Very cool. And cake? Yum!

Congrtaulations!!! You did so well. Aren't you glad you did the 15K? I knew you would rock it!

Awesome job!!! You did great! I like those out and turn around races too! My race yesterday had about 2 miles out then two miles back where I could see that I was in fact NOT last! So funny the way we think when we are running!

Great job in your lst 15K - I love cake!!
We spent several summers at CrownPt and boating on Lake Champlain.

Congrats on beating your goal of 9:30 with a 9:15 average! Glad you got that cake you dreamt about! Cute running shirt!

Congrats, and good pace! That's funny you dreamed of cake. Must have been meant to be.

Awesome job! I would love to chow down on cake after a race! lucky you actually got to do it!

congrats on a great race and the 'auto' pr!!

Congrats on running a great race...and that's a pretty awesome time! You totally deserved those 2 pieces of cake :)

I LOVE cake too :) Congrats on the race!

WAY TO GO! I like the age group prize, as well as the awesome photos of you barreling towards the finish.

Congrats on the PR! Love the fish, and especially THE CAKE! As much as we talk about 'appropriate postrace food,' cake just sounds fun. :) And two pieces..good for you! LOL Only thing missing was chocolate milk to wash it down. hee hee!