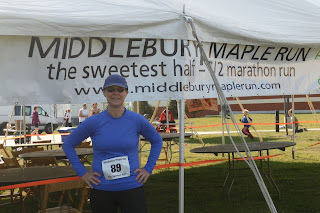 Before the race, I did ditch the long sleeve shirt
It couldn't have been a more beautiful day to look at for The Sweetest Half.  It was cool, sunny and the sky was brilliantly blue.  Unfortunately  there was a fairly strong wind.  I could not make up my mind what to wear. I decided on my compression shorts but was still undecided about my top. I hate being cold.  I had on a short sleeve shirt under my long sleeve.  Just before the race began I did decide I could hack it and only wore the short sleeve shirt.  It was the right decision as I was never that cold and the second half the race was quite warm.

There were about 500 runners.  This race also had a two person relay which was divided 7/6.1.  I had a few friends who raced this as their first race longer than a 5K.  The course was beautiful. (I heard MANY people talking about this.)  The course was hilly.  (I heard EVEN MORE people talking about this.)  I did not appreciate the beauty as much as I might have, perhaps because I am so familiar with parts of the route. I did certainly notice though not appreciate the hills!

The race was very well organized and started right on time.  We headed through Middlebury which is  a picturesque Vermont town.  We headed out of town eventually going through a covered bridge. I couldn't see the boards well in the dark and was worried I would trip.   We went past the Morgan Horse Farm.  Again - very picturesque.  The Morgan Horse is the Vermont state animal for those of you who like trivia.  This was about 4 miles north and we had been running into a wind.  We turned west for a short ways before we headed south on a dirt road.  All through these miles were some rolling hills, some more than what I think of as rolling!  I was watching my splits and realized that as I had thought this would not be a PR.  I was trying to run around 9:30 but unlike my February marathon, my miles were all over the place.  Most were in the 9s, two were in the 8s, and the last few in the 10s.  When I raced in February I managed to finish faster than I began but that was not the case today.  I felt like I was working hard the whole race but not getting quite the results I wanted.  Enough about that for now, back to the race. We did the 6th - 7th mile on the Middlebury College campus and it is a beautiful campus!  This was also the relay exchange. Students were out cheering.  I assume a lot of Midd. Kids ran from the cheering I heard for some around me throughout the race.

(When I got there in the morning I couldn't find anyone I knew so I asked a girl I was standing by to take my picture.  Instead of simply taking a quick picture she suggested we go over by the race sign to make it better.  I was very impressed by this Midd. Kid who was there to support her friends as she was injured.)

Then we went back by the hospital where we had begun.  As we ran by the hospital we began to meet runners coming in!!! I kept telling myself that yes I could run 5 more miles.  This part was an out and back so as we went down hills we knew there was a price to pay later. Overall the mile markers seem to come quickly but in this section that was not as true. I just wanted to turn around and head toward home.  I saw my principal who I will be running my next half with and then I met C at the water stop.  This was her first race longer than a 5K and she was beaming. I had not seen B, her relay partner, in the first part. C had also yelled for me as I went past the relay exchange!!! After finally turning around I knew I could do it and I was trying to maintain a decent pace. It took lots of effort to just hit in the 10s. I didn't want to slow down any more so I continued to push.  When I rounded the last corner to run the last .1 I did not feel as I had any big kick in my legs. But I did it and was very happy to FINALLY.STOP.RUNNING!

It didn't take long before I was freezing. It was cool and still quite windy.   Just putting on my long sleeve shirt didn't quite take care of it but my car was parked about 1/2 mile away.  I was in the food line when I had some stomach issues so I got out. When I came back the line was huge.  I waited but found most of the food unappealing.  The undercooked chocolate chip cookies were the best thing.  I ran into a few people I knew since this was a local race.  Then I headed home as I was still very cold. I was exhausted, more than usual following a race. When I got home I took a long hot shower to warm up and then crawled into bed!

I think that's a great time. Especially considering the hills. Congrats! I'm excited to hear about what you'll race next! Have fun planning!

Congratulations!! Sounds like a great race and you ran a strong time!

Congrats on your time! Doesn't sound like an easy half due to all of those dang hills, so it looks like you had a great race!

Glad you found someone to take such a great pic by the race sign. :)

Nice job on a hilly half! You ran really strong.

I'm hoping to get up to Vermont in the fall for the Octoberfest and race at Harpoon Brewery's Vermont location. Is that anywhere near you?

Congrats on your race. That's an amazing time...I am so inspired by you. There IS hope for me yet ;)

I absolutely hate that freezing feeling, congrats on a great race! That was nice that the injured runner took your photo by the sign!

If the mood strikes, you can always drive east for this Sunday's Mountain Goat 10 miler in Syracuse!

I think that you did awesome on your hilly half!! Weather sure does have so much to do with performance...next time it will be warmer for you:) I love the picture! I think it is great that you are checking out future possible races!

Nice job on what sounds like a difficult course.

You are fast! If I ever get close to your paces I will be beyond thrilled!!!

That is an awesome time considering the hills and wind! Congratulations.
BTW, my mom gave her childhood copy of "Justin Morgan had a horse" to one of my boys for their first communion and so we know all about the Morgan horse here!

Congrats on a great finish!

Great job on those hills!

Great race! Nothing like that post sweat, clammy cool down - very hard to chase that off. It is always nice to have sweet scenery during the races. Have fun planning for your next one!!

Excellent job hanging in there! You are an inspiration!!

With a name like the Sweetest Half, I would hope the weather would be great!!!

You are my hero. Great race! You totally rocked it

Congrats on your time! You did great with the hills and wind.

Oh how I hate hills in races. Great time though!

Way to go on a tough course. It sounded beautiful, though! Congrats.

Good race! It's so hard to decide how much (or how little) clothing you need. The out and back at the end would have been pretty tough mentally.

Congratulations! Nice pic. Sounds like you appreciated the day, the well organized race, the scenery and the opportunity to "STOP.RUNNING". That was funny! Good luck choosing the next one!!

Great report and great run. Sounds like you fun.

congrats on a great race!!

Great job on finishing with a great time! To finish the race fast - fun! How inspiring that you race so often!

Congrats on toughing it up and great finish. Winds are nice when one is sailing, not running or biking.
You are a brave one. I would run in long sleeve on top of the short sleeve and after a couple of minutes you would see me taking the long sleeve off and tying it around my waist. I am a wuss. :(

congrats on a strong race in the wind and hills. only a minute off your last (FLAT) half is clearly some awesome improvement :)

Way to go! Sounds like a solid run on a tough course!

Finally getting caught up with everyone - it's hard to take a vacation!
Congrats on a well ran race! Way to push through the tired feeling! And you had a great time - very impressive!
I'm excited for all your upcoming races, you're like me, I can't race enough!!!

Wow! Sounds like a beautiful race! I'm envious. :) Great pace, too! I have the same 'stomach issues' after a race - every time. What an awful feeling. Wondered if anyone else did... I'm sure the choc. chip cookies helped! :)

Congrats on a great race! I love that you race so much--awesome!

Great time! Especially with hills and wind. The wind can be brutal!