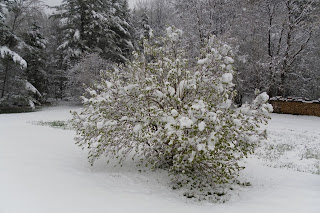 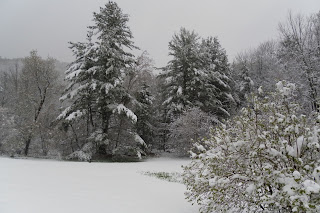 1. Yesterday I ran in short sleeves and capris.  Today it has been snowing since 7:00 a.m.  It has snowed ALL day!  The kids at school were in the window half the day watching as if they had never seen snow before.  But I must admit that I have not seen it on April 27 so I was watching with them half the time.  My colleague who turned 37 today said there has never been snow on her birthday before. It is still snowing and expected to snow through tomorrow night!

2.  I am positive quite sure I will do these races the next two weekends.  I am looking at a 15K (Champlain Classic) this coming Sunday. I am a little hesitant as I am still lame from the half marathon and wonder if I want to spend half of next week being lame too.  But I have never done a 15K (PR, here we come!) and would like to give it a shot. There is a 5K option too if I wimp out change my mind.  I am also planning to do the Sunshine Run the following Sat. It is a 5K that is a fundraiser to raise money in honor of a student who died at a local high school last year.  The best part is my friend T is going to race them with me because she is sick of not running with me as I race!!! (When she races I drop down a place in my age group but that is okay because I love to race with friends!!!!)

2a. I am also looking at a couple of races this summer that involve traveling. One is in MD.  It has a mother/daughter division. Hmm. Who lives near MD that could do this race with me. Actually Em is the one who found it!!! It is the Run for Roses 5K.  There is a race in July in Colorado Springs and I hope to be visiting a friend. I really would have liked to do the Garden of the Gods but can't get there then. She has promised me she will run the route with me. The race that I will be there for (I hope) is The Summer Roundup Trail Run 12 K.  I have never done a trail run or a 12 K. Can you say PR?

3. I want to give a big shout out to Robin at Running Circles Around the Turtles.  I won a magazine subscription from her but she didn't want to make me wait for it to start so she sent me a magazine in the mail!  How nice is that!!!!!!!!!!!!!!!!!

4. Monday's Brain Exchange question from Finishing is Winning is,  "Have you told your family and friends about your blog?" "What do they think of it?"  Well, as many of you know my daughter and son are in this bloggy world too so they know about it and must think it's just fine!  My husband knows about it and is mildly interested.  Many of my friends know about it.  I have even gotten a few of them to become followers but I have discovered they never read it or never comment.  Most aren't interested as they aren't runners.  They don't GET IT! 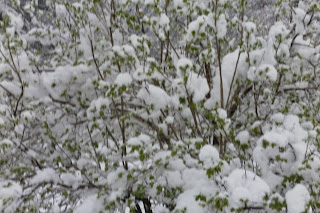 I need to look for a race for us to do as well!

So weird that it's snowing!

Yay for running with friends and family. I LOVE to run with my dad and often meet them places for races.

That Sunshine Run sounds like a great one to do.

It snowed here all morning!!!! And it's going to be 77 degrees on Saturday! Seriously, what's going on.

Looks like you took pictures in my neighborhood...we both started our posts with pretty much the same line :)

So many cool races you're planning...I look forward to hearing what you think of trail running...I'm curious about those.

I am like you and always looking at different races that I can fit into my schedule. I think I need to settle down....I have many on the books...I forget about rest. I really thought that I had this weekend off. After getting a comment from Jenn at Running Sane, I double checked and I run again this Sunday!! Four weekends in a row...two halfs and two 10ks!! Holy crap! I am in trouble:)

Snow! Seriously, it's just not right:) Have a good one!

We get it and it's so fun following you and all of your racing! This weekend sounds busy and fun!

Your excitement over continuing snow in April is just about as high as ours... As for Summer Roundup, that is a cool race - we did it two years ago. Search "Summer Roundup" on our blog if you want info. We might just have to bump into you if you're out for that!!

Wow, you've got a busy race schedule there. Very cool about the mother/daughter race. I think that would be fun.

Robin is pretty awesome isn't she :)

My husband and kids know about my blog but no one else :) I don't know why I haven't told them.

I've been living in Johannesburg my whole 46 years and it only snowed twice. I would definitely be at the window (or outside) the whole day.
Busy race schedules are good as you keep training well. You end up in good shape on the other side.
My family knows about my blog but are not the online type.

Snow after Easter is just odd!!! But the pics are beautiful!

At my speed, or lack of speed, running races often is not so bad. I'm quite good at not pushing the pace when I do this.

I have the same reaction as you on the blogging. If they aren't a runner they don't care.
Love your pictures of the snow.

Sounds like a bunch of fun races! Good luck with them. And seriously, what is up with the snow?

The snow is beautiful! We never see stuff like that in Texas. :)

Oh that snow would do me in at this time of the year! Hate the white stuff, even in January!

I am in Md but am doing the Baltimore 10-miler that same day. It's a shame--I would have joined you!

You asked about the peppermint oil tablets. Yes, you can get them at a local health-food store. Here is the post I did on them: http://misszippy1.blogspot.com/search/label/peppermint%20oil%20tablets

Holy snow! Some cities around here got dumped on earlier this week, but we remained clear... so far.

Sounds like some fun races coming up - got to love automatic PR's!

Look at all of that snow!!! It looks like you will be busy with more races! That is awesome. I am so jealous :)

OMG with the snow. Just tell mother nature not to send it to NJ!!!

Are you getting more snow today? I keep hearing about snow in the mountains all around me. Your race schedule looks good!

I can sympathize, Colorado always gets those wacky snow storms too, sometimes as late as June!

Sounds like some great races! You are going to have a busy schedule.

My family and friends know about my blog, but most of them don't comment on it. My family reads it, but my husband doesn't. He's not into the bloggie world. Doesn't know what he's missing!

It snowed here the other day and is 75 today. Crazy spring. It's funny cuz my non-runner friends can't even find my blog, despite it being in my email signature. Haha.

A bit late congrats on your race. If you want to forget the snow and enjoy the warm spring come to Italy!
Beautiful pictures

Ugh, snow in APril - how awful! I can't believe the weather this year. Insane!

I am so jealous of your race schedule. So full all the time. Maybe one day for me :)

Yikes! Snow at the end of April would just make me cry. I am not fond of snow!
It sounds like you have found some fun races. Good luck with all of them. Looking forward to reading all the race reports!

You are most welcome for the magazine. Hope you enjoy it! :)

I'll be thinking of you this weekend, for the 15K.

That is some crazy weather!

You can rock the 15K...especially after all that running you did on vacay. Go for it!

That is so funny...all my friends/family know about my blog too, but very few read it and none of them comment!

All those races just sound so wonderful. You can definitely tell spring fever is running rampant now.

OMG - I can't believe that snow!! I ran in a tank today too, I would be totally bummed if it snowed tomorrow!

Sounds like you've got some neat races lined up - I think mother-daughter running is great - some of my favorite running memories are of the races I've done with my mom.

Did I hear right that after that snow you guys will have temps in the 70's? Gotta love April.

All these neat races mean race reports for me to read and drool over. Yippee!

I can't believe you had snow this week!