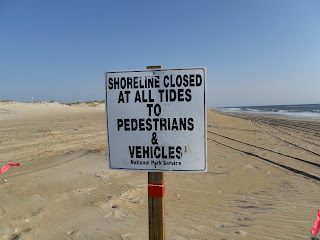 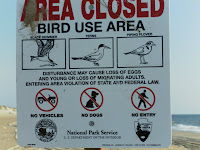 Yesterday we went to a store where there was a sign that no NPS allowed or they would be arrested for trespassing.  I had to do some research to find out what NPS even was.  It is National Park Service and I think the big problem is they are trying to close off part of the beach for bird nesting. This is apparently very controversial.  People want to be able to drive on the beach anywhere they please.  Today I ran farther north than I have run before and came upon the fenced off place.  There were signs explaining why the area was fenced off - a small section of beach with fences on both sides.  BUT in between the fences were many many tire tracks - very upsetting. 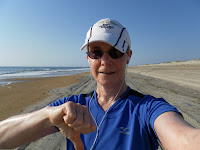 Fail??
So today was supposed to be a tempo run. Was it a success or a fail?  I ran 7 1/2 miles total and was trying to run quickly.  The tide was coming in and it was soft!  I tried to pick up the pace but my Garmin told me the pace was slow.  My effort  was increasing and my heart rate was certainly up there. I was exhausted! When I turned around to go back the tide was heading out so I hit some harder sand but was too tired to pick it up at that point. 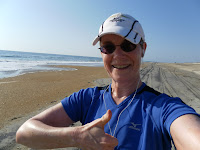 Success??
One of my friends spent a month in Africa so tonight was African night. We had an African meal, clothes and pictures. Her photographs from the Safari are incredible!  A good time was had by all! 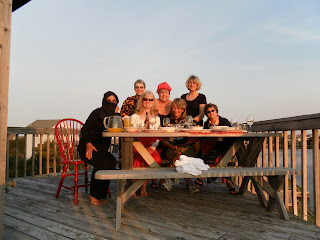 Way to go on the successful tempo run! Africa Night sounds fun too.

Great job on the tempo run...and it sounds like you're having such a great time. Love the African Night :)

No doubt a success.
Glad you are having such a great time. Enjoy!

If it felt hard, then it qualifies as a tempo, in my mind at least!

Definitely a success. Running on soft sand is so much harder than any other surface. It's a great strength workout.

As Char said, running on sand is a great strength workout. I used to train racing dogs and they were practically unbeatable after sessions on the sands. Just wish I lived nearer to the coast!
By the way, great blog and smashing pictures.

I am sure tempo running on sand is TOUGH.

I love your two Fail and Success photos!! Great job on your run!
PS - yes I know Brandon, he lives in my neighborhood about .25 miles away :)

You are so darn cute!! Nice job on your tempo runs on the beach. Running in the sand is so difficult for me. I am glad that you had a blast with African night:) Keep smiling!

love the dinner theme night....running on sand is a killer workout, slow or not!

Love the fail/success pics! Enjoy the rest of your well deserved vacay!

The pix of you on the beach make it look like you are out in the middle of NOWHERE! :)

Thanks for your comment. It is a far drive to preschool (20 mins), so it probably does make sense to stick around and run at least one of the two days I am up there!

Totally jealous of your beach pics! I wish I were back on a beach somewhere!

Glad you had such a great (almost) tempo run...at least part of the way!

How awful that people keep driving on that beach. I'm not a major animal advocate or anything, but there are just some things that are wrong and you just don't do.

Running is soft sand is torture, but a fantastic workout. I think you definitely had success.

Where in Africa did they go? I'm glad to hear they enjoyed it and shared with you. Africa is awesome! I saw and heard a Spotted Eagle Owl on my run this morning. It was great.

Running like that on the sand can be tough. Well done! We have the same problem here in SA and mainly with people driving over the nests of turtles.

Too bad people are subverting the attempts by the NPS at wildlife refuge, but that might just take time. I know it has taken decades for FL to get people to respect the rules about nesting sea turtles, but now, most peole are happy to comply with the regulations.

Nice job on the tempo run! Definitely a success!