I got my four runs in this week and they were very different runs.  Two were at the gym - boring right? Yep.  But I had one terrific one while my car's oil was being changed. I often bike when this happens but rain was forecast so I ran instead.  I miscalculated the distance so I ran 6 instead of 4. The only problem was being slightly worried I wouldn't make it back before they closed. That helped me pick up the pace!  I took no pictures but it was on a bike route I like. Lots of sheep, cows, horses and even goats.  It was a loop which I prefer and it was a new running route. I've run parts of it before but all together it felt quite different. I need to switch my route more often.

Saturday again it was supposed to rain so I put off my bike ride and ran - 11 miles.  Yikes!  I have decided I am going to run/walk my half in two weeks.  So at every mile of this run I walked for one minute.  It made a huge difference in my mental attitude knowing this "break" was coming on a regular basis. I didn't die and easily (but slowly) did the whole 11.  I haven't decided what I'll do next weekend. What do you usually do for a distance the week before a half marathon?

Today I rode 32 miles - and these days that is a longer distance for me. I waited for the afternoon as it was low 40s this morning.  I did a loop ride with part of it being around Lake Dunmore.  It was cloudy so not a gorgeous day but I had a great ride and really enjoyed being out there longer than I have been lately.  I dodged  a bullet as when I finished I found my back pouch unzipped. It carries my keys and wallet. Both were still there!  I am usually obsessive about making sure it is zipped. I had a snack when I stopped to use the bathroom and I think I was thinking I would put back what I didn't eat but I put in the bento box instead.  Whew that I didn't lose anything.

Yesterday we went to Tunbridge World's Fair which is in Vermont of course! It is an agricultural fair that we hadn't been to in 12 years.  It was packed but fun. We visited exhibits, animals and ate fair food - mostly maple stuff.  I went to go to get some particular articles that you can't find at a store.  Turned out the woman who owned the business was in my high school class. (We may have changed a bit in the couple of years since then - it took the conversation we had to discover this.)

Then I posted a picture on Instagram only to find out from Pahla that her cousin had posted the exact same picture moments before.  Turns out even though Pahla lives in CA her cousin lives in Vermont. Small world day for sure. 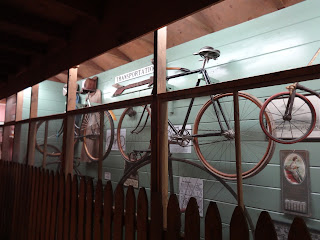 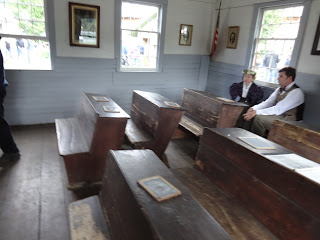 Had to visit the school. 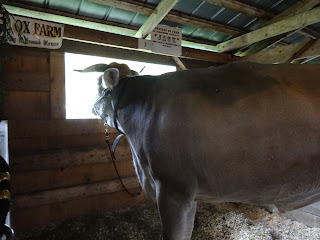 This guy weighted a mere 3000 pounds. 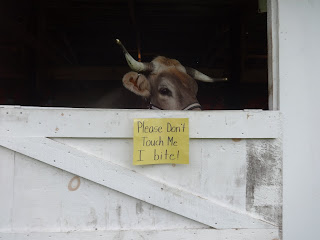 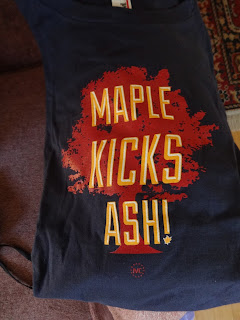 I am always so worried that when I put things in a pouch on my bike that I'll pull something out mid-ride and lose something else like my keys! Glad you didn't lose anything.

I also can't believe that someone needs a sign to not pet the cows because they bite!

I leave my Spibelt unzipped a lot. I blame dementia. Luckily nothing has fallen out yet but I did manage to lose $5.00 when I was pulling out my Honey Shotz. There's nothing worse than losing your coffee money.
As for your question about how far I run before a half marathon. If it's a target race I usually only do a 12k run. That'd be about 7 miles I think.

What a fun event to go too. I know understand your small world remark on my blog yesterday :)

It seems you enjoyed running through cows and goats.
Completely agree about switching our routes. I always try to change my runs so I can enjoy new sceneries.
Enjoy your 32 miles riding today!

Love your new cover photo! Sounds like you got in some really good training this week! 32 miles is solid!

You had some great runs and rides, well done! I love the photos!

Personally I run as little as possible before a big race, so I would cut right back before your half.

Small works indeed! You've got a crazy lot of miles lately! I like running or riding during appointments like that too. A lot more people from high school recognize me than I recognize. Either I haven't changed much since then or I'm just totally oblivious...probably the latter.

Love your new cover photo and love that you just take off running wherever. I want to run through cows and goats. And I'm thinking of tapering to 6-8 the week before my half, just like Darlene. I only have 3.5 more weeks....getting excited.

I'm a little behind on blog reading as you can tell. I've never been to the Tunbridge Fair.