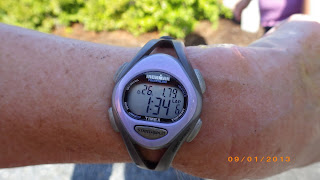 
I love love love doing triathlons.  I know you've heard it before but I've got to say it.  Love it!

I talked to two women before the swim today - one was 62 and the other quite young.  They also started doing tris in the last couple of years.  The younger woman couldn't swim before but is doing half Irons and considering a full so she's got it now. The 62 year old woman has also done halves and is considering a whole. 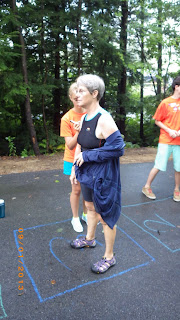 The weather turned out to be beautiful - sunny (humid but better than pouring) after a rainy Saturday.  There were 200 individuals in the race and about 40 teams. I think there were 10 waves and I was in the third one.  Yikes!  But I'm getting more used to fast swimmers coming up on me and I really like lots of bikers around so it's a fair trade. 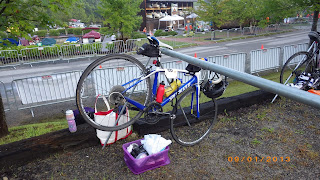 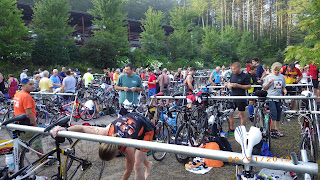 
The swim seemed long. I am sure the Mascoma one was too short as my time was so good at that and it was supposed to be 100 yards longer. Didn't look it or feel it.  Today felt long but I did about the same as last year so I'm guessing it was right.  I worked hard to have a better transition.  I probably worked hardest to improve my bike.  Last year I wasn't ever standing up and at this tri I decided I needed to learn.  Today I stood up a lot.  But man there were a lot of hills and some of them were steep.  There was one in 3 parts with little sections in between the steep parts that were not as bad and I was panting a ton by the time I got to the top. I stood some and sat some.  I am not the brave soul some people are on the downhills. I brake as needed.  When they tell me there are two tricky turns ahead on the downhill I proceed cautiously.  The bike was only 12 miles but my time was similar to the 14 mile one I do near home.  That's okay.  I could tell the run was not as good as last year. I didn't take the time to put my Garmin on and that may have been a mistake as I didn't know my pace. I tried to pick it up without much luck. The relay runners zipping by were a little irritating!  I didn't have that kind of energy at all. 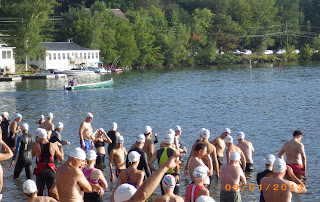 I am up front near the guy in the blue bathing suit.  I am up
front.  What? 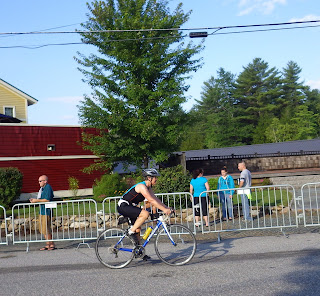 Heading out on the bike. I was actually having some trouble
clipping in here. 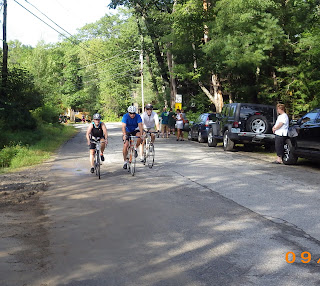 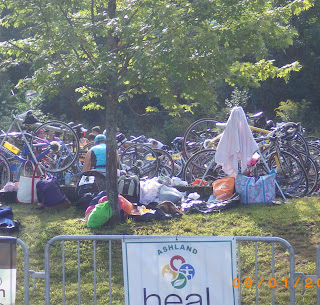 Sitting to get my running shoes on. Some guy threw his bike
down and got called back to rack it. He was also
leaving with his helmet on. I didn't see if he took it off. 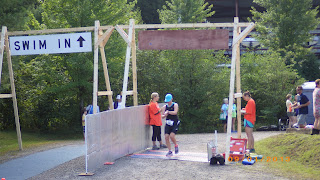 My friend is all set to get a good picture of me starting to run'
when I set the lap on my watch. 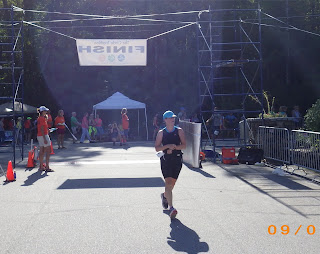 Completely done. Again with the watch! 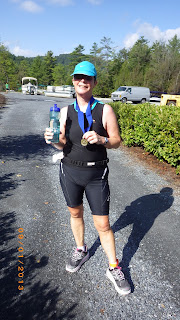 Thrilled to be done.

So here is how I did.
My goals.  Today's results in blue. 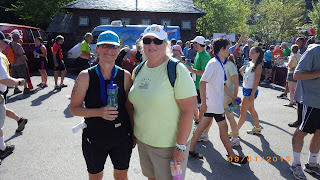 Kay is learning a lot about triathlons! 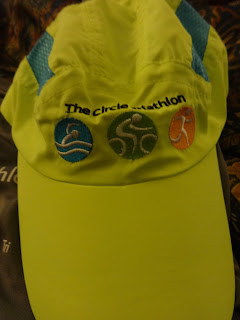 I bought the hat. 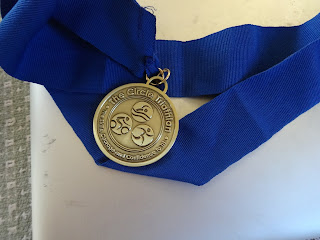 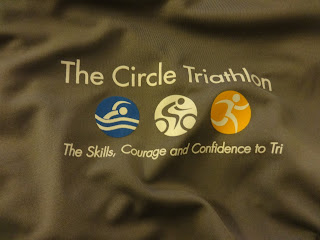 Not wild about the color of the shirt but so love the quote!

Congratulations. That's a great result. Your transitions are really improving and that makes such a big difference to your overall time. Pity they don't roll out the red carpet for T1 - that would help everyone.

Yay for a fabulous day! You look so comfortable on the bike - it reveals your bike love! I agree with Char - they do need to roll out the red carpet for T1. Looks like a beautiful area, as usual. Well done. Does this mean tri season is over for the year??? Boo-hoo.

Remember when you were doing your first tri and sooo worried about being dead last??

I love reading your tri reports bc the sheer joy just shines through. And you're doing SO well!! Congratulations on a great race!

Awesome! I'm with Kate, the joy and feeling of being alive shine through. I smile when I read your race reports knowing you are smiling while writing them.

Congrats. There was a tri in lake George this weekend.

I love love love that you love triathlons now! It wasn't all that long ago that you were so nervous about them. Look how far you have come! NICE JOB!

So much fun to do the same course again and see so much improvement! Great job!!!

The quote on the shirt says it all. You go girl! Your times were great! And I know you must feel over the top about your transition times, too. I don't think I'll ever catch the tri bug. I just can not get the hang of swimming and breathing. But I do love the bike and running.

I like the quote on the shirt too. Very nice improvement in transition times...that is part of the race too!

Congrats! You did a great job on ALL your goals! Way to go!

Fantastic! What a great read - well done! And i LOVE the t-shirt (another one for you big collection) :)

Congrats on a great race!! You improved a lot and had fun doing it. :)

So what you are saying is that you LOVE doing tri's?

Way to go! It really does sound like you found something you love. THere is something special about multisport!

Do I see an ironman in your future? You could easily do the run and the bike---and with your advances in swimming I have no doubt with some practice you could do that too.