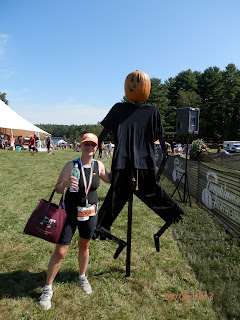 After the race with one of the many pumpkin men.

Wow!  What a fun, well organized, invigorating event this tri was.  It was my first new tri of the year and it is easily my favorite. I'll be back next year.  It was so much fun. The sad part was it's my last tri of the season.  This morning I was thinking I was okay with it but once I started the event I knew I wanted more. 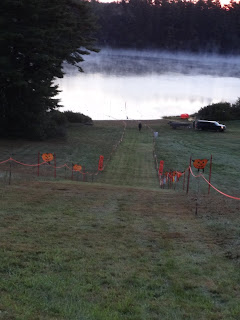 Looking down at the pond in the early morning. 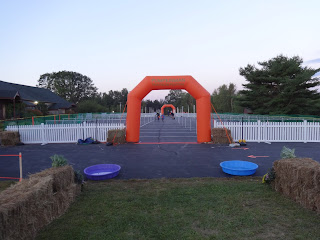 An empty transition in the morning. 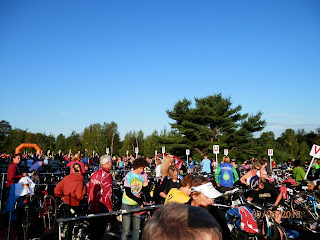 Not long before it's full.

The morning was cold - 46 degrees - and I wasn't sure how I would feel about jumping in the pond and then biking wet. I brought a coat to wear on the bike thinking I probably wouldn't wear it unless I was super cold.  We got there very early to park and pick up the race packet, fret in the car, hit the port a let, rack the bike, hit the port a let, and get on the wet suit.  I inspected the very steep hill that was the hill challenge  between the swim and the bike.  I studied the swim course and decided the pond was rather murky.  It was the cloudiest water I have done a tri in and yes there were weeds aplenty.  I have come a long ways as I didn't fret over this.  I decided I was in the fifth wave and there were many many swimmers before me. They would have scared any creatures away and I would be just fine.  The water was actually warm.  I did some  side stroke once I started which I don't think I've done since my first tri.  I did mostly breast stroke and very little free.  I really wanted to see where I was going. I always seem a bit panicked in the beginning but I did settle in somewhat today. I got around the first buoy and I could see that there were swimmers behind me.  As I approached the second buoy fast swimmers from the wave behind me were passing.  I did manage to catch and pass a pink capped swimmer from the wave before me! I loved this!  I did the swim in 12:23.  When I did the same length swim at Lake Dunmore I did it in 15:22 so I was thrilled with this time, a 3 minute improvement. I am never sure that the swim lengths are accurate but this race was pretty anal about so many things I have to think they worked hard to make it correct.  I was 377/463 swimmers.  My slowest event but far from last. 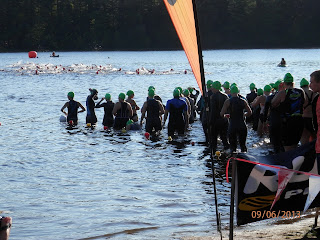 I'm about to swim.

Then there was the run up the hill.  Well it wasn't long before I decided running wasn't happening. It was seriously steep.  Now I wish I'd made up 12 seconds somewhere and maybe that was the place.  But my going up the hill was not pretty. 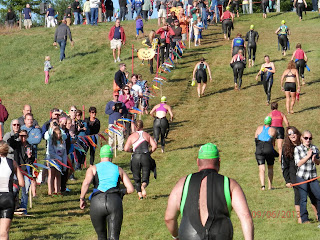 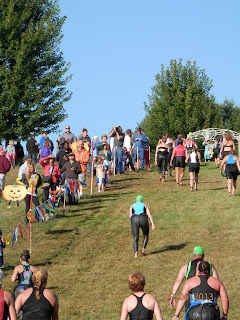 As I said seriously steep! 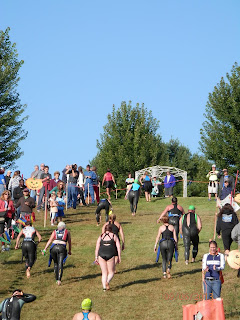 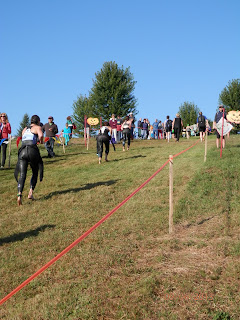 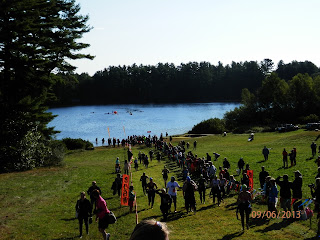 Looking back at the pond.

My transition time seems fast because the hill climb is separate from it.  I was still tired and the wet suit struggled a bit coming off the legs.  But I got all my bike stuff on and took off hoping I had remembered everything.  T1 2:52 (hill climb 2:08)  Together those are lengthy! 384 out of 463 for the hill climb.  Wasn't last!

The bike was 14.25 miles and there were a lot of people the whole time which I like. I passed a lot of people and people passed me too.  I am very motivated to pass on the bike. It was rolling with only one steep hill.  The roads weren't in the best conditions but I'm used to that from roads at home.  I loved the bike as usual and was watching for women with 60 on their leg to see if I could get by them.  There was a woman who was way out to the left and didn't move when I said on your left.  She continued to do this which was rather annoying and I am glad to say I ended up coming in ahead of her on the bike.  My bike was 52:43 which was a pace of 16.2. I beat 194 people on the bike and was 269/463.  I was thrilled to find this out. 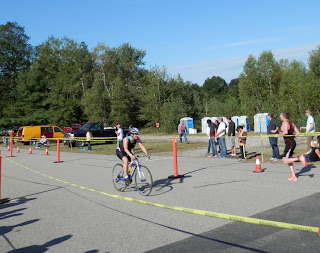 Coming in on the bike.

My second transition was a little slower than usual. First I went to the wrong rack. Note to self: pay attention to exactly which rack you are. There were these very helpful letters on each one if you bothered to remember the letter.  There were also specific numbers where you put your bike rather than anywhere on a rack. That was nice.  I thought the space was roomy.  T2 2:05. 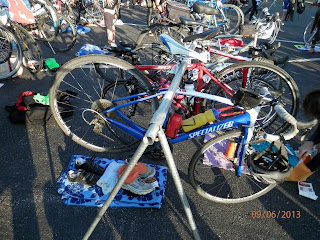 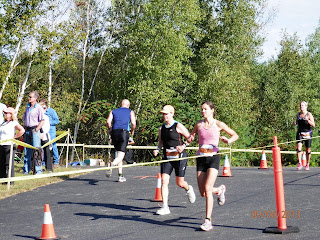 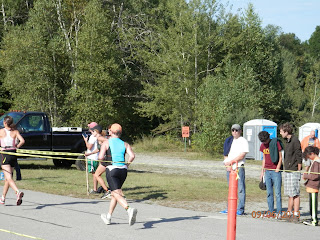 Both of these are going out on the run. 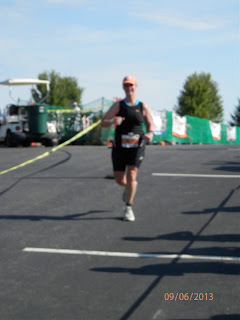 Blurry but I am happy on the run!

Oh yeah - I had to pee the whole race and particularly on the run it occupied a lot of my thoughts. But once I got done it was probably at least 30 minutes before I bothered to find a port a let.  As usual I was a bit juiced when I was done.  I had had so much fun. 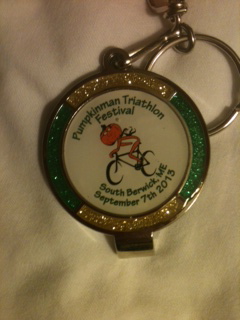 The medal is a can opener and can unhook for a key ring. 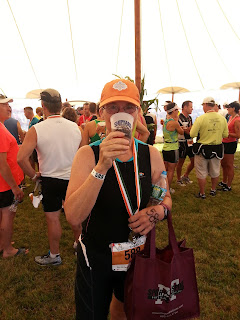 I don't usually get the beer after a run but it was
pumpkin ale! 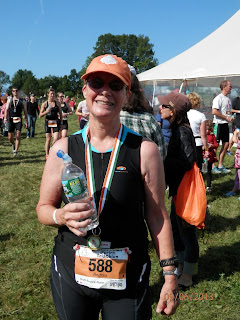 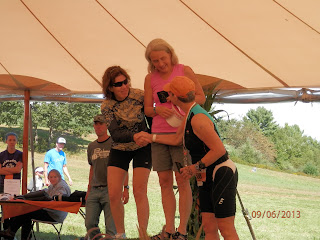 On the podium! I was third in my age group. There
were 7 of us so I guess that's middle of the pack. 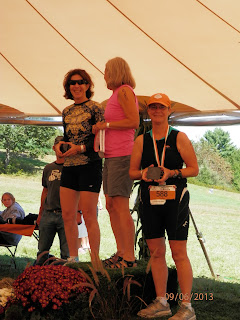 My overall place was 305/463.  My time was 1:40:11.  This is better than the Lake Dunmore ones which were a comparable distance in all parts minus the hill climb which makes this time even better for me! 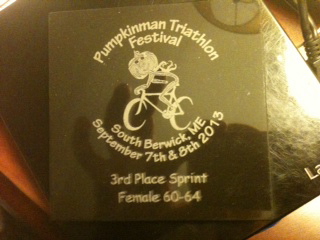 I love fall but hate that it takes away my favorite sport!  The feeling I have at the end of a triathlon can't be beat.

Awesome job!! Maine and pumpkins what could be better? I had a pumpkin beer last night too.

Wow - great race! And what is up with that hill?

What an awesome race! That hill looks so steep. Your bike speed is incredible!

Well done for another podium finish - you rock these triathlons every time! I LOVE the medal and all the orange colour of everything, looks like a great event.

WooHoo! Great job and a podium finish to boot!! Woot!!

Congratulations on an awesome race and placing third. Boy, that hill sure did look intimidating. And I would have probably been freaking out over the murky water. But then again, snakes probably weren't a problem in 40+ degree weather.

What a great time and result. Congratulations! And congratulations for doing so well despite needing to pee - that's really impressive.

Yea!! Congratulations! Your huge smile always makes me smile when I see your race pictures. Joy! And winning..even better! And yours was a legit AG placement...not a function of numbers like mine always are. Awesome!

I only did one tri this year, but it's clear I need to do A LOT more next year.

You are such a stud! COngrats on another stellar tri!

Congrats on your third place!!! And how cool that the medal is a can opener, that's the first time I've ever heard of such a functional medal.

Fantastic race! A great way to end the tri season. Congratulations on being 3rd in your age group: awesome!

Great job! I've had several friends do this race and they have all had good things to say about. Your splits sound great! Maybe that cold water made you swim faster! :)

and a podium finish to boot! congratulations! I have heard good things about the pumpkinman even all the way down here. Glad you had a great race!

Awesome! Congrats on the AG placement! I'm so jealous of you :)

Sounds like a fun race, but that run out of the swim looks awful. You are already breathing so hard from the swim, that would be tough.

RD who put hills in for a transition suck. Ha. I did one a few weeks ago with the same scenario - bleh.