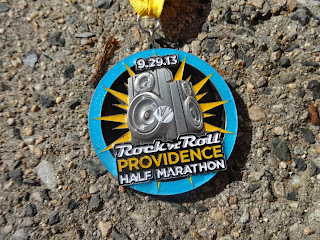 I did this race last year and enjoyed it a lot.  It was the first of many halves to come that I don't train for. I WAS training for the one last spring when I sprained my ankle so badly. I haven't gotten back on the training wagon since.  This didn't turn out to be my PW but it wasn't far away.  It was 5-6 minutes slower than last year.  My priority has been triathlons and biking. Before I raced today I was wondering if I still like halves.

The verdict is YES!  I do if they're low stress.  I may get back to working on my time but if I can relax about my much slower times I do have fun. Today was VERY low stress. I would run to the mile marker and then walk for a minute.  It made the miles go much faster.  Instead of thinking about how many miles I had left I would know a break was coming soon. The miles went by in a "fast" fashion. 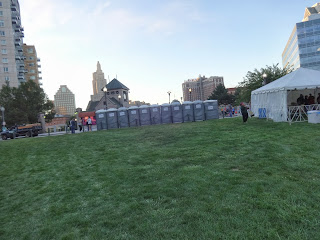 Lovely place to be during the national anthem


Providence has many cute neighborhoods and lots of nice college campuses.  I'm sure they plan the route through some of the nicer parts.  There were very few hills and nothing terrible. It seemed to me that we went down more than up. I wasn't sure how I would feel about doing this the second time but I liked it. I knew where it bogged down (that last winding around part) and there were parts I looked forward to.  I knew the bands weren't going to knock my socks off and that was okay. 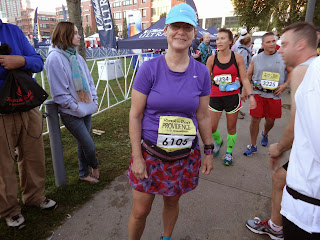 Ready to start in my NEW L.L. Bean skirt. 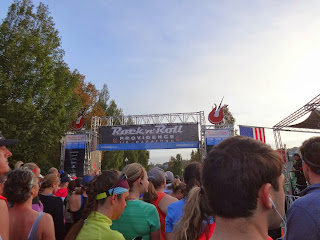 My wave has moved up and it's almost time to go.

A lot of the race was in the fog/overcast  skies today but then the sun came out.  Starting and ending at the state house is just beautiful. 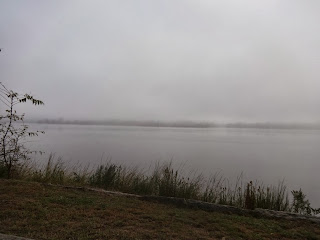 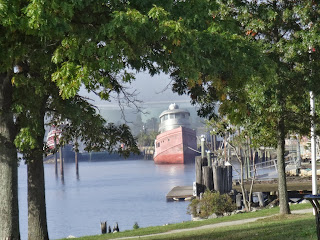 (the sun's beginning to come out) 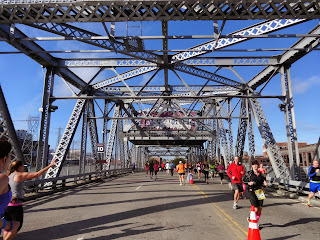 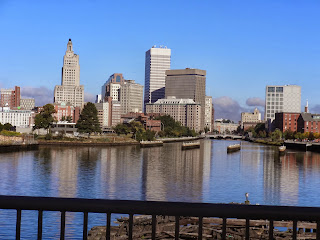 Scene from the bridge


A couple of complaints - not enough port a lets at the start. When it was time to start the lines were still long. I was IN a port a let when they were singing The National Anthem but nothing would have gotten me out of that line.  In the end they started late and I am guessing most people got there in plenty of time- especially with the corrals.

When it was time to leave the line to pay for parking at the garage was ridiculous!  Who feels like standing in a long line at that point?

I did use a port a let during the race.  I think that is going to be more normal in the future too. An old bladder!  I did wait to use one until there was no line and it did make the second half of the race much more pleasant. 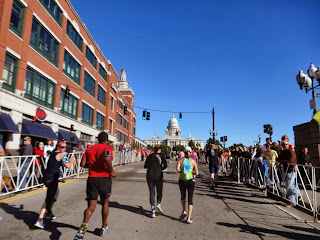 A bit of a steep finish 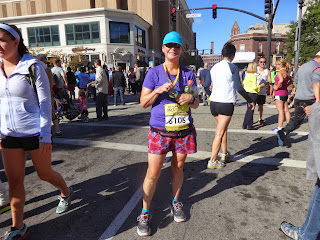 I didn't hang out much after.  I was with no one and I was ready to head home.  The food was not great other than the very cold chocolate milk they had ready.  I made one wrong turn in Providence on the way out (driving in cities makes me nervous) but my old friend, Mr. Garmin, got me straightened out quickly. I knew I had turned too soon but I don't have city nerves to make quick corrections.  Interstate 495 was pleasantly not too crowded either way.  I made a few stops on the way home but nothing too long other than to change my clothes.

I can't say enough about how beautiful the trip was both days.  The foliage in Vermont and New Hampshire is just spectacular.  I didn't take photos as most of the trip was on interstates but I took a quick photo when I got home.

I stayed with my cousin again who went to the Expo with me to pick up my stuff. She is constantly surprised that so many people like to run.  She is nuts about golfing herself.  While at the Expo I picked up my shirt, bought a pint glass, bought a fun pin and then bought a shirt I didn't need at all. 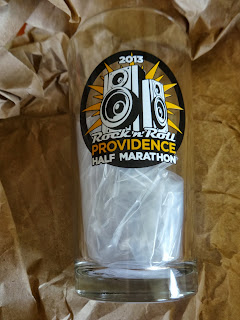 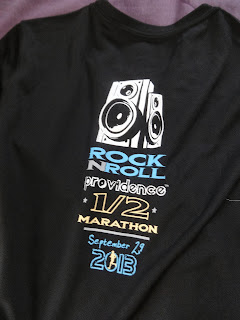 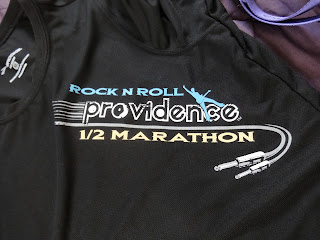 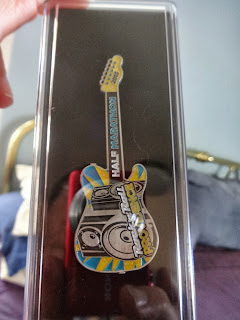 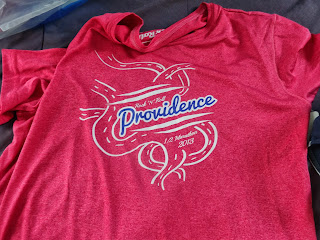 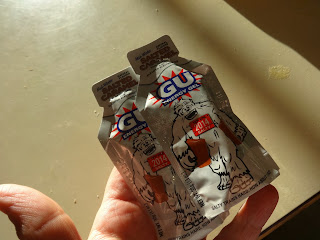 I also picked up some of these salted caramel gus which
I haven't had yet.

While I was at the Expo I ran into some Vermont friends!  They had come down the night before and even managed to get  a beach day in! 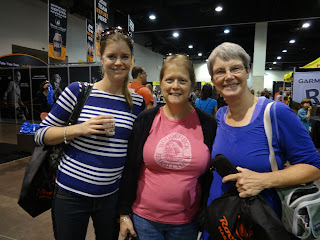 Elizabeth, Christa and me

Next Sunday I am walking with Christa's team Tutus For Tatas in the Making Strides Against Breast Cancer Walk.  I have done a better job than I expected with fund raising but there is always room for more. If you would like to donate to our team follow my link.  Christa is a true hero. She couldn't run the half today but she didn't just throw in the towel. She did the mini marathon/5K.  Christa is a fighter and I'm pleased to be able to do a small thing to help her in her fight.

I always think RnR puts on a great event (even if they are super pricey). I'm glad you had a great time and were able rekindle your love for the half marathon (my favorite distance). Yeah, RI and CO are two totally different places....but I don't know, we've had a lot of rain recently!! Ha.

COngrats on another half! I've been the same way this year....not trained for the halves I've done. LOve the swag but are those speakers?? Weird. Looks like a gorgeous day!

I'm glad you had a fun event. It looks like the weather was magnificent. And the scenery was the same.

There are never enough portaloos at events. And whichever queue you choose will always be the slowest-moving one.

Congrats on your great half Marathon! this is my favourite distance and I enjoyed your beautiful race report. Nice pictures have been taken along the running track.

Salted Caramel Gus! I have been hunting for those at running stores with no luck! I'm dying to try them. Looks like it was a beautiful race!

I hope next Sunday reminds me that I, too, like half marathons I haven't trained for. :) I'm jealous you found the salted caramel gu! I've been hoping to run across them.

Love all your pictures. Looks like a beautiful course. Great job finishing with a smile!

Sounds like a fun event! I think having fun at runs is more important than a perfect time. If you lose the fun in something you do, you lose the desire/willpower to train for it.

sounds like a fun event. I feel the same way about halfs.

Well done on yet another successful race! You are awesome! Great event for sure and your photos are superb, thanks!

I'm taking that GU flavor with me to St. George this Saturday. If you like caramel, you'll like it.

I like your colorful, new L.L. Bean skirt. Congrats on yet another marathon finish!

Your skirt is what rocked. Love it! Pics were nice too. I enjoy seeing sunshine in photos; we so rarely see it here. Great job on the half. Curious to find out what a salted Gu tastes like. Maybe a mini review coming soon?

Congrats for another marathon under your belt. The scenery from the bridge is wonderful.
You conquered an interesting loot!!!!

Sorry I didn't see you at the end. I love that they gave us medals for the mini marathon. It was such a fun day!!

I've had good experiences with RnR races, I've done 3 of their fulls. I always found plenty of porto's but maybe they put out more for a full?

I think halfs are a great distance, enough to challenge you but you can usually walk normally the next day =).

Sounds like you took the race strategy very similar to how I've been running, one mile at a time and short little breaks every mile or two.

Fall foliage here in the NW has been pretty amazing too--we have really been spoiled in Oct so far. Sept was the wettest on record and I'm happy to report that Oct (knock on wood) has been much drier! Great for biking and running...still too cold though for open water swimming...lol.