I got this from Jamoosh but it is originally linked from here.  Love these easy posts plus I always like reading them.


This is a tough one.   How does one pick a very best run ever?  Maybe I should pick my first run which was actually a race.  I was a walker who used to compete in races as a walker.  But this day there was only a fun walk. I am  a competitive person and it seemed like a waste of time to do this just for fun.  So at the minute the gun went off I decided to run. It was 4 miles, a combination of trails and roads. I ran the whole thing and was elated when I finished!  Then  I actually won second place in my age group.  I was hooked, continued to run races and never looked back.

Three Words That Describe My Running

This depends on the weather but mostly I like short sleeve tech tees and capris. I do have some running skirts I like.  I always wear a baseball cap or a headband.

I run outside in everything. I love rain and snow and like everyone else I like a good sunny day.  I don't like humidity and high heat but I will run in it. The one thing I won't run outside in is lightning!

Worst Injury – And How I Got Over It

I have had a few injuries.  The PF certainly lingered the longest and came back once.  There are many ideas out there about what to do for this. I got orthotics, I stretched, I rested, I rolled on a golf ball or tennis ball.  I iced. I did it all. But the thing that ultimately got rid of it was a cortisone shot.  I know these don't work for everyone and it's said that it just masks the problem but I have been PF free for quite a long time now. I do one day less of running than I used to with more cross training thrown it which probably also help. But the thing that irritates it the most is LOTS of walking like when I visit Em in DC and walk miles. 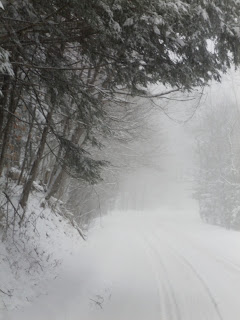 I go out in various weather but particularly the cold.  Cold doesn't bother me at least not enough to not run. I especially love running in heavy snowstorms except for when I step in potholes.

My running goal has become to continue to heal my ankle while being a smart runner and to get some speed back. 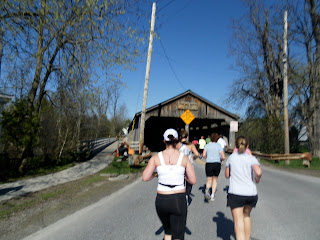 May 5, another half marathon that I am not prepared for. This one is very local and very hilly.  I'll try the run/walk thing again and complete it, maybe faster than my half two weeks ago!

Maybe next winter I won't sign up for so many spring halves.

Ummm...is this Andrea? There is no mention of bikes! :) I have a hard time with these (though I like reading them). It's so hard to choose what's the best.

Oh, and unfortunately no video or pictures of my gate mishap. And my words painted a poor picture of how funny it was.

You are definitely a badass runner and rider :) Good luck next weekend!!

I'm pretty sure that this weekend's half will be faster than your last. You've got a lot more running under your belt and your ankle is better than it was. And no one can deny that you like to compete.

I love to hear when folks don't care about the weather!

Easy posts are sometimes the best! I did the same one!

Um yeah, lightning is kind of a run killer. I've out run more than my share of lightning bolts. Yikes. Yay for badass all-weather runners. I will whine about heat way more than cold.