1. I HATE being injured and unable to run.  I HATE not knowing when I will be able to run again.  My ankle seems to have stagnated and no longer is improving.  Yesterday I tried biking on the trainer and it felt somewhat worse.  I am looking at 3 halves I have signed up for this spring.  The first one is mid April. I won't be able to race it but will I be able to run that distance?

2. I have organized all of my pictures in Iphoto.  It is a little embarrassing how much I enjoyed doing this. It was a little obsessive. I thought it would take me months and it took just a few days.  My computer's clock is screwed up so they are not chronological but they are organized into events rather well if I do say so myself.  I threw out well over 1000 pictures.

3.  I am looking forward to the Oscars tonight if I can stay awake. I have seen a lot of the films up for best picture which is unusual. I have two favorites.  Argo and Silver Linings Playbook 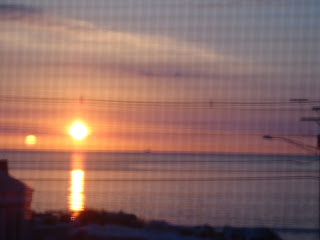 4. This is the sunrise which is pretty but I am taking this from my hotel room rather than as I am running along the beach beside it.  Somehow it was not quite the same. 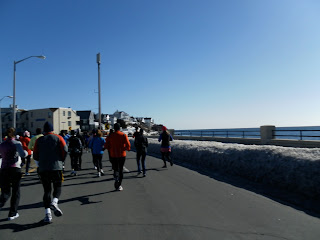 5. I usually do a half marathon in Hampton Beach this month but I didn't because the date was different or my vacation was. Well the race ended up getting cancelled because of the storm so I lucked out there.  It's a race I love but I may do the fall version one of these years.

6.  I seem to be looking at lots of race sites and thinking about future races. There is a half in Maine in the middle of July that is very appealing to me. But the idea of Maine traffic in the summer is not appealing.  There is a tri the same weekend (different day) that I wanted to do last year but then couldn't because of my wrist. The tri is closer and cheaper but I really like the looks of the half.  I have quite a few tris lined up in my plans so if I don't do this one I can save it for another year. The most appealing part of it may be that the swim is only 1/4 mile!  And the Shipyard Half has the best medal!!

7. Back to work tomorrow.  Ugh.  Within an hour I will be overwhelmed with stuff to do and it will be like we didn't have a vacation. It was good while it lasted.
Posted by ajh at 9:36 PM

For the first time in years I've seen a lot of the Oscar movies too. I loved Argo and Silver Linings Playbook. Just saw Lincoln yesterday and really enjoyed it as well. And there's a bit of an Australian contingent nominated this year - Hugh Jackman, Jackie Weaver and Naomi Watts. Should be interesting.

I'd only seen the kids' movies. Sigh. Sorry your ankle is being slow...hopefully you'll be seeing major improvements very soon!

Very fun to
Have lots of races to look forward to. My schedule is so thin right now. Definitely not as many race plans as previous years. Yet, anyway. I'm not as much of a pre-planner, though, so that's not completely out of character for me.

Good luck at school this week! I'm pretty sad about going back, too...no matter how long the weekend is it's never long enough!

Sorry for your ankle, I hope that you can get well soon. As a "professional injured" I can understand your feeling.
I like your attitude to plan many races; this is the right spirit to get good results.

This was the first year in a long time I enjoyed the Oscars. I thought Seth did great and I loved all the music :)

I hope that ankle sorts itself out soon! I can just imagine how many moods you are going through. Thinking of you!

The sunrise picture is pretty!!

I hate being injured as well. blah. Get well soon!

The Maine half looks tempting!

I'm sorry to hear you are injured, that sucks big time.

Hope you have a speedy recovery but take care, you don't want to make it worse.