Here are my 2012 Goals copied from my goal post in January. I tend to do a lot of goals so I always meet a fair amount of them! 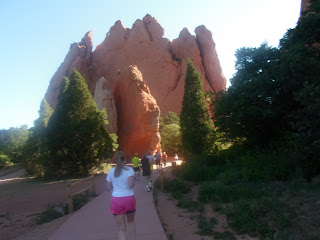 Garden of the Gods was a gorgeous but hard race.

1. I want to race in a triathlon.  My goal will be to finish it before all the volunteers have gone home.  I want to do at least part of the swim doing free style.  I would like to do at least two triathlons before the  season is over. Success!  I consider this goal met in style. In spite of a broken wrist before the season even started I competed in 2 triathons and can't wait to do more. I even got an age group award! 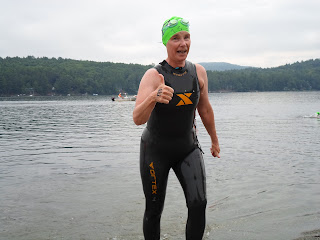 My happiest racing moment of 2012 - done with
the swim in my first triathlon!

2. I want to ride a new bike route out of my biking books at least four times. Success!I believe I did at least 5 new bike routes.  I love finding new routes and also ride the heck out of old routes. Again this was in spite of some time not being able to ride because of the broken wrist. 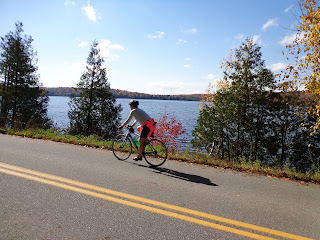 Taken on the most beautiful riding day of the year.

3.  I want need to learn to change a flat tire. Complete fail.   Can I blame it on the broken wrist?

4. I want to learn to ride with clipless pedals.Success and Fail! Yes, I learned to do this.Would I have broken my wrist if I wasn't clipped in though?  I did get back in the saddle and continue to ride with clips after but I must admit I have a whole new respect for what can happen and unclip when I approach anything remotely suspect. 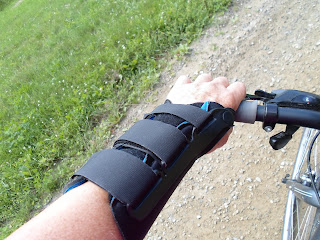 Biking was the last thing I was allowed to do after my break.

5.  I want to ride a century.  This past summer I reached a new distance of 62 miles.  Next summer I want to get all the way to 100.Fail!  I do think this would have happened - yes without the broken wrist.  I had a good momentum going when it was completely disrupted.  I did increase my highest mileage to 78 miles which I am proud of. Believe me this one will be back on my goals for 2013. 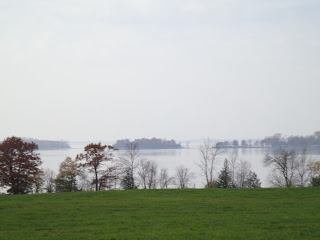 6. I want to take swimming lessons to help my "technique" if it could even be called that. Success and Fail! I took them.  I took two sets, one in a group and one individual.  I can't say my technique improved a whole lot though so hence the fail part.
7. I want to race in Central Park (hopefully with Darlene.) Fail.  I would still like to do this.


Repeating but want to keep them goals

8.  I want to work on my speed by improving my times as the year progresses.Fail.  I got slower by a small amount in 5Ks but half marathons improved.

9. I want to race in at least 4 new races.Success. I raced in 8 new races.  This is an easy one for me as I love trying new races. The triathlons were my favorites but I also did two new races that were 10 milers - Cherry Blossom and Garden of the Gods. 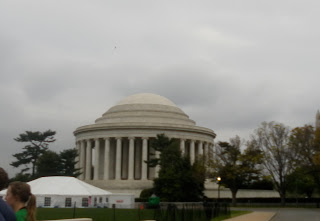 Running by the Jefferson Memorial in a race = happiness!

10.  I want to compete in at least 4 half marathons.Success. I raced in 5 half marathons.  Rock and Roll Providence was a new one and I am already registered to go back next year. 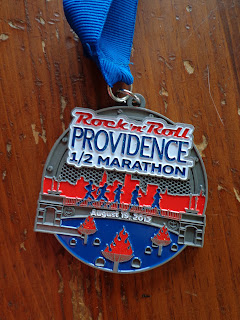 11.  I want to place in my age group..Success. I did this 4 times including 2 triathlons.  And next summer for tris I will have aged up! 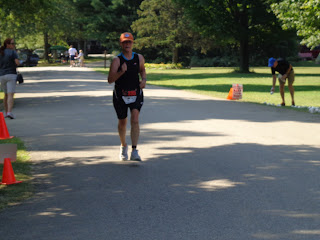 My husband comes to see me in my second triathlon!

12. I want to be in the top half of the field..Success. I did this 6 times and am often close.  It's a goal to keep working on for sure.

13.  I want to do a race a month. .Success. I raced fewer times this year but I did race every month.  I raced in early July in my splint but I raced. 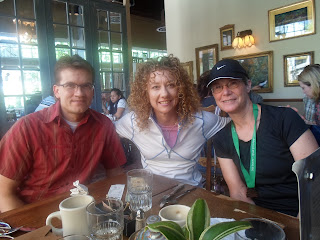 Always love a meet up with Happy Trails. 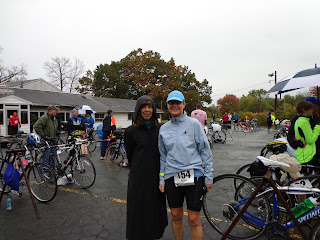 Darlene comes to see me on a very cold and wet day.

14. I want to meet more bloggy friends..Success. If you take the word more out it was a success. I got to see Happy Trails AGAIN at Garden of the Gods and Darlene AGAIN at Towpath Duathlon.  Loved seeing them all again. 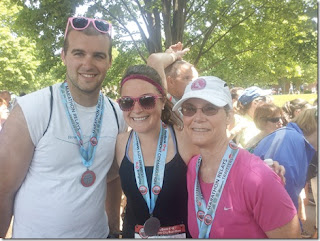 This race with both my children was an incredibly fun race! 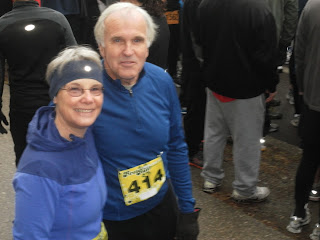 Hubby and I will be racing this one again tomorrow.


15.  I want to race with my family..Success. I raced in 5 races with family members.  First Run with my husband which we'll do again in a few days.  I did Shamrock Shuffle with Jameson, Cherry Blossom with Emily and Vermont City Marathon and Garden of the Gods with both Emily and Jameson.

16. I want to race near the ocean..Success. Truly this was less than usual. I only raced near the ocean for Half at the Hamptons which I am quite sure I am not doing in 2013.  They have changed the weekend and it doesn't work.  But I have found a different race for the right weekend although it is a much shorter race - an odd distance so PR for sure.

17.  I want to do scenic races..Success. Most of the races I do are scenic with a few being not as good. Garden of the Gods was spectacular as was Half at the Hamptons.  Cherry Blossom was great even without cherry blossoms. All of the Vermont Halves are really nice - VCM, Unplugged Half and The Sweetest Half. I highly recommend any of them.


Whew. No great ideas for 2013 goals other than repeats, continuation of some of these.

It looks like the goals that you accomplished, you not only did that, but you crushed them. So the others will simply carry over to the new year with hopes of being injury free!

Your goals inspired me this morning, I'm so happy I checked in with you! I love it that your'e racing with your husband and your it's exciting to see all of your goals that you've met this year...it's only going to get better!
Happy New Year!
meg

What an awesome year you've had! I've enjoyed following along and reading about the excitement of becoming a triathlete.

You are such a wonderful inspiration! On these recent cold, gray mornings, when I looked out the window or checked the thermometer, and wanted to snuggle down in my warm bed rather than run or ride, I have thought of you - hardcore and dedicated to the MAX - so no slacking because I know AJH wouldn't be slacking and out I go!!! :-) You had a wonderful 2012 and am hoping that 2013 brings more fantastic adventures - new and old. We consider it an incredible blessing to have been able to meet you and count you a friend - you are a very dear and special person. Who woulda thunk that such good things could come from virtual blog world??? Happy New Year!

What a great year in spite of your broken wrist. Let's find a race in Central Park for the spring.

I love your goals...I can totally relate to them...well, except AG placing and racing with my family. So cool that you can share your running and biking with your family.

You had a great year. I know the broken wrist was painful and stressful, but it barely slowed you down. I'm constantly inspired by what you accomplish despite a crazy busy schedule. Can't wait til the day we get to go for a run or ride together!

You had a fantastic year, even with that dang nabbit broken wrist! You are one of the best goal setting bloggers I know and you work so damn hard to achieve every one of them. 2013 will be a fantastic year for you.

I hope if you make it to Colorado again soon we can meet up. And I'm still working on a way to get to Vermont one of these days :).

Your year was a huge success despite that broken wrist. And this year will be even better now that you've found your new triathlon passion.

I was just reading a blog by one of my squad friends. She was in the States last year and ran The Garden of the Gods - the 5k event. She even managed to place. It's so funny to think that you were both in the same place at the same time.

You had such a great year! So many goals accomplished- you should be very proud! I hope 1st run was fun, I had a great time when I did it a couple years ago. Happy New Year to you! and best wishes for an amazing 2013 :-)

What a great year! Glad you were able to get past the broken wrist and still achieve most of your goals. If you ever want to meet up in DC for a run or something, let me know.

Congrats on your great goals!
I look forward to following you in 2013!

Andrea what a fantastic year, you've reached so many of your goals. Well done!