The scene:  Nubble Point Lighthouse on a sunny morning 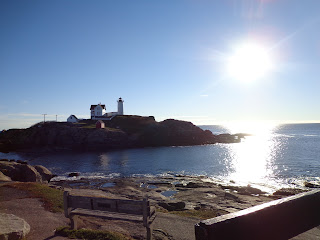 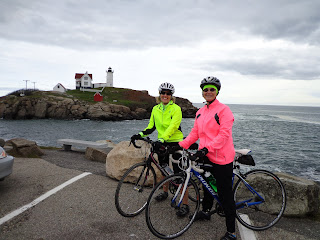 The Action: Riding a bike around to get a picture with Nubble Lighthouse in the background 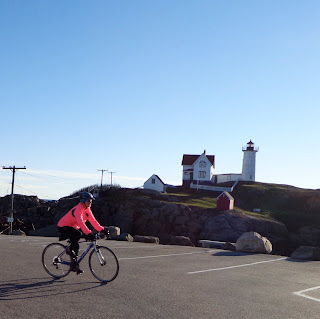 So where's the terror? 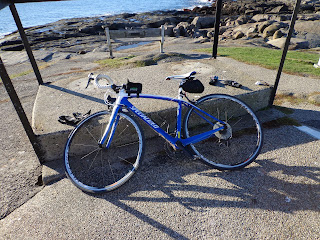 As I was taking Cathy's picture I propped my bike on this cement block.  (Hmm, that's not very scary.) 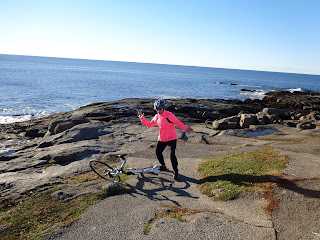 This is the scary part. The wind caught my beloved bike and the next thing I knew it was headed down the cliff, over the rocks, straight toward the ocean.  Between gravity and momentum I was sure it was headed into the ocean.  It was probably really only 5 seconds or so as I think in 10 it might have gotten there but I saw it going and screamed.  Scrambling over rocks to get it in clip  bike shoes is not an easy process. Thankfully it tipped over and stopped.  My camera and phone flew out and hit the rocks but they were okay although my heart was in my throat over concern for my bike.  Nothing was wrong with it.  The pictures are a terrible job of a  reenactment.  I had already moved it back up as fast as I possibly could before "blog story" popped into my head and the camera came out. Some of you may remember I broke one camera in this exact spot last April. 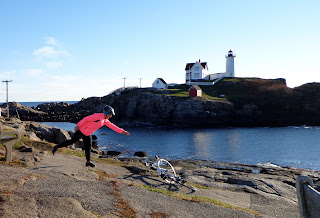 I've told this story a few times and haven't gotten much of a reaction.  I can't tell you adequately how I felt as that bike was headed to the water, not shallow water but a drop off at the bottom of all the rocks. But fortunately all was okay and I continued on my ride!  I can easily say my bike is my favorite "thing" I own!

Oh my gosh!!! If you didn't get much reaction you were telling the story to non bike people! The good news is that bikes float...but oh man the fear of losing it...that's what we get for having these light bikes, huh? I guarantee my 1000 pound mountain bike wouldn't go anywhere. :-)

Geese! I would have been framing out. So glad is stopped on its own. Do bikes ever get possessed?

I'm glad it all ended up okay. And I have to admit to wondering momentarily if your camera was okay - until I realised that there were perfectly good photos right in front of me.

That is scary! Like Kate said, you were probably telling the story to non-bike people who think you are nuts for biking in the cold and so far. That's one reason I blog. Most people I know don't understand the endurance sports thing. Glad your bike is ok.

Oh no, oh my! I would have freaked out if I saw my bike rolling down toward a cliff, wall, anything not friendly! Glad it turned out ok.

Oh my, I would have freaked out too and am glad it didn't end up in the ocean.

That is certainly terror! Glad all ended well though. That would have been some story if the bike ended up on the ocean floor.

Glad you and your bike are ok. I need to blog about my trip to Maine and Nubble lighthouse

Love the reenactment! Glad though that both you and your bike were safe :)

I would have freaked!

That is scary. Glad your bike is ok and really glad you didn't fall and break something.