My two runs this weekend were VERY different than usual  all due to this guy. 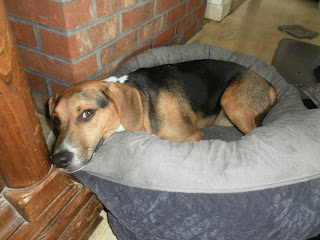 Jameson is off to NYC and he asked us to babysit the grand dog.  This is the first time Jaxon has come to stay on his own so I wasn't sure what to expect. The cats were less than thrilled. Things calmed down but Jaxon did spend time in the kennel. I took him for rides to get him out of the house and other various things. Saturday I planned to take a run with him and Jameson said he could easily go 4 miles.  Perfect! 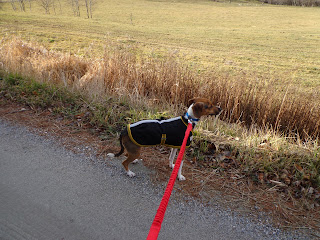 So off we went. We went down the driveway and went left although we didn't go too far because Jaxon refused to go too close to two yapping dogs.  That was okay because I wanted to stay on the dirt road and it goes farther in the other direction. So we turned around and headed past our house and kept going.  The next time he refused to move was when we were going by the chickens. He didn't like them at all and I actually had to carry him.  Once by though I set him down and we were once again on our way. 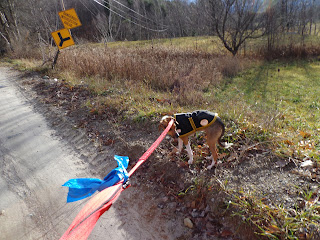 I could tell he wasn't thrilled with the cows we went by either but it was mostly a tail tucked between his legs and  a hurrying by, not a have to carry. 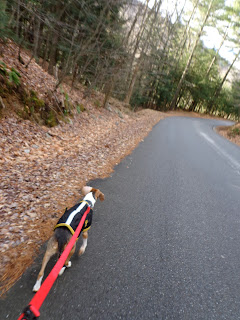 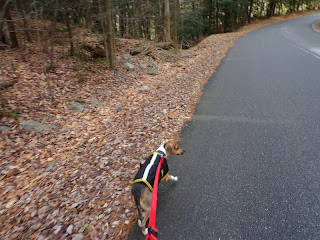 Then we headed down the steep hill which I usually only go a short ways down. But Jaxon was eagerly moving forward so onward we went.  I thought I would be in trouble once we had to go back up as this was one seriously steep hill but he headed right up it, past the scary dogs (hitched but scary) and back toward the cows.  He went by although still not thrilled. 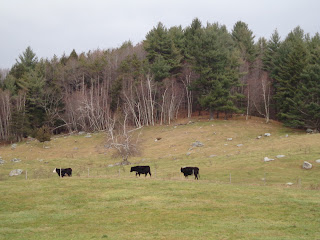 He is such a city dog!  The chickens were quiet so no problems there and before we knew it we were back home with 4 miles done.  He was exhausted and went to sleep right away so the cats were thrilled.

Then came Sunday.  I waited for it to  warm up some and off we went. Well we went a VERY short ways when he refused to budge. So we turned around and went past the house when again, he refused to move. I wasn't sure if it was the cold or he just didn't want to do the whole damn run thing again!  But we went back home and I took him off the leash.

Then I proceeded to run 4 miles around my yard!  Yup!  4 miles around my yard. Jaxon chased me and "let me" throw a stick for him and generally was quite happy with this arrangement.  I would head down the driveway at times and out to the edge of the road but he would wait at the top of the hill. No way was he coming down the driveway and going on any run with me again. 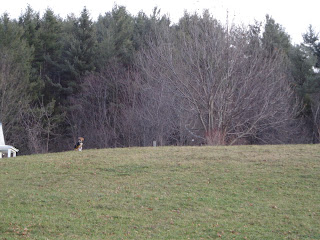 Waiting patiently at the top of the hill

So I did get in my 4 miles each day but it was not fast and it looked like no other run I ever did. I don't think I would do well on trails as I even found running around my yard a bit of a challenge.  I also had to dodge horse poop and frozen bumps which didn't help at all.

But now Jaxon has gone home and I miss him!  Who ever knew I could love a little  dog so much?

Oh, you'd get used to the trails! Funny how things bothered him. My dog isn't afraid of anything -- cars, skunks, other dogs -- much to his potential detriment. He does make a good running partner, though.

Back to school tomorrow. Sigh.

How funny! Don't you love the personality quirks of pets!

How fun! The beginning of your post made me think of an episode of the Dog Whisperer a little bit. Good thing you got him to go past the cows, chickens and other dogs, though. He was probably eager to get home!

Loving a dog more than most humans is perfectly normal behaviour. Isn't it??
Jaxon is wise to be scared of chickens. Sometimes they can be mean and nasty.

LOL at Jaxxon, he's so cute.

I never run with Bella, she's distracting me and always running in front of my feet.

Funny that you miss Jaxxon, I missed Bella yesterday when we left her for her sleepover at my Mom. It's so weird being at home and your dog is not. I also missed my daily walks with her.

I love this post! Jaxon is such a fierce dog, afraid of chickens and cows, lol! Too, too good. I can't believe you ran four miles around your yard. You are totally dedicated. P.S. My own "fierce" dog stole the neighbor's frozen Safeway turkey. Maybe she needs to spend time with Jaxon?

Dogs quickly get into your heart don't they? Mokey would sometimes refuse to run. Jaxon just needs to get use to running in the country.

Dogs quickly get into your heart don't they? Mokey would sometimes refuse to run. Jaxon just needs to get use to running in the country.

That is too funny! I have been meaning to take Nova out to see if I can train her to be a running dog but I'm sure she wouldn't be able to go too far with her short legs. Delilah has never really been much of a running dog but we did do a couple 2 mile races together.

Poor Jaxon IS a city boy!!! Sad. He needs to spend more time with his gramma, which sounds like she'd love, and de-citify the poor boy!
I also believe there is a trail-runner wanna-be deep down in your bones!!! :-)

Jaxon is such a cutie!

Oh dear, it sounds like trying to take a toddler for a walk! It's pretty clear you're not the one in control. Well done for running round the yard though, good going!

Haha I love that 'city dog' was scared! Good for you for having the mental strength to run around your yard. No easy task!

jaxon!!!! Zoey is a terrible runner, beagles are known for following their noses so it makes them bad running buddies.

I wish Zoey and Jax could have a play date I think they'd get along nicely.

he is too funny! so afraid of the chickens but slightly braver to go by the cows. and then giving you a workout around the yard. too funny.