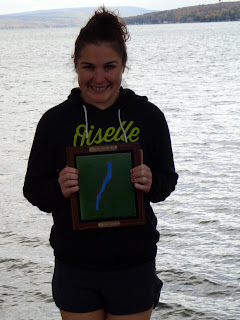 Emily with her plaque - the lake and race course! FIRST WOMAN!

This past weekend I drove to western New York to watch Emily in her first 50 miler.  She KILLED it but more about that to come. 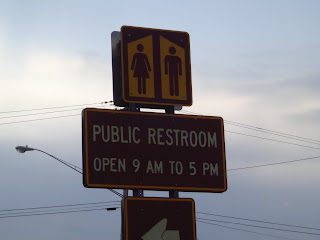 It was a pretty day when I drove over but I definitely went through parts of New York I have not been in and man were they remote. I got a cup of coffee in New Haven, Vermont and did not find another good cup for hours. One problem though was that I also could find no bathrooms and I had had that one cup!  Driving though parts of the Adirondack Park is unreal - no anything!  I was beyond thrilled to finally reach a town and find public bathrooms in a local fire station.  Yes, a local fire station. There were 3 other cars there so I don't think I was the only grateful motorist.

But I finally arrived in Rochester, NY where I stayed with someone Emily knows through running.  She and her family were  wonderful hosts!  Em and I went and got her race stuff and returned "home" for a pasta pre race dinner.  We were up dark and early the next day at 4:00 ish to a downpour!  Emily packed about a thousand things she might need and we drove about 25 minutes to the race start.  It continued to down pour and it wasn't exactly a balmy temperature either.  It turned to a drizzle before the start but of course everything was soaking wet.  I started my day of finding the aid stations and trying to anticipate Em's needs. It took a bit for us to find our groove but we did. It worked best to stop, run out to Emily, find out what she wanted and drive ahead and have that item ready for her.  She would often say in two miles or whatever distance she thought would work.  I would go as close to that distance as I could with finding a pull over spot.  Everything had been organized in the car but it didn't take long for that to  dissolve. 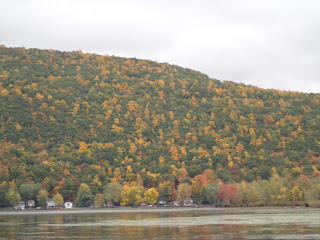 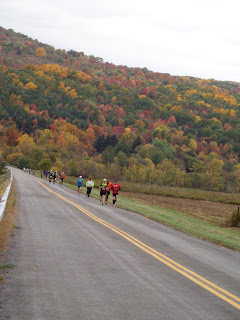 Emily in blue running with some of the 50K runners. 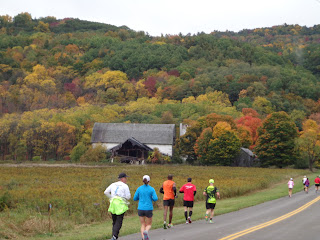 She also had me tweeting, something I don't do and it also took me some time to remember to do it and to find my groove for that as well. Once I did it was rather fun and I was also trying to put some stuff on my Facebook account.  But we did find what worked for Emily as a racer and me as a "handler."  It was a great race as you could drive most of the course and really help out and see your racer.

I had a hard time knowing what place she was in as some runners had started early and then at 10 all the 50K runners started and were intermingled with the 50 Milers.  I did keep seeing some of the racers over and over. There was one guy in a bright green shirt that was a ways ahead of Em so I when I saw him I knew about it would be  a bit before she might be coming.  That didn't always work. One time I was reading when she ran by and tapped the roof of my car. I thought I had a lot of time before she would get there.  I was always amazed at how quickly she kept coming.  I had thought of bringing my bike and riding the race course. I'm glad I didn't do that as I had all I could do to keep up with her in my car. 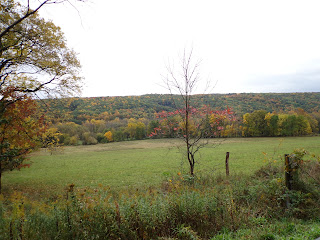 She's pretty much on her own now, this is one of many hills. 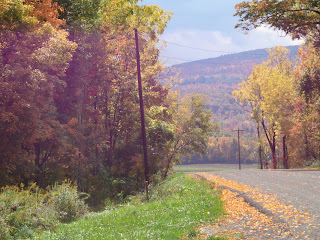 I found myself eating her junk food as I waited. I didn't think she was eating enough but she explained her plan to me after the race when I mentioned this and she certainly did have it under control.

At some point (in the 30s?) she told me she was the first woman.  By this point she was running alone most of the time.  Once she passed 35 miles every step was  new personal distance for her which was awesome.

The last ten miles were amazing.  She dedicated each one of them and had me tweet who she was dedicating them to to help inspire her to keep going strong.  I would barely get this tweeted and get to the next mile before she did.  I know that my daughter is a strong racer but yesterday I could really see it myself. I watched her just get faster as she neared the end of the race. I watched her having an amazingly positive attitude in spite of crummy weather for most of the race, unbelievable hills and 50 miles of running.  Well, not just running, racing!!! And I do mean racing. I loved watching her pass people in those last ten miles.  She did it again and again and again.  That guy in the bright green shirt that had been way ahead of her.....history!  And she was smiling and appearing strong throughout these ten miles.  Then she met up with a friend from DC who was doing the 50K.  The two of them were chatting and appearing to have a great time.  Chatting after 45 plus miles?  Smiling?  Both of them were awesome!  When I drove ahead to get to the finish line there was one more guy in sight ahead of Emily.  I almost missed her at the finish line because I was watching for him. Well surprise or really no surprise, he was one more guy whom Emily breezed past to become the top woman and third racer overall!  In her first 50 Miler!  She was shooting for 8 hours and killed it in 7:34: something! Wow! And she didn't appear dead!  What a race! What a day! 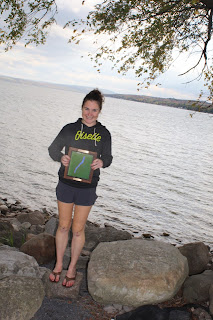 Congratulations to Emily! That is not the easiest course with the hills, and she did amazing!

I live in Rochester and my husband and I were married in Canandaigua at Kershaw Park's gazebo.

I always love reading your recaps about Emily's races! You are one proud Mama! Emily talks the world of you and it's so easy to see why! Congratulations to both of you!

What a great athlete she is! But what a great mother you are. I almost think you had the more complicated job of both of you. She only had to think left, right, left, right, eat, drink, left, right. You had to find her, feed her, tweet, Facebook, then do that all over again.

And about the toilet thing - one of my best memories of my US trip was drinking a giant sized diet coke on the way out to Yosemite NP then not being able to find a toilet. Having to hold it all in can cause physical pain and sweating and post-traumatic stress that has you waking up from bad dreams of needing to go.

That is AMAZING! Congratulations to Emily! I think she's only just beginning to find out how incredible she is. And YOU...you're such a great mom. It's not an easy job to run support for that long, and then also juggling all the social media and finding your way and all the extras...great job to you, too!

One of my Virtus teammates lives in the Canandaigua area.

She is SO amazing! Where is this leading her? Does she have thoughts about even bigger things to chase after?

Wow, that is amazing! Emily crushed that race and what a great feeling it had to be for you to crew for her. Living life to the fullest for sure. Loved all the pictures, Emily looked great, specially at the end. You raised a strong woman for sure!

Awesome race for Emily! Really, really amazing. She worked for it, too, put in all the miles and hard runs. But also congrats to you for being such a great mom and race support (!!)

Wowzers!!! A BIG congrats to Emily - what a tremendous accomplishment. And what tons of fun for the proud mama - you realize she got half of her super talented athletic genes from you, right???!!! The talent and "can-do" attitude runs in the family! :-)

Wow! congratulations to Emily - that is amazing! She is quite an inspiration! It's so nice that you got to go out and see her even though Rochester is not really right next door for you. And I hear you on the coffee and distance driving dilemma...

Thanks so much for your messages about the book, too - I've sent you an email in reply!

I followed some of your comments on Twitter, and I couldn't believe it when she finished 3rd overall! Just incredible. She is a great athlete and inspiring. I'm sure she couldn't have done it without your support - you must be so proud!

Congrats to your daughter ... you can be proud of her!
Beautiful report and the photos show a running path through a wonderful fall landscape.

We have the same problem about coffee: when we cross the border from Italy to Switzerland we can't find a good cup of coffee!

What an amazing support crew she has!


I think I may have cried about not being able to find coffee...good spectating requires copious amounts of coffee.

Congrats to Emily! What an accomplishment! I cannot imagine running a 50 miler or being the 1st overall woman in any race - you must be so proud :)

LOL "she didn't appear dead" - always a good thing. congrats to emily!! she's had quite the success already at ultras this year!

Wow that is just amazing!! She did FANTASTIC!! Congrats to Emily!

What a beautiful race!! Very impressive run by Emily. I'm sure she appreciates your support too. I enjoyed your tweet updates.