I got this from MCM Mama.  If you haven't done it join in. 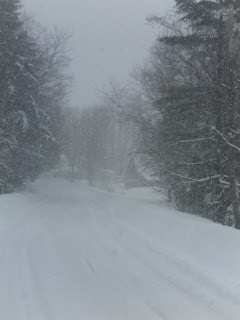 I love running in a snow storm.
1. Best run ever:This is a tough one.  I would have an easier time choosing a best race ever.  I'm sure it's a run that I did on a vacation such as running around Stanley Park in Vancouver or one of my many runs on the beach in the Outer Banks.  One of my best runs ever was during a race because it was the first time I ever ran! I was shocked and thrilled that I could do the distance.  So I'm not really answering the question other than to say I have had lots of good runs.
After all that I am choosing a run I do often near my home BUT I don't get to do it very often in the middle of a terrific snowstorm on a snow day from school.  Last winter I didn't get to do any of these runs (no snow) but I LOVED this run on a very snowy day. It was the snow, the storm and me out there! Nothing better. 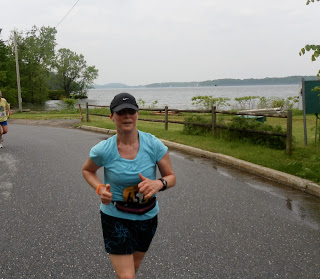 If I didn't race I am not positive I would keep running. 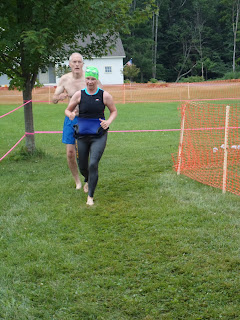 I am even doing it while running in a wet suit.

4. Quirky habit while running: I hold my thumbs up like I'm hitch hiking. I have noticed this in pictures far too many times but never seem to think to not do it while running!
5. Morning, midday, evening:  I greatly prefer morning although when I am working this rarely happens.
6. I won’t run outside when it’s: lightning. I will run in almost any weather.  The worst weather I have run in was a northeaster and I realized it was incredibly stupid as trees, power lines etc. could have blown down on me.  I don't run in the dark near home but will drive to a place with street lights to run.
7. Worst injury—and how I got over it: My two run stopping injuries have been my piriformis and plantar fasciitis. I haven't had problems from my piriformis in a long time and this weekend driving back from New York it hurt! Yikes.  I do think stretching have helped both and I haven't been doing that lately.  Yikes!  But these injuries got me biking and then swimming so it is all great! 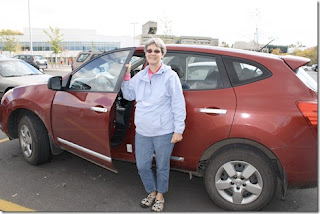 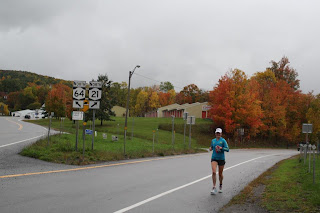 8. I felt most like a badass mother runner when: I crewed for Emily at the Can 50 this last weekend!

9. Next race is:  this weekend in Half Moon New York -a duathlon where I get to race on my bike again this year!

10. Potential running goal for 2013: Last year was the big goal of doing a triathlon. I don't have a new goal like that but I want to do more and more and more triathlons and go back and do some of the same ones and improve my times.  I want to stick to sprint distances but maybe choose some with a bit of a longer swim.  And then maybe not. Is this a running goal?  I want to continue to race and enjoy it but my focus will once again be triathlons. 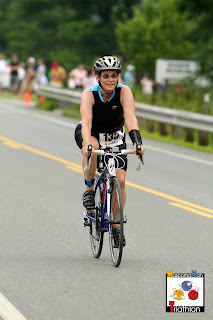 Any race that lets me race on my bike is a good race.

What a great post! I'd have trouble choosing a best run, too, though my last rainy one was pretty awesome.

Great post. It's always so obvious from your writing how much you love running and tris. This post is no exception.

I enjoyed reading this! It is encouraging to be reminded that you also suffered with run-stopping injuries and came back so strong - it gives me hope!

And I never noticed the thumbs up habit you have...I'll pay attention from now on ;-)

Great idea...love reading this!
I don't like your snow pic though...so not ready for winter.

Very fun to read Andrea. Thanks for sharing.

I do the thumbs up thing too. see you on Sunday!

You've inspired me to want to get out and run in a snow storm. Now we just need to get some snow this winter!

I'm not sure I can agree with you about running in the snow... You have had such a great experience with triathlons this year. You've acheived so much, it must make it difficult to come up with goals for next year! Have fun at the duathlon!

Nice! I'm amazed at how the triathlon bug has bitten you. You seem to thrive just thinking of them. You are an inspiration!

Of course I had to check and make sure you actually hold your thumbs up when you run and you totally do! That made me laugh, we all do some funny stuff...it seems like you're always smiling though!
SNOW? Ah! Chicago was WAAAYYY too cold for me.

Yes, I've seen season 1 of Revenge and I love it. Next week season 2 starts here in Holland, going to watch that too.

piriformis is evil, glad you got over that one!

Cool list! I love running when it's snowing too and running while it's lightning scares me.