Today had to be one of the most perfect days ever.  The temperature was perfect, not too hot or too cold.  The fall colors were still glorious.  I had a friend to ride with and great roads to ride on. Bliss! 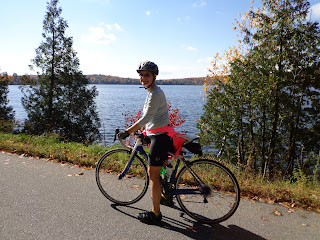 I had thought I was going to ride 30 or so miles today.  I didn't do the ride I was thinking about as it was around 50 miles and it's been awhile since I went that distance.  But then Cathy texted and she was heading out. I couldn't resist even though I had a million things to do today.  There are not going to be that many wonderful days left in this biking season. 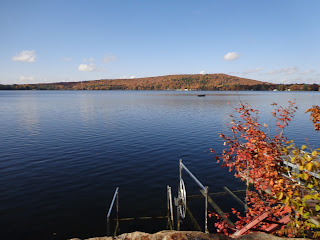 We ended up biking 65 miles which is actually the farthest I have gone at one time.  This year I had not gone beyond 50 miles. Last year one ride was 64 so when we finished today I made sure to reach at least 65.  I was surprised at how good I felt at the end of it.  I was tired but by no means dead. 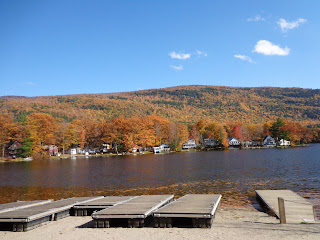 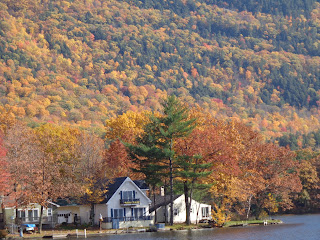 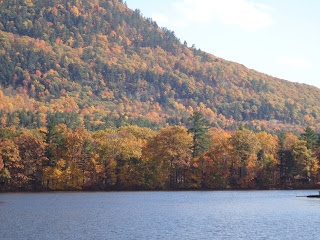 We almost did a loop but ended up repeating about 3 miles. It was the prettiest 3 miles of the ride so no complaints.  I did a fair amount of standing up going up hills. This has never worked for me but today it seemed to click.  Why did I start doing better at this after racing season?  I felt like our pace today was good but not exhausting. I know Cathy could have gone much faster without me and I appreciated her holding back. 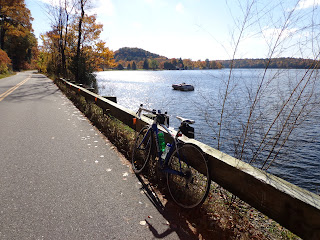 All of these pictures are near Lake Dunmore which is where I did my second triathlon - the one I trained right there for. It is a great lake and a beautiful spot. It was really nice riding around it today as there weren't a million people and the roads were empty except for other bicyclists.

Earlier on Thursday after school I had another great ride.  We headed out toward Lake Champlain but didn't do the usual route as we had to pay attention to what time it would be dark.  The farmers were hurrying to get in their corn and there were lots of huge trucks and machines going past and the roads were a mess. So that part wasn't good but the ride still managed to be wonderful.  We  rode 27 miles before we called it quits.   I love biking in Vermont in the fall. 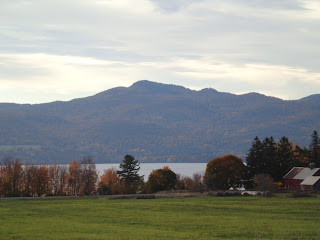 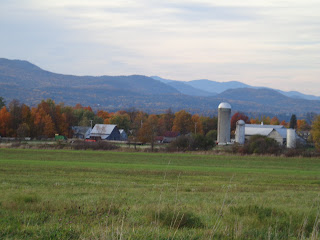 It was beautiful weather in Pa too.

Fall in Vermont is awesome. No way my southern husband would live there in the winter though. ;o)

Fall landscape in your country is really fantastic!
Enjoy the rest of this Sunday!

I always think we have nice color and then I see photos like yours - WOW! So glad you get to enjoy that scenery on your zippy bike. Very nice.

My sister is in the States at the moment. She went to row in the Head of the Charles. They did a bit of touring before the race on Saturday and ended up doing driving through some of Vermont. She couldn't believe how beautiful it was. Especially the Fall leaves. Your State has yet another fan.

Oh so beautiful!!! And I love the "we planned to ride 30 miles, but heck, let's just go ahead and throw down for 65". Well done. Completely awesome on an awesome day!

I always want to move to Vermont this time of year....for about 2 weeks. Then, um...no way! You know how much I hate snow :). Gorgeous gorgeous gorgeous pictures though. Especially love the farm at the bottom...reminds me of my grandparent's dairy farm in Iowa!

I cannot imagine living anywhere else. Beautiful pictures!! Thanks again for coming yesterday. It was so much fun!!

Gorgeous, just breathtaking! I'd spend fall in Vermont in a heartbeat!

If I move to Vermont can I live with you, hubby and the cats? Love the photos. And 65 miles--wow! That's a mega-ride, and looks like a blast. Glad you enjoyed it.

Gorgeous! I haven't been to Vermont since high school. I need to return soon.

Vermont is definitely a place worth visiting. It's so beautiful, what a privilige that you may live there.

And congrats on the longest bike ride of the season, well done!

Wow that sounds like a great ride. Loved all the pics too! Looks peaceful.

Your Tutu for Tatas sounds like a fun event for a great cause too. You are definitely living life to the fullest like your friend Christa.