I had one more bike race to look forward to this fall but the weather gods did not smile on me. 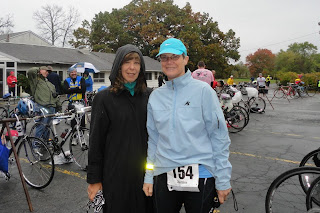 In spite of the above I had my own cheerleading crowd of two who took photos and cheered me on!  Darlene was the best bloggy friend ever to come and cheer in such horrible conditions when she can't run at this time.  Send positive healing thoughts her way!  The one good thing about the weather was she wasn't jealous she wasn't racing or running! 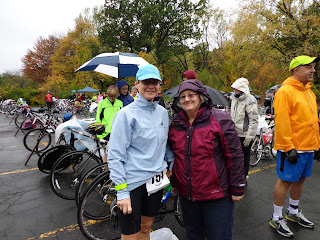 My co worker/friend, Heather, came to watch and cheer me on in spite of a 5 a.m. departure time.  She didn't complain about the weather, the distance or the time involved (12 hours start to finish).

There were people at this duathlon signing up on race day. I would not have done this and couldn't believe people were.  Yet I did travel to do it. Once I commit I'm good to go. 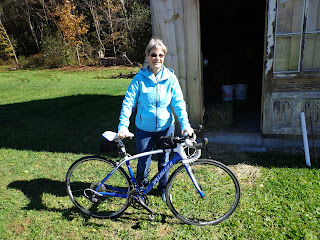 This is Saturday as I'm getting ready. It was a gorgeous day.

Sunday turned out to be everything predicted.  Rainy and cold.  It was around 41 during the race.  I didn't know what to wear and finally decided there was nothing great to wear.  It was what it was.  I wore triathlon shorts and a wicking top with a rain "repellant" jacket.  Ha!

There were 90 people in the race.  The run was 2.2 miles. It went along the river and I'm sure on a different day it would have been quite pretty.  It was flat before it went up a fairly steep long hill but then we got to go downhill too.  I had told my friends I thought I would be about 20 minutes.  My time was 19:59 and my pace was 9:05.  It wasn't too cold and there seemed to just a drizzle at this point.  I was 73/90. 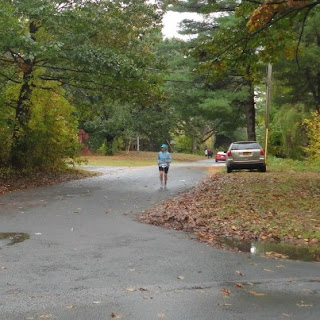 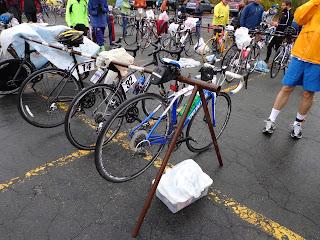 My first transition was 2:10 and I was 69/90.  I had learned from my last triathlon and had a garbage bag for my helmet and a plastic container for my shoes etc. 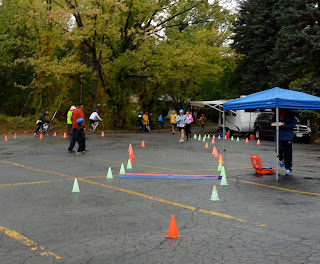 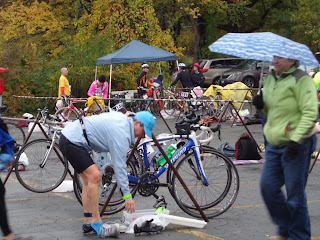 I keep my feet dry how? 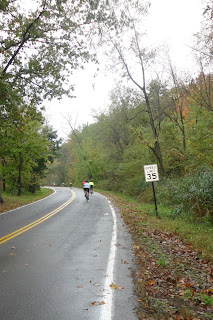 Heading out on the bike.

Then it was time for the bike.  It was billed as hilly and it was in parts but I would say out of my 5 duathlons/triathlons it was the 2nd to the least hilly. For the first half I was riding with a pack of 4 women. We kept passing each other and worked well together.  After the first half we all spread out with me being last, only able to see the bright green coat of one of the women aways ahead.  I did pass a couple of other bikers but I was also passed.  It poured during many parts of the 16 mile bike ride. I definitely slowed down on corners and down hills not trusting the conditions, my bike or myself. There were volunteers at every turn so I didn't have to think about where I was going.  What an awful day to be out there just standing!  I thanked as many of the volunteers as I could.  I found myself trying to read my computer through the rain on it to see how much I had left.  I wasn't loving the bike racing as much as in the past.  My wet coat was clinging to me and felt just plain awful. I wasn't really aware of being cold, more aware of just being horribly uncomfortable.   I ended up doing the bike in 1:04:55. I had told Heather the absolute fastest I would be would be an hour.  Overall I was 68/90. 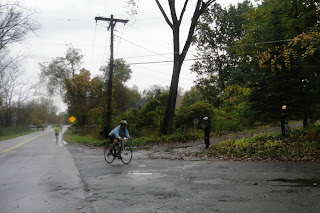 Happy to be coming in on the bike!  Darlene is still hanging
in there taking pics on the corner.

When I went to get off my bike I stepped down and wobbled toward the guy at the timing mat. My legs didn't want to support me. When I went to change my shoes, my legs were really cramping up, I guess from the cold. 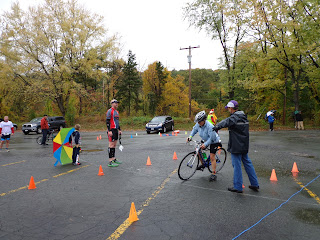 I'm not too steady as I get off the bike.

I headed out to run not giving it a lot of thought as I might have decided not to do it.  I was not aware of going a lot slower than the first time I ran but I did!  But most other people must have done the same as my placement was actually a little better.  I did it in 22:58 for a pace of 10:27.  I was 68/90. 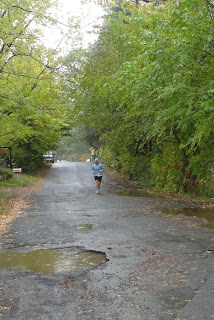 Overall I was 71/90.  I'll take it. I did it.  I didn't quit.  I had fun at times if not throughout the whole thing.  I do love bike racing but I've had two rainy ones in a row now. Next spring I'll be looking for some sunny races.

Post race note: today at home there was a 30% prediction of rain. I took a chance and went for a bike ride.  It poured and poured and poured harder.  I got wetter than yesterday.  I did not have to do this as I was not signed up for anything.  I guess I am just nuts. The good part was it wasn't cold, just extremely wet.

I just can't imagine how miserable racing in that rain would be, we just don't have that here. One marathon I did was in the drizzle the whole way but it wasn't as cold as your day was. I salute you for being so tough and not quit! Congratulations, that takes a lot of guts!! :)

Ugh...I don't like riding in the rain. It's cold and it's scary. YOU are awesome and tough. And yeah...maybe a little crazy. :)

Believe me, if I'd had a choice I would've been out of that tent! I actually pondered taking my sheet to the bath house and at least being dry. Or getting into the van, but I was thinking Bob was there and all our junk was in there. In the end, Luke had teased him into staying in the wet hammock.

wow - you are brave, not giving up despite all that awful weather! We're having lots of rain here, too - my kids have to bike to school thru it most days, which they hate. Keeping fingers crossed for some pretty fall days before winter sets in...

Congrats on your race in the rain! Beautiful race report ... your blogger friend, Darlene, was really great!

Congrats! I don't mind running in the rain but biking? You are braver than I!

That weather sounds awful! Glad you were still able to finish!

It was fun. Glad it was you out there racing not me. Hope your next one is drier.

UGH It was SUCH A COLD DAY!!!!! I'm sorry for all of us who were out in it... Great job anyway- I bet it would have been a complete blast if the weather had stayed as nice as it was on Saturday.

Awful conditions. It would have been a little scary on the bike with the wet roads. Well done on a really solid race.

Well done for toughing it out in horrible weather. You are as hard as nails! Good for you!

Kudos to you for toughing out the weather. I don't know if I would ever ride a bike in rainy conditions.

Good thing you were doing a duathlon instead of a tri that day. Looks like the final results were good.

Glad you were able to finish! Finishing a tough one always feels great!

i can just imagine what that cold wet jacket felt like! ugh! kudos to you for toughing it out and finishing strong!! i know what those weak legs are like off the bike - i am always jello-legged. congrats andrea!