Monday after school I got out on my bike on a flat and fast route.  It was a bit windy but nothing compared to the ride in the Islands.  I put a lot of effort into my ride and negative split it!  It was an out and back. When I got to the turn around I was at a 14.7 pace and at the end I was at 15.0.  I have done it faster before (fresh in the morning?) but I felt I worked hard for a solid 23 miles.  Both C and I hit a pothole as we watched a heron in a swamp.  Then when I got home I disturbed a flock of turkeys in my yard. I couldn't get out of the car fast enough to get a close shot but here is a picture of them running away from me. 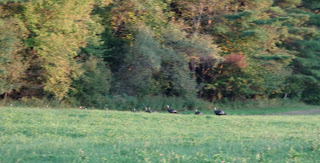 Tuesday I got up early and swam and saw two of my work mates there.  They were fast swimmers and I just may have convinced them to consider a tri next summer. Then when I was leaving I ran into a woman my age that started doing triathlons a few years ago.  It was fun to talk to someone who gets it!  After school I got my miles in at the gym as there was a major storm roaring outside.  I plan to get up early in the morning and take a run in the village and I hope to be home in plenty of time to also ride my bike to work. I have not exactly been Miss Getting There Way Ahead of Time lately so that may not happen.  But I have everything ready being hopeful.  The worst thing that will happen is I will come home after school and ride.  Do you have trouble getting to work on time even when you get up plenty early?

Well, I don't have any more triathlons but I have signed up for a duathlon in October.  Surprisingly enough I am a little disappointed it does not include a swim but I won't have to put that lovely wet suit on.  It is a run, bike, run. It sounds pretty but not flat. Are there bike courses out there that are?  Darlene has told me she will come and cheer me on as it's in New York somewhat close to where she lives.  And of course a race in New York means Target and shopping at the outlets if I so desire.  It's something to look forward to and keep training for.

Working out is keeping me sane these days. It's a bit of a hard year this year and things haven't settle down yet.  It seems like they are when it heads in the other direction.  All three days this week have been tough and my bike ride and two runs after work have been just the ticket to get me home in a better mood.  I'm sure I'm not the only one out there who feels life would be much worse without the sweaty stuff.
Posted by ajh at 8:23 PM

I hear ya. Running every night after work has been just what the doc ordered. It helps that the weather has been perfect too.

I totally agree - Exercise is absolutely essential for mental health!

I'm realizing that there are VERY few tri/du courses that are not challenging!

Awesome that you signed up for a late season du. Keep enjoying this great cycling weather!!

If you are not busy this Saturday, you should do this one: http://rrw4l.com/event-info/

Yes working out keeps all of us sane. Good luck with the duathlon!

Sorry you're needing the exercise intervention to stay sane, but with all you have going on I can believe it! Hopefully things smooth out a little. Very cool about the upcoming du...all those hills you're riding with your fast friends are going to help you on a challenging course.

You are doing well to work out so much with a tough time at work as well. Look forward to following the duathlon training!

You're a bit like a soap-box preacher now with your triathlons. You'll have half the staff of your school tri-ing them soon.

You are right about things being much worse without sweating it out. :)
It hasn't been difficult work-wise, but definitely it hasn't been easy peasy either. I don't know. I feel like I am just dragging.

You always have to love a negative split!

Exercise is important for our spirit and our health and now this is my biggest problem.
Good luck on your duathlon in october.
No troubles here to be in time to work .... because I am not a teacher and I can go between 08.00/09.30 a.m. without any problem.

Running is good for my brain (and the rest of my body).